The Touareg has been one of the best selling crossovers in its class for quite some time but things changed in the past couple of years. This is mostly because the car became too expensive in comparison with the other cars in its class so it started to lose quite a bit. In order to change that a new model is going to be released by the German manufacturer with the 2018 Volkswagen Touareg. They haven’t confirmed the new version for now but the car has been spied testing in Germany and so far it looks quite interesting.

For starters, it seems the design is all new and on top of that, it will also be built on a new platform. Most rumors point out at Volkswagen’s MLB Evo chassis which is a highly modular longitudinal front wheel drive design. However, some also suggested the car may be in fact based on their MQB chassis which boasts a transverse front engine. Even though this is still nothing but a rumor, we wouldn’t be all that surprised considering the Touareg has been slowly losing its customers base. 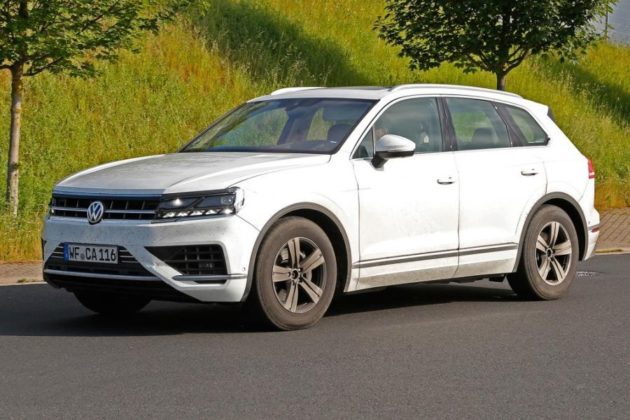 The MQB chassis would offer more room inside the cabin at a lower cost with similar performance. While this may be true, we wouldn’t bet on it. The MLB Evo chassis is far better for an executive crossover and on top of that, the all wheel drive system available for the MLB chassis is far superior to the Haldex-based one found on the MQB. Because of that we would go on a whim and say the car will more than likely be based on their MLB chassis, the same that underpins the Bentley Bentayga.

The fact that 2018 Volkswagen Touareg was caught almost completely stripped of camouflage means only one thing. The presentation is near; we would dare to say that it’s around the corner. According to autoexpress.com, new Touareg will debut at 2017 Frankfurt Motor Show. This means that production will start during this year, while the first vehicles would hit dealership early in 2018. Also, there is a small possibility that this SUV will arrive at local dealerships in 2017. This was nor confirmed nor denied by German Automaker. The only thing left for us is to wait for the final product in Frankfurt and to follow later development. 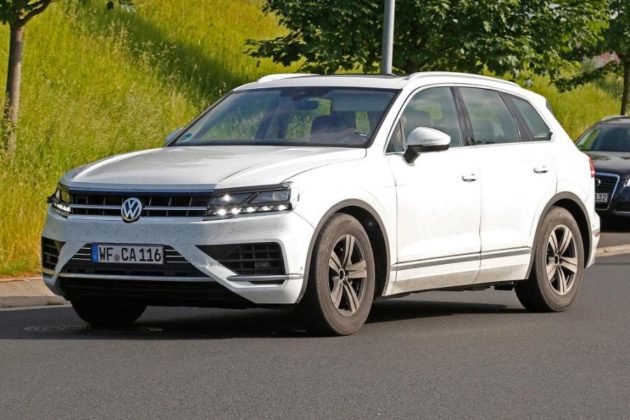 Thanks to the new platform, slight redesign, ton of new technology, and updated engines 2018 Touareg price will have an increase. The most recent starting price was $49,700 and with added value new SUV could cost in the region $51,000. This is the projected price for US market. In the Europe, the price will go from €53,700 to €55,000. The VW company has plans to make the upper trims of this vehicle a premium one which would be able to go against the rivals such is Range Rover. This means that the more expensive versions of 2018 Touareg could be priced at $89,000.

As we said, the 2018 Volkswagen Touareg has already been spied wearing heavy camouflage and it boasts quite a few interesting design choices. The car had its front and rear heavily covered but unusually enough, the mid-part has been left uncovered. Here we can see pretty much an identical design to that of the Audi Q5 which mostly confirms the MLB chassis. The doors extend all the way to the ground covering the side sills and making the car much easier to get in and out in bad weather.

The windows, mirrors, doors and even the roof rails are identical to the new Q5 which is actually very surprising. However, the car gets a brand new front end which seems to be very different from the Atlas which is great because it means it will remain a premium product. The rear of the car seems slightly longer than that of the Q5 which likely implies more trunk space as well as slightly longer rear quarter windows. However, the tail lights as well as the look of the tailgate seem to be quite similar to those on the Audi.

The current car doesn’t really look like any other Volkswagen on the market. This is more than likely not going to be the case with the 2018 Volkswagen Touareg. Considering how close in design the car is to the Q5, we wouldn’t be surprised if the interior of the two cars will also be quite similar as well. The center stack with the wide center console and the Audi-like controls are likely going to be used on the Touareg as well. However, the upper part of the dashboard is more than likely to be quite similar to that found in the Arteon with the long HVAC vents and the minimalist overall look.

There is no question about the fact the 2018 Volkswagen Touareg will get roughly the same engines as the Q5. The base model will likely come equipped with a 2.0 liter turbo-four good for 248 horsepower and 272 lb-ft of torque. Further up the range a 3.0 liter turbocharged V6 diesel with 282 horsepower and north of 400 lb-ft of torque is also going to be available. Some also suggested VW might offer a 3.6 liter naturally aspirated VR6 engine but this is highly unlikely, especially considering the downsizing trend. We would expect them to offer a more powerful 3.0 liter turbocharged V6 offering north of 350 horsepower. This would allow the Touareg to become a true premium crossover and not just another car. All versions will likely come with all wheel drive and either a 7 speed dual-clutch gearbox or an 8 speed automatic provided by ZF.

The second generation of the Tiguan has been released back in 2016 in Europe. However, the US model has just …