The ongoing QX80 has been released back in 2010 and since then the car didn’t really change all that much. It still has the same engine and roughly the same interior as before. Not that long ago Infiniti released a concept with the QX80 Monograph. This gives the car a more modern look as well as a much better interior than that of its predecessor. While at first Infiniti classified the concept as a “design study”, it seems the car might be more than just that. Not that long ago rumors about a new 2018 Infiniti QX80 started to surface and not long after Infiniti’s CEO confirmed the fact the car is going to be built. At this point there are still very few available details about it but there are plenty of rumors which do create the image of a very interesting car.

For starters, Infiniti’s CEO confirmed the upcoming QX80 will be based on the same chassis as the outgoing model and it will most likely get the same engine as well. For us this is a very strange move, especially since the car is based on an aging chassis shared with the older Nissan Titan. However, Infiniti’s CEO said that the chassis and engine would perfectly fit a 7-seats crossover so we will have to take his word, at least for now. Because it will be based on the same chassis as before, it is safe to assume the wheelbase and overall size of the car won’t change much. It should be just as tall and just as wide as before. This means it will still offer roughly the same amount of space inside the cabin which is usually less than the average of its class.

The upcoming 2018 Infiniti QX80 will hopefully get a much more capable running gear, especially if they decide to keep the current chassis. Why? Well, being as old as it is, the current chassis can’t really match its rivals in terms of stiffness or NVH levels. In order to alleviate this problem Infiniti may decide to use an air-ride system. This might be an active system which will react to the road-surface. If this is the case then it should be able to allow the car to feel better than otherwise and it should improve the comfort inside by a good margin. The only drawback of such a system is the weight which would be increasingly worse on the QX80 due to its more than 5,500 pounds base weight.

Exterior and Interior of 2018 Infiniti QX80

Even though the concept was shown as a “design study”, it is safe to assume the 2018 Infiniti QX80 will be quite close in design to it. Why? Well, the concept is nothing more than just a regular QX80 with modifications done to it. The new honeycomb mesh grille, the LED headlights, the new tail lights, the more aggressive front bumper with the integrated shield and even the car-wide air intake are all very possible modifications for the production model. The rear of the car will likely not feature the diffuser-like insert but it should get something at least similar to it. The end result will look a lot like an updated current QX80 rather than an all new model which is a bit disappointing. 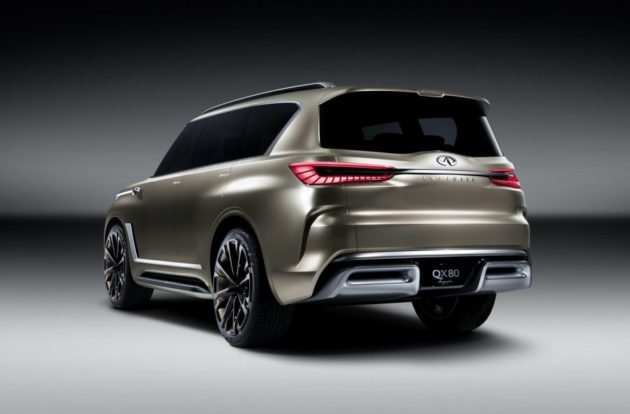 One of the drawbacks of the current car is the interior. Even though it is a luxury SUV it can’t really match most of the other cars in its class. This is because the design didn’t age that well and even though the materials are still good, they don’t really fit this day and age. It seems the 2018 Infiniti QX80 will change all of that. The car is expected to get an entirely new dashboard, new materials such as aluminum, titanium and even carbon fiber in some versions. The seating layout won’t change much but expect it to offer more storage spaces than its predecessor.

Under the hood of new QX80 – No Changes

It has been confirmed that the 2018 Infiniti QX80 will boast the same engine as the current car. This means it will still be powered by a 5.6 liter naturally aspirated V8. We do hope they will revise the engine with a better fuel delivery system and possibly a better cylinder deactivation feature. If they manage to do it then the QX80 should become a car worthy to take into consideration.

So, we know that QX80 will change from the outside, and inside the cabin. Also, we know that it will remain mostly the same under the skin. The only thing that remains for us to find out is when will it become available. This information wasn’t made public by the Japanese manufacturer, but some things are known. According to motortrend.com 2018 QX80 will enter production before the year ends. This info means two things. The first one is that the vehicle is going to be sold as 2018 MY. The second one is that we are going to see 2018 Infiniti QX80 during this year. According to motorauthority.com, you shouldn’t be surprised if this SUV debuts at 2017 Los Angeles Auto Show.

Another unknown regarding 2018 QX80 is the price. Neither Nissan-Infiniti nor some other source named a price for this model. Like usually more info will be know when we get closer to the release date. The ongoing version of QX80 is available at starting price of $66,000 for RWD variant while AWD cost $3,000 more. At the top end a fully packed AWD Infiniti QX80 Limited for 2017 MY is priced at $80,000.

The current Infiniti QX70, previously known as the FX, has been around for a really long time. The current generation …