The current Infiniti QX70, previously known as the FX, has been around for a really long time. The current generation has been released back in 2008 but the car has its roots in the 2003 FX which also shares the same platform and mostly the same engines as well. The car started to lose quite a bit of customers over the previous years and at one point there have been rumors about them discontinuing the model. This is not true though. It seems that a successor is going to be released with the 2018 Infiniti QX70. So far there is very little information about it and not many rumors. Despite that, it seems that the new model might be a bit more interesting than its predecessor.

The car has been actually previewed by the QX Sport concept which was showcased in Beijing a few months ago. It is a completely new shape which is somewhat reminiscent of the smaller QX30. Unlike the previous model, which was based on Nissan’s FM platform, the new car might change that. There are some rumors out there suggesting that the car may in fact be based on a Mercedes platform. Some suggested that it will share its underpinnings with the upcoming GLE in which case things would become quite interesting. Even though this seems a bit far fetches, the two cars do have a similar price tag and Infiniti did this in the past with the GLA and the QX30 which are basically the same car. The release date is still unknown but most rumors point out at a late 2018 release. 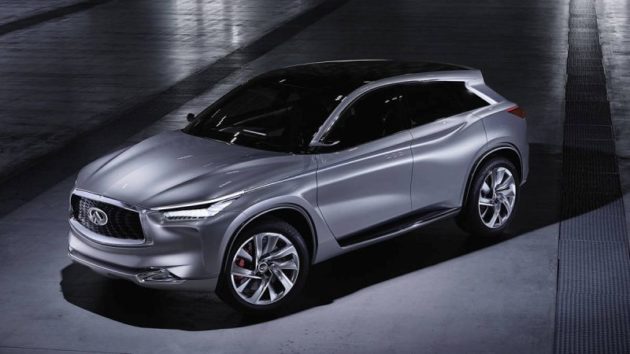 Even though it will more than likely be based on a Mercedes, the 2018 Infiniti QX70 will look completely different. For starters, it is quite safe to assume that the car will share most of its design with the QX Sport concept car which also follows Infiniti’s new design scheme quite well. The front end will feature their new slim headlights and rather large grille and the entire car will feature a rather sculpted look. Unlike the smaller QX30, the larger 70 is expected to feature some interesting additions such as side vents, a quad-exhaust system and a roof spoiler with a coupe-inspired shape.

The concept shown a while ago is unfortunately far from release when it comes to the cabin. Despite that, it also showed us traits similar to those found in the QX30. This means that the production model might feature a similar design as well with a dashboard angled towards the driver. On top of that, we may see some Mercedes parts as well which will only elevate the experience. Like with the smaller car, we do expect the Infiniti to be better than its Mercedes counterpart which is not an easy feat to achieve.

Under the hood of new QX70

Here things are likely going to be a bit more different. The 2018 Infiniti QX70 is likely going to feature a 3 liter twin-turbocharged V6 as its only engine option, at least soon after launch. This debuted a while ago and it is currently available in two outputs. The QX70 will likely be available with both versions. The base model will more than likely be rear wheel drive and provide 300 horsepower and 295 lb-ft of torque. A 400 horsepower and more than 350 lb-ft of torque version with all wheel drive is also expected. Also, unlike the Mercedes, the QX70 is likely going to be offered with only a seven speed automatic. This has been around for some time but it still does its job relatively well. Unfortunately a manual is highly unlikely at this price point.

The ongoing QX80 has been released back in 2010 and since then the car didn’t really change all that much. …