The QX50 has been released back in 2013 but its basic design didn’t change since 2007 when the EX was released. The car has been named the best luxury SUV a few times but times changed and it can no longer compete on today’s market. In order to get back at the top the company is finally ready to release a new version. However, they didn’t say much about it but the 2018 Infiniti QX50 has been spied testing on the US roads. This camouflaged test mule comes only a month after Infiniti released the QX50 concept, so it is safe to assume the car’s development cycle is pretty much done.

The car seen testing was wearing black camouflage but even so we can see a few interesting design choices. On top of that it gives us a great idea about what platform it is going to use. The outgoing QX50 is based on Nissan’s FM chassis, a rear wheel drive platform aimed at performance cars. Well, the new model is nothing like that. It is quite clear the car is based on a front wheel drive chassis, more than likely the same one that can be found under their smaller QX30 or the Mercedes GLA. This is obvious from the car’s long front overhangs and the front wheels which have been pushed back towards the center of the car. This coupled with the car’s width confirms the fact the new 2018 Infiniti QX50 will be a front wheel drive based car. 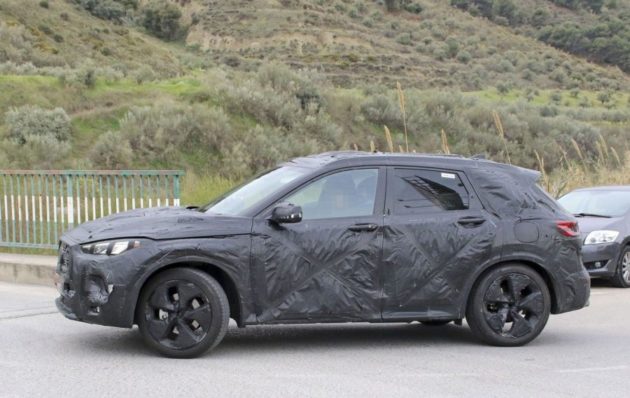 There’s no word on the price at the moment of writing this article. What we do know is that the current version of QX50 starts at $34,650. Considering that QX60 starts at $43,100 Infiniti just doesn’t have the luxury to raise the price bar of future QX50 all that much. The increase will undoubtedly happen but only in excess of $1500 for a base version. This would position the price of 2018 Infiniti QX50 at $36,150 give or take few hundreds. This price will be justified if future crossover stays loyal to its concept form. Then, we wouldn’t have a problem paying for it that much.

As for release, there is no official date set for it. The QX50 is inspired by QX50 Concept which debuted at Detroit. The QX50 Concept is inspired by QX Sport Inspiration Concept which debuted at 2016 Beijing Auto Show. Taking this into account the release date of 2018 Infiniti QX50 will be tied to one auto show. Now, we have no confirmed information regarding this, but named crossover might debut at Frankfurt Motor Show in September. We all know that the vehicle in question is close to completion so this makes sense. It would enter production by the end of the year with sales starting in early 2018.

Is the FWD chassis a drawback?

The short answer you be that no, it isn’t. However, the problem is much more complex than that. A front wheel drive chassis means the car will have a transverse front engine and it will be able to offer more room inside while having the same wheelbase as before. The front wheel drive design is usually better for all-weather use but it takes away from its driving characteristics. However, considering how good the cars based on this platform are we can safely assume the new 2018 QX50 won’t have any problems to become one of the better driving luxury crossovers around. 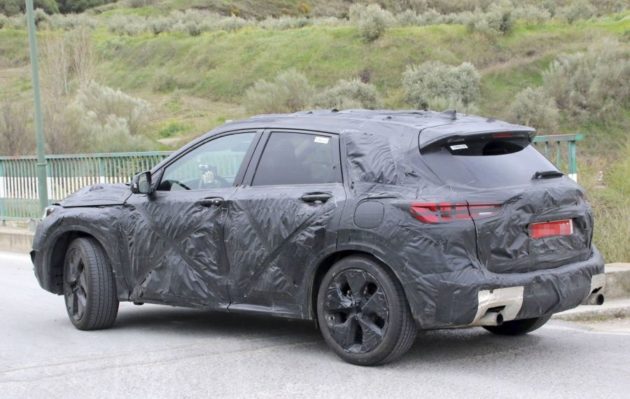 At this point it seems the 2018 Infiniti QX50 production car will be very similar to the QX50 concept shown a while ago. The car boasts the same rather short hood but really wide body. On top of that the wheelbase seems to be quite long while the cabin has definitely been pushed forward. Even though it is camouflaged, it is safe to assume the blacked out pillars as well as the muscular body lines will be used on the production vehicle. The interior of the QX50 is very likely going to be closer in design to that of the QX30 rather than the Q50 sedan. This is because the crossover boasts a completely different chassis with an identical floor-pan to the smaller car. Expect it to have a similar center stack and driving position to the QX30. However, the larger QX50 will likely boast better materials, more features in the base trim levels and more available space for both the front and rear passengers.

The biggest drawback of the front wheel drive chassis is the inability to use a large V6 engine. This has been quite clear ever since the concept was released. Because of that it is safe to assume the 2018 Infiniti QX50 will get a very similar engine to the concept. Expect it to come as standard with a 2.0 liter turbocharged inline 4 unit with variable compression. This is a new technology which has been showcased by Infiniti not that long ago. With it the car should be able to offer right around 268 horsepower and 288 lb-ft of torque.

The engine will vary the compression from 8:1 in high performance mode all the way up to 14:1 in the fuel efficient mode. This will basically allow it to run without its turbocharger which means better fuel economy. However, even with the added power this engine is considerably less powerful than the old V6. Because of that it is safe to assume Japanese manufacturer is going to release a more powerful version later down the road. All cars are likely going to come equipped with a 7 speed automatic that will drive the front or all four wheels.

Also Read:  Shipping a Luxury Car – What You Need to Know

The current Infiniti QX70, previously known as the FX, has been around for a really long time. The current generation …

The ongoing QX80 has been released back in 2010 and since then the car didn’t really change all that much. …