On December 4th Lamborghini will finally show its super SUV. But, thanks to the particular Instagram post we have insight into what look will its interior have. The first thing that we noticed is that the cabin of 2019 Lamborghini Urus resembles a bunch of Audi models. The dashboard features two touchscreens on the central console. The one on the top is going to be used for the infotainment system. The bottom one will have controls for HVAC controls. This kind of setup is what Audi uses on its A8 and A7 models.

The mode selector, ANIMA (Adaptive Network Intelligence Management) is positioned on the lower end of the central console. The recent video teasers that Italian manufacturer was releasing are showing that this SUV will be adapted for use on snow and sand surfaces.

The instrument cluster is also similar to what Audi uses. With small touches of Lamborghini design, the cabin looks modern and luxurious but parallels with Audi Virtual Cockpit are inevitable. The air vents are hexagonal, and they give the interior a somehow uneven look. With all of the hype surrounding new Urus SUV, we expected that it would take a few steps further from its Audi counterparts. 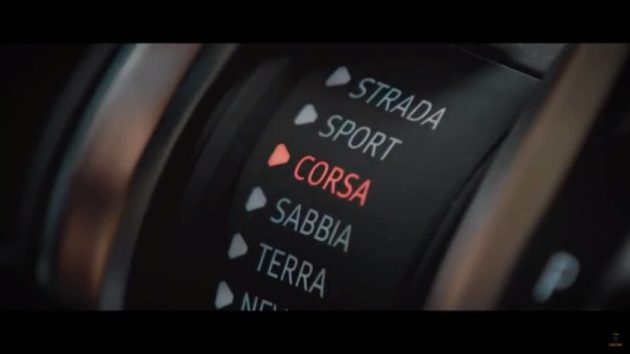 The seats are covered in tin leather, while in between the front pair there is dual armrest. In front of the armrest, there are a couple of holders for cups and more than a few physical buttons. Those who are looking for more details will find them on A-pillars where a set of tweeters is mounted. Across the dashboard, you have leather clothing.

The exterior will be similar to what we have seen so far on the spy photos and the 2012 Beijing concept. Under the hood, you will find a biturbo V-8 engine powered by 650 horsepower. And, if you have seen the recent Lamborghini videos, you probably know that 2019 Urus will have a four-wheel steering. This feature debuted with the release of the latest generation of Porsche Cayenne. Both vehicles share Volkswagen’s MLB Evo platform.

06/13/2017 UPDATE:And, the time has finally arrived for 2018 Lamborghini Urus to be tested on the Nurburgring track. The vehicle was wearing a heavy disguise, but it was nonetheless visible that the SUV on the road was a production-ready model. As it seems now, this turbocharged AWD SUV will share the design cues with a concept presented in Beijing. From the outside, the 2018 Urus will adopt the pointy and sharp design which is typical for all Lamborghini models. The difference from other models from this Italian manufacturer is that interior is going to be in the service of comfort and luxury rather than of speed.

The release of Urus will be the first time since the LM002 that Lamborghini is launching an SUV. The platform on which will it be built is the same one being used by Audi Q7, Bentley Bentayga, and 2018 Porsche Cayenne. The power will come from a plug-in-hybrid powertrain and a twin-turbo 4.0-liter V-8 engine. This unit will be the first V-8 used by Lambo, and it will be used instead of standard V10 and V12 mills. The switch happened because the company wanted more attention of fuel economy rather than only on on sheer power. 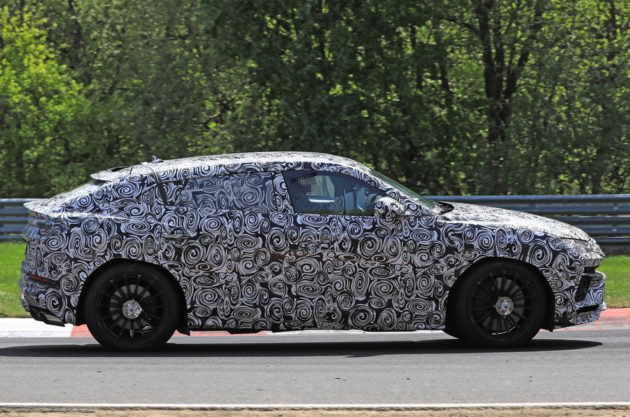 Same as the Aventador, 2018 Urus will be available only with all-wheel-drive with RWD not being an option at the moment. Main competitors will be Bentley Bentayga, Range Rover SVAutobiography, and upcoming Rolls-Royce Cullinan.

At the moment there will be only one version of 2018 Lamborghini Urus offered. The special versions are in consideration, and they would consist of two models. One would be Superveloce beast oriented on performance while other would provide a luxury of the highest level.

The production of 2018 Lamborghini Urus will start during summer. First models are expected on the streets before the year ends, or in the early months of 2018. The price will be in the Huracan range which means that new Urus is going to cost around $229,500.

03/23/2017 Review: Crossovers are currently the preferred type of cars and more and more people prefer to replace their family cars or even sports cars with crossovers. The high performance crossovers has been first seen back at the start of the 2000s and since then many more manufacturers joined this niche market segment. Back in 2012 Lamborghini decided to test the market with the Urus Concept. The car was based on the same platform as the Q7 but it featured a rather unique design. Even though Lamborghini did say at the time that they were going to build it, nothing else was said about it for quite some time. More recently the first camouflaged prototype of the 2018 Lamborghini Urus has been seen at the end result is quite impressive. The car is quite close to the original concept and on top of that, it seems to be as dramatic as any other Lamborghini.

Lamborghini Urus Price and Other Details

Unlike the concept, the production Urus is going to use VW’s MLB Evo platform which also underpins the Bentayga or the new Q7. Despite that, it will be built as an all out high performance crossover, so we expect it to be lighter, more rigid and offer a lower center of gravity than any of its siblings. This will likely be achieved with a unique suspension system and a unique design. So far not much else has been said about it but it seems the car will cost in excess of $200,000. This would actually make it one of the most expensive crossovers ever made which will definitely put Lamborghini on the map. 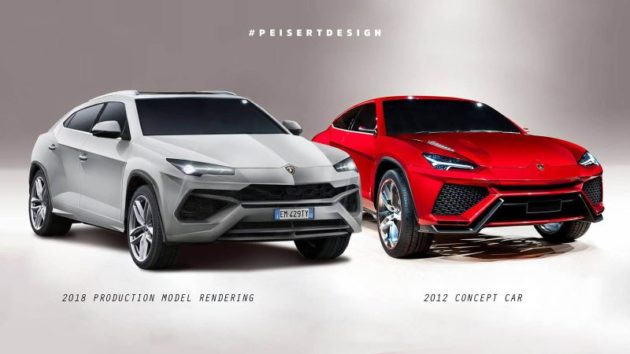 The design of new Urus

The 2012 concept of the car was quite long at more than 16 feet long and 5.5 feet high. It seems that the upcoming 2018 Lamborghini Urus won’t be far off. In fact it seems that the production version of the car is mostly identical to the concept which is really unusual. It seems to boast the same wheel arches as the concept, which have been inspired by the Countach, the sloped roof which gives it the coupe look as well as the massive wheels. However, the production model seems to be missing the really wide wheel arches as well as it seems to have a different rear end. In the front though it seems Lamborghini just took the bumper off the concept and installed it on a production model. This is great because it allows us to get a good idea about the finished product but we would have loved something a bit more modern.

In order to give it the status of a true luxury car, the 2018 Lamborghini Urus is not going to be just fast. The interior of the car will feature 4 individual seats which are likely going to feature heating, ventilation and a massage system and all of them will be adjustable. We expect the car to feature a long center stack which will house the climate controls for the front and rear seats. Also, unlike in any other Lamborghini, the Urus is likely going to feature quite a few storage spaces inside the cabin. We only hope that Lamborghini didn’t sacrifice the rear headroom for the dramatic design.

The concept had a 5.2 liter twin-turbo V10 with 584 horsepower. The production 2018 Lamborghini Urus will be slightly more different than that. It seems that the car might feature a few engines from Porsche. The base model is expected to use a 4 liter twin-turbo V8 which could offer north of 550 horsepower and 550 lb-ft of torque. A hybrid, boasting the same gasoline engine, could easily offer as much as 680 horsepower which would make it one of the most powerful crossovers ever made. Like with most other cars in this class, all wheel drive is definitely going to be standard. We are quite sure at this point that the Urus will receive an 8 speed dual-clutch automatic, the same that can be found in the Panamera. This will give it the lightning fast gear changes it needs without having to sacrifice comfort. Some also suggested that the European market could get a diesel. Even though this sounds unusual, let’s not forget that a considerable part of the market prefers this type of engine due to its low fuel consumption and massive amount of available torque.

The primary aim of new Urus is to be the most luxurious, but even above that, the fastest SUV on the market. Rumors that are going around the automotive circles are suggesting that this model will have 0-60 time under four seconds while the top speed is going to be in the region of 180mph.

The idea of Urus SUV was present for years even before the Lamborghini introduced its concept on 2012 Beijing Auto Show. Five years have passed since then, and we still don’t know the exact date of release for this vehicle. The first spy photos that we have acquired show that Italian car manufacturer is now more than ever serious in completing the work on this luxurious SUV. Regardless of the excitement that we felt when we saw photos those are still only early prototypes, not even close to a production model. It will take some time before the production-ready models hit the streets but that day will come rather sooner than later. First completed products should be available for eye feasting by the first months of 2018. The sales model available in dealerships shouldn’t be expected before the summer months of next year. We at cardissection.com have high hopes that first 2018 Urus will be driven before the autumn of 2018.

Like we already suggested Lamborghini Urus 2018 aims at luxurious SUV’s which also have performance on their mind. Expectations are high for this vehicle, and it terms of price, performance, and luxury it should top its rivals, but that remains to be seen. In matters of taste, there can be no disputes, so we are leaving it for you to decide. Is 2018 Lamborghini Urus going to be better than models such as 2018 Porsche Cayenne, Bentley Bentayga, 2019 BMW X5 M, BMW X6 M, Range Rover Sport, 2018 Maserati Levante, and Infiniti QX70?

Back in 2015 Lamborghini was showcasing the Asterion concept which was their first try for a hybrid car. While the …

In order to fill in the massive steps left by the Gallardo, Lamborghini released the Huracan which is basically an …