The Macan is Porsche’s compact luxury crossover which has been around for little over 3 years now. The car is based on VW’s first generation MLB platform. This means it doesn’t benefit from the weight loses of the newer MLB Evo and it can’t really match it when it comes to rigidity and NVH levels. However, the Macan does offer one of the best driving experiences among all crossovers on the market and on top of that, it is also one of the best looking models around. In order to keep it up to date, Porsche is going to release a new model soon enough. This will likely arrive for the 2018 Porsche Macan MY and it should bring quite a few improvements over the original. The platform will stay the same but the interior and exterior looks as well as the engines are set to change.

08/08/2017 UPDATE: The 2018 Porsche Macan was spied once again. Some time has passed, and the upcoming crossover shed some more camouflage. While we look at it now, we can say that the changes are going to be minor to subtle. The only parts covered just like before are headlights and taillights. This is the mid-cycle refresh, so parts of the car such as light cluster will stay the same. 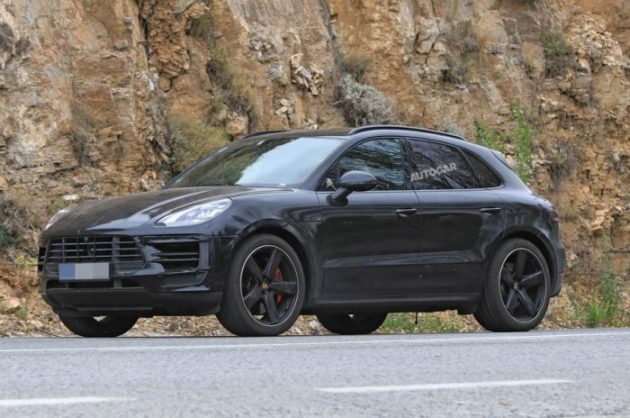 On the side of the bumper, the air vents look different than on the ongoing model. Also, the lights that used to be there are apparently gone. At the back end of the car, the changes are going to be a bit bigger. The slightly modified taillights could receive a slight update. In addition to that, they are going to be connected one to another by a light bar stretching from end to end. This design is the same one that we saw on Porsche Panamera, and that will be featured on upcoming next-generation 911.

The interior was also caught by spy photographer, but it doesn’t reveal too much. It is still packed with ton of buttons of which most won’t make it to production. The many-button dash is getting out of date but it is still more than functional, and it will be transferred onto the upcoming model with slight modernization.

Take a look at the latest set of spy photos.

06/13/2017 UPDATE: Most automakers disguise they prototypes while testing new, or changing existing, vehicles. This practice is a common thing in the industry, but there are some exceptions to the rule. One of the leading manufacturers with a different approach is Bentley, and now one German automaker has followed suit. The company in question is Porsche, and the model which they are currently testing is 2018 Porsche Macan. The test mule is almost entirely naked, but few parts are hidden, and a few that show us the design cues of 2018 Macan.

The 2018 Macan mule which was spotted had both headlights and taillights covered with black stickers which made the car look like the ongoing model. The similarity between the two shouldn’t really come as any sort of a surprise because German car maker is famous for its never aging design. This means that even when their models undergo a full redesign, they don’t go too far away from the original concept.

While looking at the new photos of 2018 Macan, it was hard to determine just what is new with the headlights. On the other side, taillights look like they are coming straight from Panamera or 718 models. Also, the LED stripe that covers the Macan from one side to the other is now clearly visible despite the black camo which is covering the hatch. This seems like its going to be a Porsche trademark shared across the lineup.

Other changes are few, and not exactly easy to notice. We would like to single out refreshed front bumper and fog lights. What’s not visible in the photos is interior, but it will also be updated a bit. The changes will also happen under the hood, where you can expect new or at least upgraded engines but more on that in the rest of the article. Stay tuned as we follow 2018 Porsche Macan development.

Some of the largest drawbacks of the current model are the really bad fuel consumption and the really cramped interior in the back. Unfortunately the latter can’t really be addressed without a massive overhaul. Luckily though, the fuel consumption will definitely improve for this new generation. Some also suggested that the Macan could also receive a revised suspension system. This would alleviate its rather large weight and make it feel more like a sports car and less like an SUV. So far the new model has only been seen in prototype form and the changes seen from the outside seem minimal at best. The price is likely not going to change much. We do expect minor mark ups for all versions but it should still be anything between $50,000 and north of $80,000. 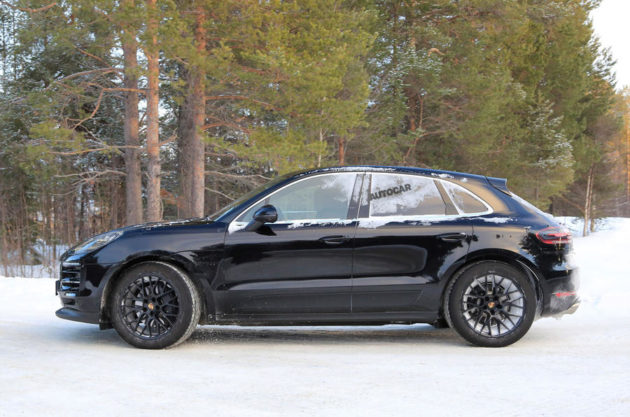 Like we said, the prototype of the 2018 Porsche Macan definitely has a new front end and possibly a new rear as well. In the front it seems to boast a new grille design, different turn signals as well as different LED daytime running lights. The rear of the prototype seems identical at a first glance. However, the car does have a black plastic cover over the entire width of the tailgate. This might suggest a continuous tail light, similar to that on the brand new Panamera.

We would love to see a massive infotainment system like the one in the Panamera. However, considering the price of the Macan and the need of an extensive overhaul for such a large screen, this is highly unlikely. Instead the 2018 Porsche Macan might receive a smaller wide-screen infotainment center and possibly more safety features as standard. On the current model the active safety systems are more than $2,500 extra over the price of the Macan which can be had in a top trim level without any of them. This is unacceptable in today’s market so Porsche will have to comply. The great front seats, the 911-inspired steering wheel and the already trademarked instrument cluster are all going to return on the 2018 model.

Engine and Transmission of new Macan

The current version of the car comes as standard with a 2 liter 252 horsepower inline 4 gasoline engine. This is usually skipped by most people buying it. The optional 3 liter twin-turbo V6 and the 3.6 liter twin-turbo V6 are both expected to be discontinued. In their place the 2018 Porsche Macan will feature two new V6 engines. The 3 liter from the GTS is expected to be replaced by another 3 liter V6, this time one developed in cooperation with Audi. This engine would feature a single turbocharger and it is known to develop 325 to 349 horsepower and 332 to 339 lb-ft of torque. Even though this is less than the current engine, the fuel savings should be substantial.

The larger 3.6 liter engine on the other hand will more than likely be replaced by Porsche’s new 2.9 liter twin-turbo V6. This currently makes in the Panamera 434 horsepower and 405 lb-ft of torque which is considerably more than before. Both of them are likely going to be mated to Porsche’s new 8 speed dual-clutch automatic. Like before, all wheel drive is going to be a standard feature on the V6 models while the 2 liter model will come with rear wheel drive in the base trim level. A manual is still unlikely even though there is a definitely a market for it. 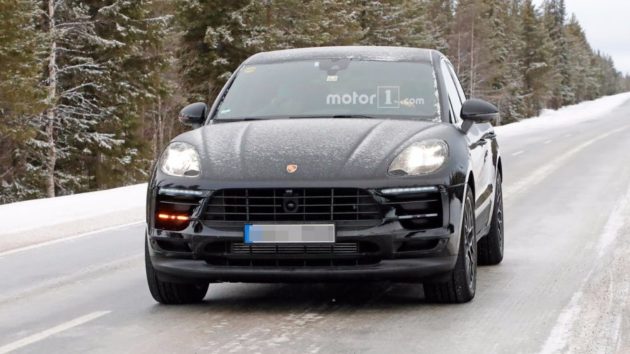 We all know that Macan was a great success for Porsche when it was introduced back for 2015 MY. From then and to today’s time it became one of the Porsche’s best-selling models. That’s why German automaker continues with improvements on its premium model. Because the fact that the model has only been on the market for three years the car won’t undergone any substantial changes but the time for mid-cycle refresh is just about right. The test mules of 2018 Porsche Macan have been spotted on few occasions with latest spy photos coming to us from northern parts of Europe.

When car undergoes testings in Arctic conditions, it means that the manufacturer is bringing the model to a completion. The fact is that spotted Macan is close to being a production model, but Porsche won’t rush the introduction of 2018 MY. They will take things slowly and safely, and that is why the 2018 Macan is going to be introduced somewhere during late 2017 or even at the start of the next year. Also, there are few indications that Porsche might be poised to show us its new Macan at Frankfurt Motor Show, but these new weren’t confirmed. 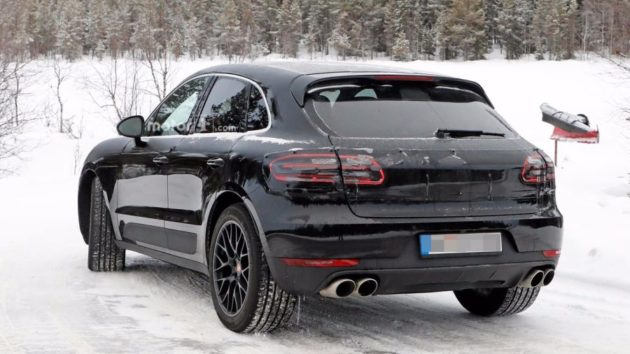 The success that Porsche achieved with Macan was mentioned earlier in the article, but that doesn’t mean that they are ruling the market. The Porsche’s moving into SUV segment while previously dealing only with sports car was met with skepticism from rest of the automotive world, but German automaker proved everybody wrong. Today when offerings from luxury compact crossovers are vast, Macan did everything in its power to be on, or at least close to the top of food chain. The new model which will be introduced for 2018 MY is going to have serious match-ups against rivals such are Mercedes-Benz GLC, Audi SQ5, 2018 BMW X3, Jaguar F-Pace, Mercedes-AMG GLC43, and Infiniti QX70.

The 911 is the quintessential sports car offering incredible performance and one of the best driving experiences on the market. …