06/17/2017 UPDATE: Two years ago Mercedes replaced GLK with the GLC, and now the AMG got their hands on it. Thanks to them we now have 2018 Mercedes AMG GLC 63 and its coupe counterpart. Both vehicles had an introduction at 2017 New York Auto Show.

When it hits the market, this SUVwill be available in standard outfits and Edition 1 special packages. The later one differentiates from regular ones with few small touches. They have a sportier look, details in high-gloss black color, stripes on the side and front in yellow or matte color, and 21-inch cross-spoke alloy wheels. The wheels come with rim flanges in contrast paint. 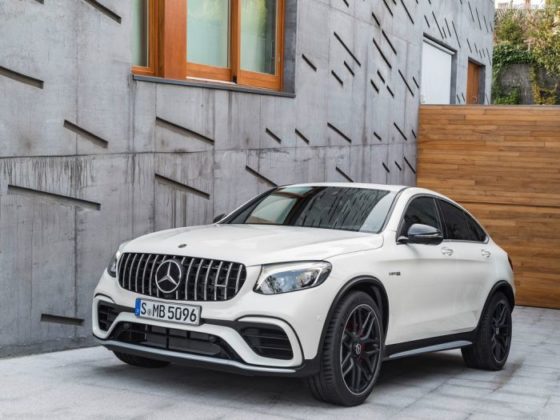 Under the hood 2018 Mercedes AMG GLC 63 has a 4.0-liter V-8 strengthened with two superchargers. Same as in C 63 this engine has 476 horsepower and 479 lb-ft of torque. If you opt for the S version, you’ll get 375hp and 516 square pound-feet of torque. Regardless of previous options, the transmission that comes with named powertrain is AMG Speedshift MCT 9-speeder. This gearbox is multi-clutch, and it is similar to the one found on E63.

The one thing that is different on E63 from 2018 Mercedes AMG GLC 63 is the 4Matic all-wheel-drive system. The E63 comes with drift mode which helps with cornering. AMG decided to strip this option from AMG GLC 63 because the vehicle has a high center of gravity. Nonetheless, with a firm hand on the steering wheel, this USV can do wonders in corners.

02/15/2017 Review: Even though BMW has been the first manufacturer to release a coupe SUV, Mercedes managed to release not one but two models quite fast. The GLE has become quite successful but the smaller GLC didn’t manage to impress all that much. Despite that it still sells quite well and it is the only true coupe crossover currently on the market. The car is both lower and wider than the competition and it looks as good as it gets for this class. However, unfortunately Mercedes decided to restrain the high performance models, at least for now. Rumors about a 2018 Mercedes AMG GLC 63 Coupe have been floating around the internet ever since the car was released. Well, the AMG GLC has been finally seen testing at the Arctic Circle and it seems to be quite impressive.

It was obvious that an AMG model would be released for the car, especially since it shares the entire running gear with the C Class. This means that we are likely going to see nearly identical performance which would be quite impressive coming from an SUV. The top end model of the car, the GLC43 AMG, starts at just over $56,000 which is quite a bit. The GLC 63 on the other hand is expected to start at north of $75,000 which would put it quite a bit higher than the Turbo Macan.

However, unlike the Macan the car would come with an arguably better design and considerably more power. The new model is expected to be released in the second half of 2017 and it should hit the US and European markets at roughly the same time. In Europe the car is expected to cost roughly €90,000 due to all the taxes being applied to the base price. The 2018 Mercedes AMG GLC 63 Coupe will come with the same design as the regular AMG-Package model. However, it will get some interesting upgrades which will make it both more aggressive and more aerodynamic. There have been many people saying that the model is ugly but most of them will change  their opinion when they see the car in person. The GLC Coupe looks like Mercedes took a C Class and added the running gear of an SUV.

The end result looks considerably better than some would expect. The AMG model will double up on everything. The front end will receive a more aggressive bumper and Mercedes’ great LED headlights. In the back it will feature a quad-exhaust system, new tail lights, a diffuser and possibly a trunk spoiler. All of these will not only make it look more aggressive but they will help the car at high speed. The camouflaged prototype also had considerably wider wheels than the C-Class which is an interesting fact as well.

Not many changes are going to happen to the interior of the new Mercedes AMG GLC 63 Coupe. Here the car is mostly going to look like the AMG 43 model. This has been the case with the regular C Class and things are not going to change here. The steering wheel, infotainment system, seats and even most of the features will be the same as on the C-Class. The only real change will be the upholstery and the addition of a sizable amount of carbon fiber.

Like all the other models with this designation, the Mercedes AMG GLC 63 Coupe is going to feature a 4 liter twin-turbocharged V8. This engine will provide 469 horsepower and 479 lb-ft of torque in the base trim level. The S version of the car will bump the output to 503 horsepower and 516 lb-ft of torque. The 7 speed automatic from the C63 model probably won’t be part of the GLC 63. Why?. Because it would have to drive all four wheels as standard which is actually unavailable on the C Class.

It still is unclear if they will go to the 9 speed found on the E63 or Mercedes will tweak the 7 speed on the C63. No matter what the case may be, the 2018 GLC63 Coupe will likely be able to hit 60 MPH in close to 4 seconds while its top speed should be 155 MPH. A future Performance package might bump that to more than 180 MPH which would make it one of the fastest SUVs on the market.

The SL has been Mercedes’ flagship two-seats roadster for years but this is no longer the case. They released the …