Last week 2019 Mercedes-Benz C-Class was spotted almost entirely naked. This can only mean one thing. New C-Class will debut in upcoming months probably on 2018 North American Auto Show. This model will signal a mid-cycle refresh of this vehicle, which will come with changes from both outside and inside.

Latest spy photos were taken in Germany, and they show almost completed car, with updated interior. The cabin which was caught on the images shows interior setup which is very similar to the one on GLC F-Cell which was revealed a few months back in Frankfurt.

On the ongoing C-Class, the most prominent available display is 8.4 inches large in diagonal. The one that we are talking about, seen on GLC F-Cell has a 10.25-inch display. Another thing that will be shared in between these models is a multi-functional touch-pad with that is equipped with handwriting recognition. Despite the recently spotted prototype having analog dials, the chances are that 2019 Mercedes-Benz C-Class will come with a digital 12.3-inch setup. Yes, you guess it right, the same setup available on GLC F-Cell.

11/14/2017 Update: 2019 Mercedes-Benz C-Class will arrive in the showrooms next year. Latest spy photos are showing us just what we can expect from the premium German carmaker. Considering that this is one of the most popular Benz’s models, they have decided to focus on the changes on the inside instead on the outside. While the cabin is getting overhauled, the exterior is only being slightly updated. The spy photos on our hands show two different models being tested. The white colored 2019 C-Class is wearing light camouflage, while the gray one has only headlights and taillights covered.

The outside design won’t be changed, minus revised front fascia and lights on both ends. Mercedes is testing a few models at the same time, and similar changes have been spotted on the models such as Mercedes-AMG C63 and C43. The finishing touches on the exterior will be in the form of brand’s Panamericana grille and a new rear fascia. 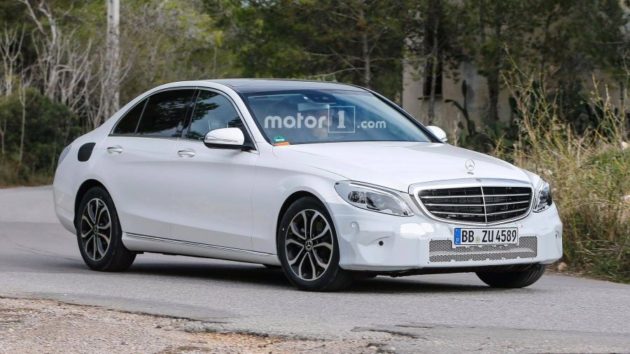 The major redesign will happen on the inside. 2019 Mercedes-Benz C-Class will feature an entirely new infotainment system. The central console is occupied by a small touchpad which will come as a replacement for the control knob available on the current version. The access to home screen will be open through the set of buttons positioned above the touchpad.

As far as the engine bay goes, the changes might happen, but they are not certain at this point. Mercedes has new inline-six and four-cylinder mills that could fill the new C-Class lineup. The top of the range C36 will continue to use 4.0-liter biturbo V-8. Also, you can expect more potent C63 R which will be at the top of performance segment. More aggressive bodywork, with more performance and output figures, is what will come with this variant.

The sales of 2019 Mercedes C-Class will commence on an undisclosed date next year, while the debut might happen during the late months of 2017.

01/31/2017 Review: Released in 2014, the current C-Class is not exactly what we would call old. The car still offers plenty of bang for the buck and it still is one of the better built cars in its class. However, competition evolves quickly so Mercedes is already preparing an update for the model. Even though they haven’t released an official statement so far, the upcoming 2019 Mercedes-Benz C-Class has already been spied testing. The best part about the prototype was the fact it was completely uncovered. It seems that beyond the exterior and interior upgrades, the car will also receive quite a few improvements under the hood. The new model is expected to be released by the end of 2017 or in the early 2018. Its price should stay roughly the same as before. This means that in Europe a base model will start at just over €31,000 while in the US the car will start north of $40,000.

The rather large price difference is there because the two markets get completely different trim levels. Being based on the MRA, or Modular rear-wheel drive Architecture, it means that most of the running gear of the C-Class will remain the same as before. The same thing can not be said about its engines though. The W205 comes with mostly the same engines previously available on the W204 with only minor tweaks. Because of that cars like the new BMW 3 Series or even the Audi A4 tend to outrun the Mercedes in most tests. In order to change that the new C-Class might receive a new set of engines. These will eventually be seen in all Mercedes applications. 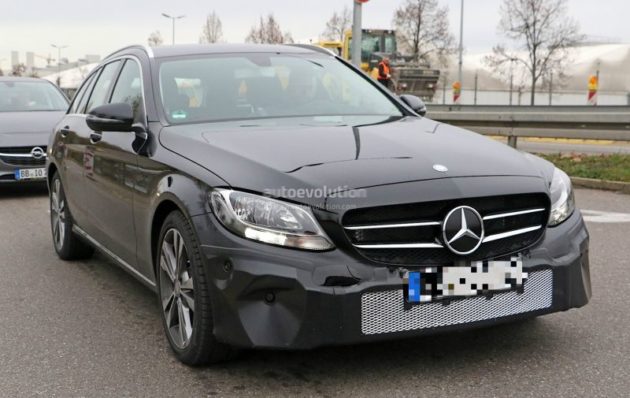 Not that long ago Mercedes said that their S-Class will come with the new generation engines. It is safe to assume that the 2019 Mercedes-Benz C-Class, which will be released later, will also receive the improved powertrains. Mercedes will release a new set of 3, 4 and 6 cylinder engines which are going to be capable of delivering in excess of 130 horsepower per liter of displacement. This means that we may see 2 liter engines with in excess of 260 horsepower and 3 cylinder engines with north of 180 horsepower.

This would allow Mercedes to challenge Audi and their brand new gas engines. The new 3 liter inline 6 petrol engine on the other hand might not be offered on the C-Class. The car is still quite small and it might not be able to fit the longer engine. Despite that, we should see all the improvements that will be used on this engine. The started and the alternator should be replaced by a new starter-generator unit which will save fuel and space. On top of that, we may see an electric supercharger fitted to the C-Class. We do know this type of technology is coming to the S-Class and we may see it in the C-Class quite soon. The 6 speed manual should still be available in Europe while the 9 speed automatic will likely carry on unchanged.

Even though it doesn’t look particularly sporty, people never complained about the way the C-Class looked. It seems that Mercedes noticed that so the updated model will be mostly identical to the ongoing model. So far the prototype of the 2019 Mercedes-Benz C-Class was very similar to what is currently available. The only changes seem to be in the front. There the car definitely boasts new headlights as well as a new bumper. This seems to have a much larger air intake, new designs for the fog-lamps housings as well as a slightly more aggressive look. The rear of the car only seems to get new tail lights and that’s about it. Closer to its release it may also receive new wheels and slightly more color options.

Here the 2019 Mercedes-Benz C-Class will likely continue to trump its competitors in terms of quality and features. Over the older model, the new one will get the same controls for the infotainment system as the new S-Class. On top of that it seems that Mercedes gave the C-Class a brand new steering wheel which is similar to that in their super-car. The instrument cluster has also been revised and to everyone’s liking it has not been completely replaced by an LCD screen.

The SL has been Mercedes’ flagship two-seats roadster for years but this is no longer the case. They released the …

05/11/2017 UPDATE: The 2018 Mercedes-Benz X-Class will enter production later this year in Renault-Nissan plant in the vicinity of Barcelona, …