Home
Volkswagen
2018 Volkswagen Tiguan – Bigger, Faster, and Smarter Than Ever

The second generation of the Tiguan has been released back in 2016 in Europe. However, the US model has just been unveiled a few weeks ago and it debuted with the 2018 Volkswagen Tiguan. The car is quite similar to the European model with a major difference. The US model is only available in the long wheelbase version meaning that it also comes with seven seats as standard. The short wheelbase model, which was similar to the previous version in terms of size, is now unavailable. This came as a shock for most of us but it seems VW wants to dominate the three seats crossover segment.

Unlike the older model, the new Tiguan is using VW’s newest MQB platform. This uses a transverse front engine and a modular design. The new platform features a 4.4 inches longer wheelbase than before and it is 10.7 inches longer. The end result is a car that manages to offer quite a bit more room inside the cabin. The design, inside and out, as well as the equipment level has been thoroughly redesigned. The price is unknown at this point but most rumors suggest a price between $26,000 and close to $40,000. This is actually quite good, especially considering that cars with just two rows of seats cost just as much. This would allow VW to easily get ahead of its three rows competitors while also getting a fair share of the market from their two-rows competitors. The car will be released in the US dealerships soon enough and it is expected to come in quite a few trim levels. 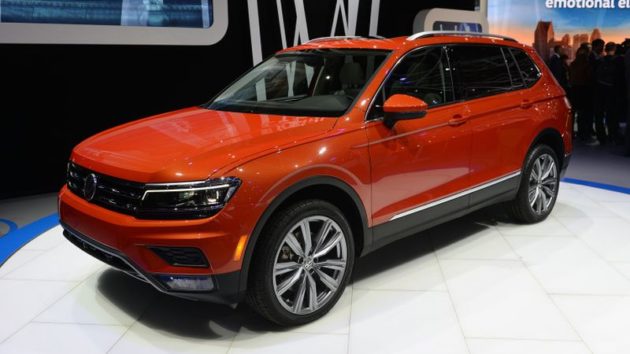 The 2018 Volkswagen Tiguan will come with seven seats in its base trim level. The mid row of seats will feature a 40:20:40 modular design and it will slide and recline. This type of system can also be found in cars like the Discovery Sport or the five-seats Edge. The third row of seats is quite small and only features two seats. Volkswagen expects buyers to only use this row occasionally as it features a minimal amount of legroom and headroom. Also, with it up the Tiguan features quite a bit less trunk space than any of its rivals. The good part is that this row of seats can be completely folded in the floor. This will increase storage space considerably and it will also allow the middle row to recline completely flat. It is worth mentioning though that the all wheel drive model of the 2018 Volkswagen Tiguan will come with this third row as an option. This is most likely due to the extra space taken by the rear differential. 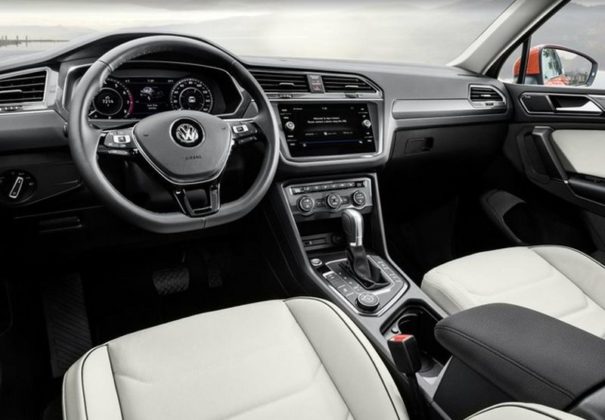 The older model was not the best looking car on the market. However, it did had a personality of its own and that appealed to many. The new Tiguan follows a similar path. It looks like Volkswagen took some inspiration from their larger Atlas but they gave the Tiguan a similar front grille to that of the Passat. The end result is a slightly better looking car which also manages to be quite classy. The only real drawback is the minivan-look which also comes with this type of squared-off design. Unfortunately the new Tiguan no longer looks like a true crossover. An optional R-Line model will add color-coded body inserts, lower front and rear bumpers as well as new side-skirts. This will make the Tiguan a bit sportier in appearance which is always great considering the overall design.

The US 2018 Volkswagen Tiguan will hit the market with a 2 liter turbocharged inline 4 gas engine. This is actually the same unit as before. In this application though it makes 184 horsepower and 221 lb-ft of torque. This is a minimal upgrade over the older engine. Despite that it should be more efficient and with the help of its new eight speed automatic, the 2018 Tiguan should also be better to drive and more reliable. Front wheel drive will come as standard but an all wheel drive system will be available as an option. With the all wheel drive car VW is going to offer a terrain response mode. This will allow the driver to select one of four settings which will make the car behave accordingly.

2018 VW Tiguan was officially presented at the 2017 Detroit Auto Show. There is no exact date on when will the sales start, but first estimations claim that it will be in the markets by the end of April.

New Jetta from VW will debut at the upcoming 2018 North American Auto Show in Detroit. For 2019 Volkswagen Jetta …