The prototype of 2019 Chevrolet Malibu is being tested by Chevrolet engineers. The camouflage is still rather heavy, and this has a good and a bad side. The bad is that we can’t see too much. The good side of it is that Chevy is preparing significant design tweaks and updates. The part of the vehicle which will be changed the most is front fascia, especially the part around daylights, and lights itself. The ongoing version of Malibu is currently in its ninth generation, introduced last year. The means mentioned above that the masked 2019 Malibu will be a mid-cycle refresh.

The engines used on the available Malibu models will be a carryover to the next installment. The only difference might be the introduction of a 1.6-liter turbocharged diesel engine, which features on Chevy Cruze Diesel. The output for this powertrain on Cruze is 136 hp and 236 lb-ft of torque. As for the transmission, voices are saying that a fuel-efficient 9-speed automatic, introduced in 2017 for top end 2.0-liter turbocharged inline four could be used on more units in 2019 MY. 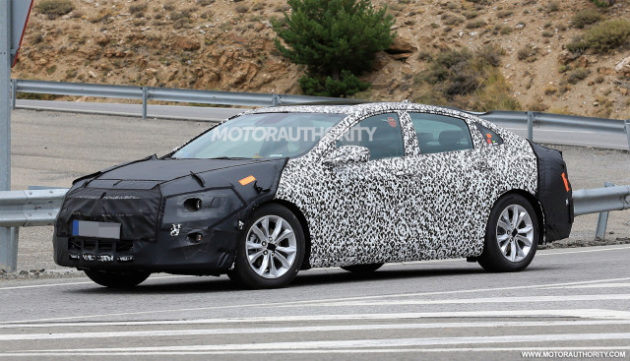 As things stand now, 2019 Malibu will be shown in the first half of the next year, as, as we already mentioned, 2019 MY. The Detroit-based carmaker will try to make the new 2019 Malibu as best as it can because the sedan market is in decline. The crossovers are taking over the market, so an exceptional and upgraded product is needed to stay competitive.

For comparison, the sales of this vehicle have dropped by 30% in first six months of this year compared to the same period last year. This year from January till July they have sold 83,899 pieces. Compared to the Impala this doesn’t sound so bad, as Malibu’s bigger brother dropped by 40% and with only over 30,000 units sold it is in danger of being axed.

06/11/2017: The Malibu is a relatively new family sedan which has been released on the market back in 2015. Since then the car received a few tweaks inside but not much else. However, it now seems that it may receive a considerably larger update with the upcoming 2019 Chevrolet Malibu. This hasn’t been confirmed by GM just yet. Despite that the camouflaged prototype has been spied testing a few times so far. The car looks like it received a good amount of attention on the outside and we wouldn’t be surprised if GM also tweaked the interior. The end result should be a more refined car than before that would also drive better. The latter was only missing a powerful version which might be added with the 2019 model. If GM manages to solve this issue then there is no reason for the new Malibu to become the class leader.

The 2019 version of the car will still be based on the same E2XX chassis as before. This means a front wheel drive design with the possibility of an all wheel drive version. The wheelbase will remain the same as before but the new car might be both wider and lower. The camouflaged prototype seen a while ago managed to keep its finished design pretty well hidden. However, there are some interesting quirks but more on that a bit later.

Taking into account that the spy photos in our hands are the first that we got of new Malibu, we can say that the release date is nowhere near. In upcoming months our newsletter will be flooded by spy photos of this vehicle, and on a later date closer to the New Year’s Eve we might even see a production near model. Looking at the matter from this standing point, early debut at one of the North American Auto shows might be a possibility. We can’t specify at which one (NAIAS, Chicago, New York) but sedan of this popularity will be presented at the main stage. The sales are expected to start mid-2018. The new Malibu will be sold as 2019 MY.

The price remains unknown at this point because we don’t know how profound the changes are going to be. Apparently, the cosmetic updates already started but regarding the tweaks under the skin, we know nothing. Just Like Jon Snow. Joking aside, the ongoing model of Chevy Malibu goes for MSRP of $24,100 for LS edition. Moving across trims the price go up for $2,000 for LT while the Hybrid costs $28,750. Fully loaded Malibu in Premier trim goes deep into mid-$30,000. 2019 Chevrolet Malibu will probably be priced more on higher trims, while the entry LS should retain its price.

In order to see the spy photos gallery click here.

At this point Chevrolet is offering a sporty looking version that only comes with a few exterior details and that’s it. The upcoming 2019 Chevrolet Malibu might bring to the market a new model, possibly an SS version. This would offer more power and a better running gear. If it will happen then expect it to come with new shocks, springs, thicker anti-roll bar, better bushings and even a standard all wheel drive system. This particular model might also bring things like wider wheels and an even lower ground clearance than its predecessor.

As we said, the car’s design will change, there is no question about that. The camouflaged model seen a while ago sported quite a few differences over its predecessor. For starters it seems the blinker lights moved from inside the headlights to a new location lower on the bumper. The car also seems to have a much slimmer grille than before but with a considerably larger intake in the bumper. The headlights also seem to have a more aggressive angle to them. These changes alone would get the 2019 Chevrolet Malibu much closer in design to the Camaro. The car’s rear end sports the same low roof-line as before but the trunk seems slightly taller. This could suggest a rear spoiler which would go well with the rumored sports version. 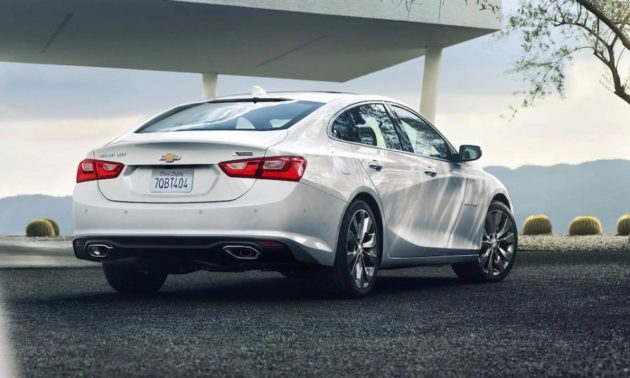 The interior of the current model is very well appointed and it is of a much better quality than any of its predecessors. It seems that the trend will continue with the 2019 Chevrolet Malibu. The overall layout of the cabin will remain mostly unchanged. The rear passengers will still benefit from plenty of space while those in front will get a huge amount of space. There are two large changes expected. First of all, it seems GM might start offering a new fully digital instrument cluster. Lastly, the car could get a set of paddle-shifters behind the steering wheel instead of the unusual switch on top of the gear knob.

Under the hood of 2019 Chevy Malibu

Both the 1.5 and 2.0 liter turbocharged inline 4 gas engines will likely be carried over unchanged. These will continue to make 163 and 250 horsepower respectively. The 1.8 liter hybrid might be carried over as well but it hasn’t been confirmed as of now. Both the 6 and the 8 speed automatic gearboxes are likely going to be discontinued by the time the 2019 Chevrolet Malibu goes on sale. Because of that it is safe to assume the car will receive GM’s new 9 speed gearbox. This would also allow the addition of an all wheel drive system on certain trim levels. The rumored SS model might come with a more powerful 2.0 liter engine with north of 300 horsepower or even a larger V6. In any case, unlike the others this should be offered only with an all wheel drive system.

The Trax has been updated quite recently with the latest model being released last year. However, this doesn’t change the …