05/08/2017 UPDATE: Every day we get info or two about the upcoming ZR1 Corvette. This vehicle has been topping the news stands since it was first time caught on spy camera in August last year. With the latest video, which is coming to us from Nurburgring, it signals that 2018 Chevrolet Corvette ZR1 is getting closer to production. And, from we can see the upcoming ZR1 has the potential to be the most powerful Corvette ever.

A new video and set of spy photos are giving us the clearest view of this car so far. This spotting is not the first time that ZR1 was caught on camera, but this time we can see it from close up, more detailed and doing what it does best – speeding on Nurburgring circuits. Same as before the test mule has sound-deadening exhaust pipes, which are there because the Corvette ZR1 produces more than 100 decibels which are more than it is allowed on this German track. This takes away something from the pleasure of us hearing the full roar of this model, but it will just have to do for now.

Unlike (also upcoming) mid-engine Corvette, this one has a front engine rear drive disposition. It is rumored that the unit powering this model is going to be a new LT5 V-8 which will feature dual-overhead cams and not standard pushrods. The output for this, like we said possibly most powerful ‘Vette ever, is going to be in the region of 700hp. The standard transmission for this beast is going to be a seven-speed manual, while the optional one is going to be a ten-speed automatic featured on Camaro ZL1.

Looking at the design the rear spoiler (a massive one) will remain as it is usually the case for the sake of aerodynamics, but the front end will also be made to assist the flow of the air. At the rear diffuser is going to be more sculpted than before. As for the rest, we can’t tell much because for the most part the car is heavily camouflaged.

The release date for 2018 Chevrolet Corvette ZR1 is not officially set, but we can predict that the sales will start at the beginning of 2018. Possible delay for the late first quarter of the next year can happen, but that remains to be seen. The date that we are more looking forward is the presentation which is going to happen during this year. Late summer, most likely in August is when we are going to see this car unveiled for the first time.

As far as the price goes, we know little to none, but with the effort that Chevy is putting up with this model, it is going to be backed with a hefty price tag. If you need an orientation as for where to look, then put your eyes on the six figures price for 2018 Corvette ZR1.

02/18/2017 Review: The C7 Corvette has been released back in 2013 as a large update for the older C6. Despite being new, the car actually shares a lot with the older models. It still uses the same Y-platform originally released back in 1984, so it has roughly the same suspension system with rear leaf springs. Even though this may seem ancient, the system works great on the Corvette. Like with the older model, GM first released the regular Corvette and then the Z06. However, they haven’t released just yet the all out racing car for the streets. The good part is that this car (dubbed as 2018 Chevrolet Corvette ZR1) is not that far away, especially since the first prototypes have already been seen testing out there.

The new model is more than likely going to be released with the 2018 Chevrolet Corvette ZR1. Even though most rumors suggested it wouldn’t return, it seems that these rumors were not true. The upcoming ZR1 will use the same basic suspension system as the Z06 but it will come with a few upgrades. For starters, some suggested that the car could receive a coilover suspension at all four corners. This would increase its capability during cornering by quite a bit and it would make the ZR1 a lot more versatile. On top of that, it seems that Chevrolet will also improve the design as well as the engine. There is no word on the release date but considering the older model, expect the car to be at least showcased by the end of the year. Its price is more than likely going to be well above $100,000, especially since the Z06 starts at over $80,000. 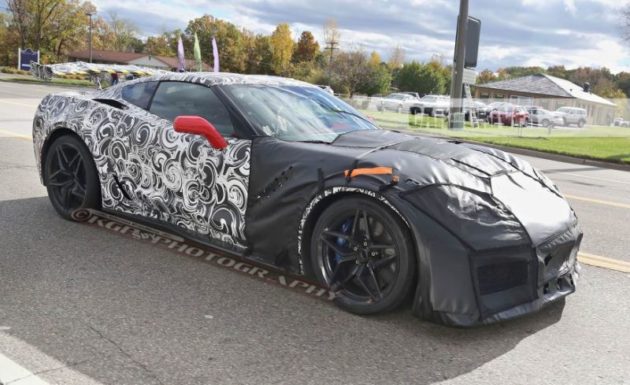 The design – Inside and Out

The actual look of the Chevrolet Corvette ZR1 2018 is not going to change much over the Z06. Most of the changes are going to be made to its aerodynamic kit. All test mules had a large fixed rear wing but the interesting part is that these test mules featured a different wing each time. This might suggest that Chevrolet is testing out different setups for the car. We are not sold on this rumor though. In fact the testing of multiple wings might indicate an active rear spoiler which Detroit-based company wouldn’t want to disclose. This would give the ZR1 the aerodynamic kit it needs to become the fastest American-made super-car on the market. In fact it may even outrun the Viper ACR which is the current record holder. On top of the large rear wing the ZR1 also seems to feature a massive front splitter, which may also be active, a large hood scoop as well as wider rear fenders. The latter suggest considerably wider tires than the ongoing model which still features some of the widest tires on the market.

Up to this point there hasn’t been any type of information about the interior of the 2018 Chevrolet Corvette ZR1. Some people suggested that the car will get a stripped down interior. This is likely not the case though. Like before, the ZR1 is more than likely going to be the most comfortable of the lot which would also be possible thanks to its suspension system. Expect it to feature electric seats, cruise control and climate control, all offered on the base package.

The massive hood scoop of the 2018 Chevrolet Corvette ZR1 might feature a rather surprising engine. Some suggested a similar 6.2 liter supercharged V8 to the current Z06. The ZR1 would only get a larger 2.3 liter supercharger and an altered engine to keep up with the extra boost. While this is possible, we wouldn’t bet on it. We all know GM has been developing a new twin-turbocharged V8 to use in their high performance applications. Rumors say that this engine is more than capable to deliver in excess of 700 horsepower and 700 lb-ft of torque. However, the engine is nothing but a rumor so far. It would make sense for them to offer it with the ZR1, especially since Ford is also going to release a twin-turbo V8 and GM needs to come up with a competitor for it. The ZR1 will more than likely not come with a manual gearbox. Instead, expect GM’s new 10 speed automatic specifically tweaked for track use with the help of added oil and transmission coolers.