After they discontinued the Scion brand Toyota had to release a few cars to replace all those discontinued models. The new 2018 Toyota C-HR is one of these new cars released in order to replace quite a few different models. In fact it replaces not only the Scion xD but also the older RAV4 in Japan as well as the Verso-S in Europe. This is Toyota’s second car to use the TNGA modular architecture which allows it to be lighter, more rigid and safer than any of its direct predecessors. The C-HR is one of those rare production models that looks nearly identical to the original concepts. Toyota first released the C-HR concept back in 2014 and despite having just two doors, the rest of the car is identical to the newly released model. Mostly thanks to this approach, the C-HR is one of the best looking cars around, but more on that later.

Even though the C-HR is going to be sold as a crossover, it won’t be able to do much in off-road. Instead Toyota will be marketing it as an urban crossover that will be able to tackle any challenges it will encounter inside the city. On top of that the C-HR will also provide a comfortable interior, a great engine selection that will be frugal and powerful. Unfortunately Toyota hasn’t showcased the price but considering the design and all the features it offers, it will likely be at the higher end of its class. This means it should start at roughly $22,000 and go up from there. Even though this is more than some would be tempted to pay, the car will also offer quite a few upgrades over the usual compact crossover. 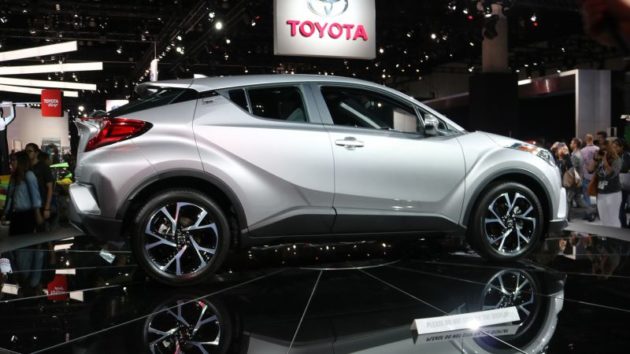 While there are plenty of people buying a car for its exterior, most of them are more interested about what’s inside the cabin. The 2018 Toyota C-HR manages to deliver a rather surprising interior which is definitely above the average. The dashboard is clean and easy to use while the materials are a notch above the average of its class. As standard the car will come with a three-spoke steering wheel, electronic parking brake, 10 airbags, a wide LCD screen on the dashboard as well as a rear view camera. The front seats on the C-HR are also considerably better than those in your average crossover. In order to keep their customers comfortable and safe, Toyota installed highly supportive seats with integrated headrests so the C-HR has an interior that has more in common with a hot-hatch than anything else. The only grief here has to be the visibility for the rear passengers which only get tiny side windows and a really small rear window. 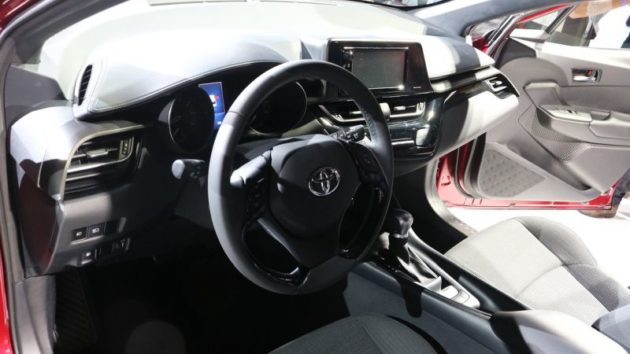 As we said, the 2018 Toyota C-HR looks pretty much on par with its concept. Instead of going for a conservative look, it manages to incorporate Toyota’s latest design scheme. The front end features large headlights but a really slim grille while the sides, hood and rear have a sculpted look. The wheel arches are wider than most while the back of the C-HR has a lot more in common with the Civic coupe. It sports the same type of roof spoiler and trunk spoiler for a really sporty look. The rear doors have really small windows which are angled in order to create the look of a true two-door crossover. Toyota also confirmed a while back the CH-R will be available with two-tone paint schemes.

The US model of the 2018 Toyota C-HR is only going to be available with a 2 liter naturally aspirated inline 4. This will provide 144 horsepower and 140 lb-ft of torque which is actually quite a bit less than some expected. Front wheel drive will be the only offering which is understandable, especially when considering the overall target of the car. A CVT gearbox and an electric power-steering system are also offered on the car. The International model will also come with a 1.2 liter turbocharged 4 cylinder with 115 horsepower and 140 lb-ft of torque. Some markets will also receive a 1.8 liter hybrid, the same engine found in the Prius. With a combined output of 121 horsepower and a fuel efficiency of over 40 MPG, this would be perfect in a busy city.

The new C-HR has been around for some time now. It’s been driven; it has been presented on numerous occasions, it has undergone various tests. There just isn’t anything that we don’t know about it. We are aware of the specs, the size, the performance, the dimensions, the engine options, top speed, fuel economy, etc. The is the only thing that we don’t know or anybody else as a matter of fact. How does it feel to own one? The car is not available in dealerships, but it will be soon. We kid you not! The official worldwide dealership release is scheduled for April of 2017. So, there you have it. If 2018 Toyota C-HR is the car of your dreams, desires, needs or simply the one that you like and can afford then head for the nearest Toyota saloon and purchase on of your own. And, yes, let us know how that feel. 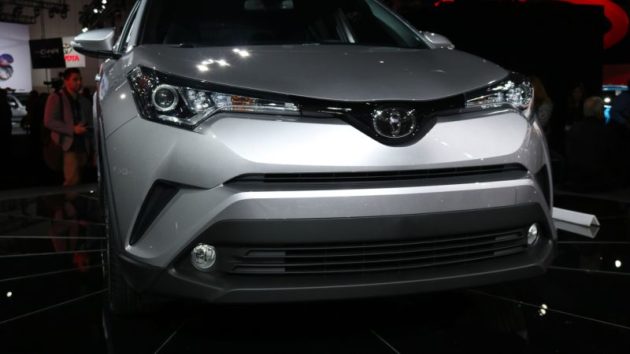 The Toyota C-HR is a new car in the segment, replacing some of the Toyota’s models that were present on markets in Europe, North America, and Japan. As such, Toyota is still not sure what kind of reception will this crossover have, but they hope for the best. The design is the standout part of this vehicle bu it also doesn’t lack any other features. As far as the sales go, we will update you after the full year passes but in the mid-time let see the models with which C-HR is going to share the market. You shouldn’t be surprised by the fact that most of the competitors also come from far east. It’s just that this part of the world has a feel for funky crossovers. The rivals for 2018 Toyota C-HR are Kia Soul, 2017 Mazda CX-3, 2018 Nissan Juke, Kia Niro, 2018 Jeep Renegade, Fiat 500X, and Honda HR-V.