The Juke has always been a car that gave people a love or hate vibe. Its quirky looks and nice interior made many people buy it. In fact it was one of the better selling crossovers in its class on the US market which is not an easy feat. However, the car has been around since 2010 and in the meantime it didn’t change a bit. It seems that a new model might be heading to production with the 2018 Nissan Juke. The first concept has been already showcased by Nissan a while ago with the Juke EV. This comes with a brand new design scheme and a new powertrain. While the latter might not go into production as soon as we hope, the concept looks quite interesting.

There have been many people saying that the Juke EV is nothing more than just a concept. However, let’s not forget that the first generation of the Juke concept was actually released with minor modifications. This will likely not be the case but the end design should still be quite similar. For starters, the new Juke is going to make use of a new platform. The older B0 chassis will be replaced by Nissan’s CMF-B chassis which also underpins the brand new Micra. This will allow them for a longer wheelbase, a wider overall car and better structural rigidity. On top of that the new platform is definitely lighter than the one before it. These upgrades should allow the new 2018 Nissan Juke to hold its own against competitors like the Mazda CX-3 or the brand new Toyota C-HR. 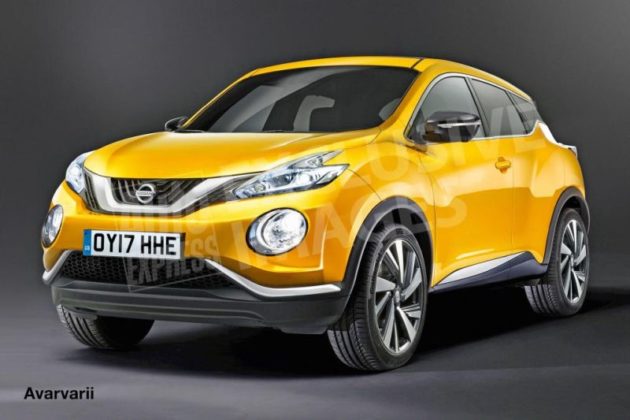 Nissan’s concept for the new Juke is quite impressive. They showcased a four-door compact utility vehicle, very similar to the original C-HR concept. In the front the car features Nissan’s new V-shaped corporate look which includes a large grille and really slim and swept back headlights. The same type of design was also used on the new Altima. The quirky round headlights currently found on the Juke are likely going to be replaced by new V-shaped fog-lamps. These would still get the same spot as before but the overall design will be more aggressive.

The production model will likely feature a similar set of proportions with a longer hood and a coupe-like design. The car will feature four regular doors with the rear doors featuring hidden handles. This trick was also used on the new Micra. In the back the Nissan Juke 2018 is expected to continue with the coupe-inspired look. A small roof spoiler, a dual-exhaust and even V-shaped tail lights might end up on the production version of the car.

The concept for the Juke features a rather futuristic cabin which is unlikely to be seen on the production car. However, Nissan released the all new Micra not that long ago. Considering the price of the two cars we would expect them to feature a rather similar set of design cues. For starters, the steering wheel, infotainment system and climate control should all be identical. The Juke will likely receive similar HVAC vents to those found on the concept while the seats will more than likely offer much better side bolsters.

There are rumors about the 2018 Nissan Juke receiving a new hybrid powertrain. This would use a similar powertrain to the Note e-Power concept. The gas generator would be a tiny 1.2 three-cylinder turbo while the electric motor would drive front wheels. A battery would most likely be installed with an all electric range of over 50 miles. The end result should be a great competitor for the Chevy Volt without the dull sedan look. On top of that, the US model is also expected to receive a 1.6 liter turbo-four with anything between 160 and over 200 horsepower.

The same engine can be found in certain Renault applications where it makes as much as 225 horsepower. The European market could get a 1.2 liter turbo-four and a 1.6 liter diesel. All cars will more than likely come with a six speed manual as standard while some models will also be available with a dual-clutch. So far it still is unclear if the new Juke will receive all wheel drive as an option, but we hope it will.

Japanese car manufacturer hasn’t set a release date for new Nissan Juke, but according to autoexpress.com, we should see new Juke by the end of 2017. The primary focus for the Yokohama-based company is the release of the new Micra model which is almost set to go. After you see this supermini model on the market, you can expect Juke to follow shortly after. The first glimpse of the new prototype is expected during the summer in the form of a concept, or if we are lucky, Nissan will start testing new Juke so we could be in for some spy shots. If the everything goes to plan that British magazine presented us with, we could have 2018 Nissan Juke on our hands before the year ends. In worst case scenario we can expect that new Juke sees the bright light of the day with first months of 2018.