The new Qashqai has been released back in 2013 and since then it didn’t change all that much. However, it seems that the car is going to receive a rather large update with the 2018 Nissan Qashqai model which is set to be more than just a mild facelift. For starters, the new car will more than likely receive a new design, likely at least a new engine and even some changes inside the cabin. The end result should be a better overall package that will offer the space of the current model coupled with more style and hopefully power as well. Unfortunately Nissan has not offered the release date up to this point but we may see the car sometime in the late 2017. Its price is unlikely going to change much meaning it will still start around €18,000 which is actually in the lower end of its class.

Like pretty much all of its rivals, the Qashqai is based on a unibody design. In fact, it shares quite a bit with the X-Trail and its US version, the Rogue. However, the Qashqai does get a sportier suspension setting and it is noticeably smaller than the two. The 2018 Nissan Qashqai should stick to the size of the current model. However, the running gear is expected to change. The current car is quite good to drive and really compliant on the road. Because of its tough suspension though, it might feel a bit too bumpy at times. The new car should solve most of these problems by getting new shocks and springs which should keep the way it drives unchanged but give it a more comfortable ride. 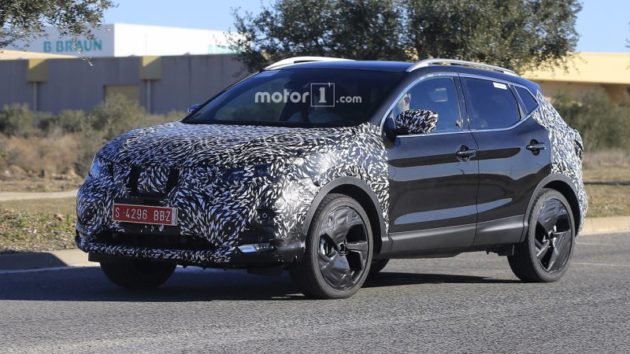 The design of 2018 Nissan Qashqai

One of the largest changes we are going to see on the new Qashqai is going to be the way it looks. Even though the current model still looks fresh, the US Rogue has already received a new update. While this may not mean much for some, it is actually quite important. Because the Qashqai and the Rogue share the same chassis and many other components, it is more than likely it will also receive the changes found on the Rogue.

Not much can be conjured up from heavily camouflaged test mule that we have seen but some things can be noticed. The front end is going to be the part most heavily restyled in order to bring it closer to their V-motion design scheme. For starters, the grille and headlights will be all new. The Nissan Qashqai 2018 will get a much more aggressive design with a squared-off grille and integrated headlights. This will make it seem a bit more aggressive and also more mature, things that were missing from the current car. Its rear end is also expected to receive a new set of tail lights and possibly a new bumper as well.

Most of the interior will remain the same as before. The materials and equipment level will continue to be well above the average of this class. However, there will be some upgrades. The most notable will be the steering wheel which will change from the current old-looking one in something a bit more modern. The 2018 Nissan Qashqai is more than likely going to receive the new three-spoke wheel found in the new US Rogue which is not only smaller but considerably more attractive than the older one.

Because the 2018 Nissan Qashqai will be sold in quite a few markets, it will also feature quite a few engines to meet the demands in each particular area. The base car will continue to feature either a 1.2 liter turbocharged petrol engine or a 1.5 liter diesel. Some markets will also receive a 2.0-liter naturally aspirated inline 4 engine. This is a rather old generation unit sold in areas like Russia or Brazil.

The 1.6 liter diesel with its 129 horsepower as well as the 1.6 liter turbocharged petrol engine with its 161 horsepower are expected to be carried over mostly unchanged. However, there are some rumors saying that the Qashqai will also receive a more powerful powertrain. This could be the 1.6 liter turbo inline 4 usually found in the Megane GT. This engine is known to make close to 200 horsepower and 200 lb-ft of torque and it would be a great addition for those looking for a more powerful all around vehicle.

The compact crossover segment is one of the most growing ones in the car industry. It’s been years since crossovers toppled family sedans as most selling vehicles. At the summit of this segment stands NIssan’s Qashqai but even as such it has competitors. Some of its closest rivals are 2017 Hyundai Tucson, Suzuki Vitara, Kia Sportage, and VW Tiguan.