02/24/2017 UPDATE: The first generation of Expedition debuted back in 1997, and since then the SUV has undergone various updates and upgrades, but it has never been entirely redesigned. Finally, the time was about right, and Blue Oval presented us with fully redesigned Expedition for 2018 MY. 2018 Ford Expedition is new SUV, on a new aluminum platform and has improved design.

Compared to the previous installment new Expedition has c-shaped headlights which apparently took its design after the all-new F-150. The grill which was positioned horizontally remains but it now has a much smaller spacing in between bars, and depending on the trim level you can choose different grille. From the first look at the front end of 2018 Expedition, you can see that everything is bigger than it was on the outgoing model. The hood, the grille even the Ford logo. The hood is now blessed with a more angle-kind look which gives this great SUV a more aggressive look which is something that almost every automaker wants to do with their car.

The beltline was magnified, and C-pillars also grew. Ford did the same with Explorer, and it did the job there so that it will do the same here. New body-line now starts at the front end on headlights and finishes at the back with taillights. The car is given a sports side with the addition of rear spoiler. 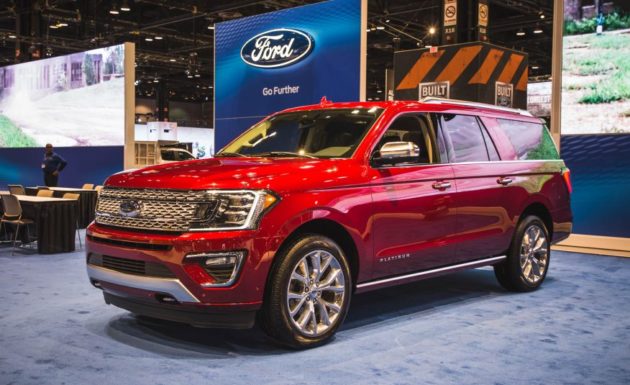 If you considered outgoing Expedition to have a round look, you wouldn’t think the same of the current model. The new prototype has a boxier look which was mainly contributed by the rear end. Taillights are all new, C-shaped and in combination with large rear bumper make Expedition look bulky.

As far as the interior goes, the air vents are all new, and the infotainment system is Ford’s own Sync 3. The wheel is also larger and has thicker hand grips. All round opinion after looking at the interior of the new Expedition is that this part of the car was modernized more than it was redesigned.

Under the hood, you will find Ford’s upgraded 3.5-liter EcoBoost V-6 which will be mated to the Ford/GM all new ten-speed automatic transmission. The Michigan company didn’t release output numbers for this model, but according to topspeed.com, they will be the same as they are on the all-new F-150. That means that it will be powered by 375 horsepower and 470 lb-ft of torque. These numbers will make the new 2018 Expedition one of the most powerful suvs on the market. Count out new Durango, of course.

The current Expedition has been around for nearly a decade but that’s not as evident as you might think. The engine is rather powerful and quite efficient for what it is and it is the last tow-capable Ford SUV on the market, at least in the US. There have been some rumors suggesting that it was going to be replaced by a unibody crossover. Luckily these were nothing but rumors. Last year we have seen the first test mules for the upcoming 2018 Ford Expedition and things looked promising. The car was clearly based on the F-150 but features a completely different rear end. Well, it seems that the production version will be a bit more different than that.

For starters, let’s start our preview with the chassis. The Expedition is going to boast a fully boxed ladder frame chassis and more than likely a fully independent suspension. The latter would be a departure from the F-150 but it will allow for much better on-road manners. The body, just like with the F-150, is going to be made out of aluminum. This will allow Ford to shed as much as 1,000 pounds from the total weight of the Expedition which currently sits at more than 5,500 pounds. Thanks to that, the new car will become better to drive, more comfortable and a lot more efficient. Despite the high tech building materials, the new 2018 Ford Expedition is still expected to cost right under $48,000 for a base version. The EL model will likely start closer to $50,000 which is still very good. 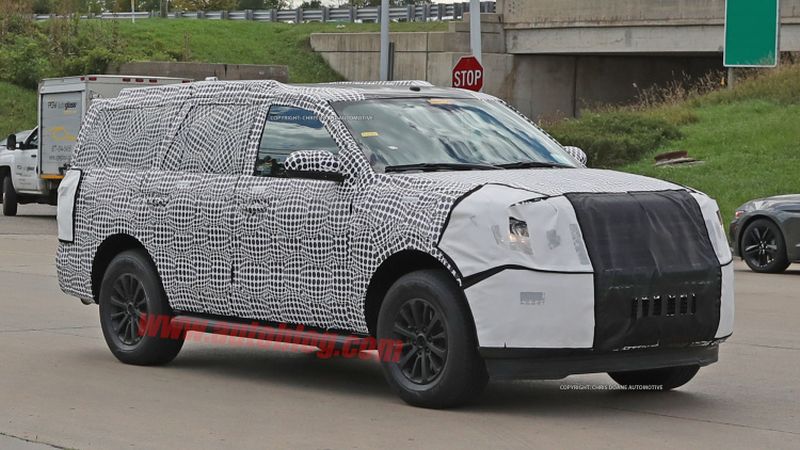 The design of new Expedition

This is the most interesting part about it. There have been numerous rumors, and spy shots, that suggested the new model will get the same front end as the F-150. This happened in the past so it was not unusual. However, Ford took quite a bit of people by surprise when the latest prototype had an all new front end. The new model looks a lot more similar to the Explorer with an angled front end, larger and swept back headlights and even a more aggressive bumper. These changes would allow the Expedition to compete with the European and Japanese offerings with more ease while also giving it a unique character.

This is also going to be a rather interesting surprise. Just like with the exterior, the 2018 Ford Expedition is more than likely going to receive a unique interior. Ford has not confirmed this as of now but they did hint at a few things. For starters, the new Expedition will get more luxurious than before and even the base model is going to feature more gear. On top of that, some of the design might be shared with the Navigator in which case it will easily become one of the better models in its class.

Ford Expedition – Under the hood

The current model sports a 3.5 liter V6 and interestingly enough, things will not change with the 2018 Expedition. It seems that the SUV will get an all new generation 3.5 liter EcoBoost V6 which can also be seen in the latest F-150 and in the Raptor. This engine can now make well over 470 lb-ft of torque and in the Raptor, as much as 450 horsepower. The one that will power the Expedition is likely going to make right around 420 horsepower in order to become a problem for both GM and Nissan. Rear wheel drive will be standard with an optional four wheel drive. The car is also likely going to receive Ford’s new 10 speed automatic which will also be available on the F-150 truck. A smaller engine might also be added to the range at a later date.