After many rumors and spy shots of test mules, the 2018 Ford Fiesta has just been released and it is very impressive. There are some major differences between it and the older model but the car is still using Ford’s B Global car platform. This time around it has been further tweaked to accommodate a larger car which should be more comfortable and better to drive than before. There are some downsides to this new design though. For starters, the price will increase quite a bit over what the current model retails for. Why? Well, Ford just released the new Ka+, a four door hatchback which slots right under the Fiesta. In order to make room for it, the 2018 Fiesta is expected to cost closer to €14,000 for a base model. We are not so sure this is a good pricing scheme, especially since there are quite a few cars at the same price point, or close to it, which are usually better than it.

However, the new Fiesta might be as good as Ford says in which case it would not be such a bad deal. Let’s take a closer in-depth look at the new car and see what it has to offer. Like we said, the Fiesta is still using the same chassis as the previous model. This time around though it features a longer wheelbase and a wider track. Ford hasn’t said much but it seems that the rear suspension system with a solid axle might change to at least a semi-independent setup. This would not only improve the way it drives but it would allow for more trunk space and considerably better comfort over bumpy roads. So far Ford only released four versions of the upcoming car. The Titanium, which used to be the former top end trim level, the Vignale, the new high end trim level, the ST-Line which is going to look like an ST without the performance as well as the Active. The latter is the brand new crossover trim level, similar to the Cross Polo which has been around for quite some time. 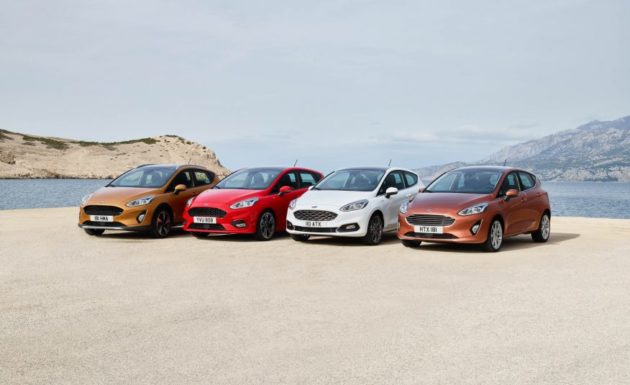 One of the main selling points of the previous car was the way it looked and we are glad to say that the 2018 Ford Fiesta is even better. Ford decided not to scrape the old design entirely. The front end is now a lot more expressive than before with the same Aston-like grille but with slimmer and swept-back headlights. All models get vertical fog-lamps with the exception of the ST-line version. The rear end has been heavily redesigned as well. The tail lights are wider than before and mounted higher up. The tailgate is also wider and opens up to reveal a considerably larger trunk than the older model. The four new trim levels come with unique perks as well. The Vignale gets a unique front grille and headlights, the ST-line gets an all new body-kit while the Active gets body cladding all around and a higher suspension.

Even tough the current model is still fine, it is starting to show its age. The 2018 Ford Fiesta gets one of the best interior we have seen in a car at this price point. The instrument cluster is brand new with a large center screen, the materials are on the same level with Mini, VW and even Audi while the space has grown quite a bit from the older model. The dashboard is not the cluttered mess from before but rather something a lot more appealing. There is a new 6.5 or 8 inch screen which hovers around the center stack where most of the controls are. The driving position is also lower than before which should improve the driving experience quite a bit.

Under the hood of new Fiesta

So far Ford only released three engines for the 2018 Fiesta. There is a 1.1 liter naturally aspirated unit offering 69 or 84 horsepower. This will likely be available only in some markets. The 1 liter EcoBoost carries over unchanged with 99, 123 or 138 horsepower. A 1.5 liter diesel with 94 horsepower is also an option. In the near future the ST will also be released. At this point there are some interesting rumors about it getting a pumped up 1 liter EcoBoost with as much as 200 horsepower but nothing has been confirmed at this point.