The updated 2019 Ford Edge is expected to debut in the next few months. The complete overhaul of this vehicle is scheduled for 2022, so with 2019 MY we expect only minor makeover. The process is in the progress which is confirmed with Blue Oval testing 2019 Edge in the vicinity of their Dearborn, Michigan plant. The prototype is still wearing a lot of camo, but this is our best look at this SUV yet.

Despite the camouflage, there are a few notable tweaks compared to the previous set of photos. The changes are taking place both upfront and at the back. The headlights and taillights will get a new shape. Other changes include slight changes to the fascia and a new set of wheels. Regarding the interior, no info is available as of yet, but we are sure that the tech will be upgraded. 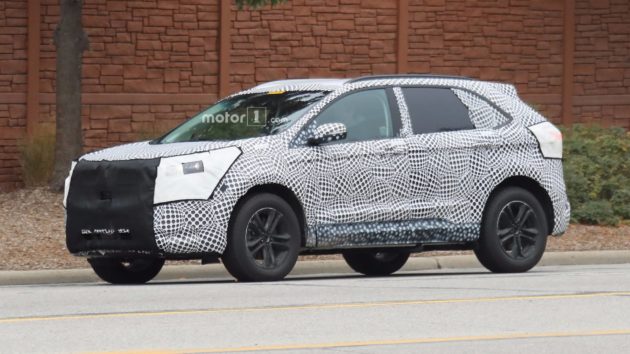 The platform and underpinnings will be shared with Lincoln’s MKX model. The overall exterior design, won’t be changed all that much. The places where significant shifts will occur is under the bonnet. The carryover units are going to be a 2.0-liter and 2.7-liter EcoBoost mills, together with a 3.5-liter V-6. The changes regarding the powertrains will come in a shape of a new nine-speed automatic gearbox. This transmission will replace the old six-speed, and with it, new 2019 Edge should receive additional power. The current SUV has 315hp with mpg of 29 miles per gallon.

Like we mentioned significant changes would have to wait until 2022. With upcoming 2019 MY Ford might introduce premium Vignale trim. 2019 Ford Edge will debut in the forthcoming months. The two auto shows where it might land are 2017 LA and 2018 NAIAS.

07/31/2017 Review: Released in 2014, the current Edge is starting to show its edge. It seems that in order to remain competitive, an update is going to be released with the 2019 Ford Edge. So far it looks like this will receive some exterior changes, likely a revised set of engines and possibly a more capable running gear. Most rumors also suggest that the car’s interior may get a revision as well. This has yet to be confirmed at this point but considering the Edge is not really all that modern when it comes to its cabin, it wouldn’t be that far fetched.

The car is still going to be based on Ford’s modular CD4 architecture. This doesn’t mean its suspension system will remain the same as before though. One of the biggest problems with the current model has to be its driving characteristics. Despite looking like a sports crossover, the car is not nearly as good to drive as it should. The steering column is by far one of its biggest problems as it is just too sensible off-center and not that responsive on-center. It seems the upcoming revision might change that with a new steering rack but this has yet to be confirmed.

On top of that, the higher end versions of the car may receive an updated set of shocks. These would provide a feature that will allow them to adapt depending on the driving mode chosen by the driver. The end result should be a car better to drive while not losing any of its comfort characteristics. The brakes might also be revised and this stands especially true for the base models which are currently one of the worse cars at their price point. 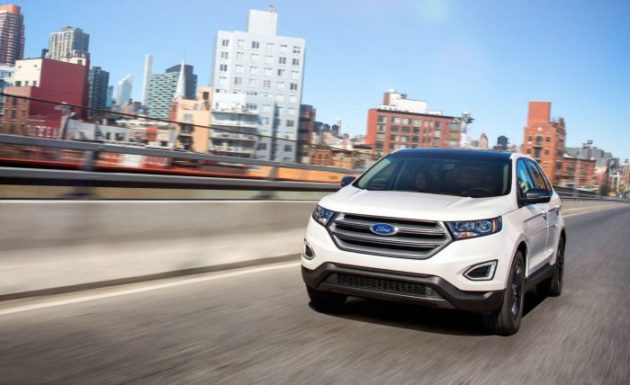 The test mule of new Edge crossover was massively camouflaged, so it seems that there is a long way to go until complete product. Despite this, sources, such as motor1.com claim that this vehicle could debut later this year. They even go as far to say that 209 Edge will be shown at upcoming LA Motor Show. The date seems too close, and this info far fetched so because of that we will go with other option. The second date could be set in early 2018 which coincides with 2018 NAIAS. Considering that Ford originates from the city of Detroit where this auto show is held it makes sense. Anyway, regardless of the location of presentation new Edge will be presented in the following months.

The price is not known at the moment. The changes will start from the inside of the cabin to the exterior, and all to the under of the hood. This kind of refresh will merit an increase in price. Also, there is a possibility of Edge Vignale option to be sold in the US which will have separate pricing. So, the price remains to be seen, but for your comparison, we will list the price of the current models. The 2017 Edge starts at $29,000 for base SE trim. The high-end Platinum version starts at $37,000.

Even though the 2019 Ford Edge hasn’t been revealed, the car has been spied testing which is quite interesting to see. The model was fully camouflaged with plastic inserts added in the front and at the back. This likely suggests that its front and rear end will receive quite a bit more attention than the car’s profile. This is usually the case with most facelifts so nothing wrong there. In the front it looks like the headlights are slightly swept back as well as slimmer than before. The front grille also looks to be much taller than before spanning from the hood and all the way down to the lower grille which is now considerably slimmer than that of the ongoing model. This would definitely create a much more aggressive design which is likely what is going for at this point. 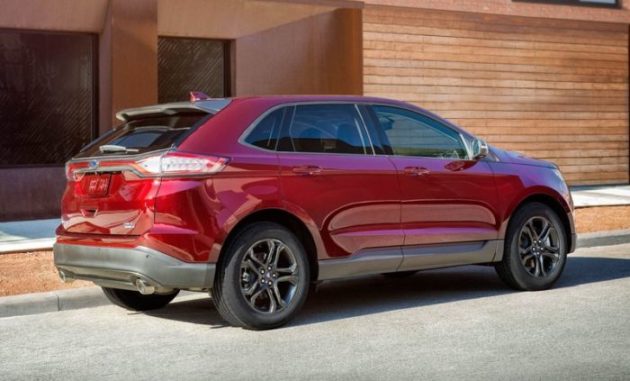 The interior – Inside the Cabin

Here the 2019 Ford Edge might receive an entire redesign. Even though this seems unlikely, let’s not forget Ford already did it with the smaller EcoSport. This could mean the car is going to share its dashboard with the new Fusion in which case it should become a much better deal than before. The current model has a rather bland interior which is not great even on the top end models. This new one should receive a more minimalist design with far less buttons than before. The aging design with the wide center stack will be gone.

Instead, the car may receive something more similar to what Ford used on the latest Fiesta or the upcoming Focus. We can expect a more modern center stack with an LCD screen mounted on top of the dashboard. Under it the car should boast the usual AC vents as well as the climate controls. The materials should be far improved too while the fit and finish will likely get better as times go by. 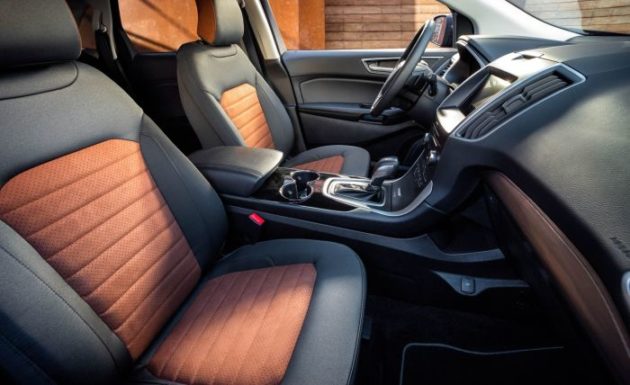 Under the hood – The Engine Bay

The 2019 Ford Edge is likely going to stick with a 2.0 liter turbo-four as its base engine. This should still offer around 245 horsepower and 275 lb-ft of torque. The option 3.5 liter naturally aspirated V6 on the other hand is expected to be discontinued. In its place Ford may install their brand new 3.3 liter unit which should still offer 280 horsepower and 250 lb-ft of torque while delivering better fuel efficiency. The range-topping model will still get the same 2.7 liter twin-turbo V6. With as much as 315 horsepower and 350 lb-ft of torque this should be more than enough for those looking for thrills. All engines are expected to ditch the aging 6 speed automatic in favor of a far better 9 speed gearbox.

01/23/2017 UPDATE: Once again automobile history has been written. Ford will for the first time in its history offer diesel …