The automakers often cover their cars in heavy and dark camouflage, but Blue Oval decided to do something different. 2019 Ford Focus was recently spied and was wearing very bright and colorful camo. The pre-production prototype of 2019 Focus looked more like a piece of art than a test mule. Putting aside multicolored cover, this set of pictures gave us the clearest look at this vehicle so far.

Upfront we have noticed a set of accent LED lights on the lower fascia. The grill looks like the one on the ongoing model. It’s just that with 2019 MY it has grown in size. It is also positioned lower on the fascia so that headlights would have more space but less separation between them. All in all, it seems that entire car now has larger dimension compared to the current Focus. 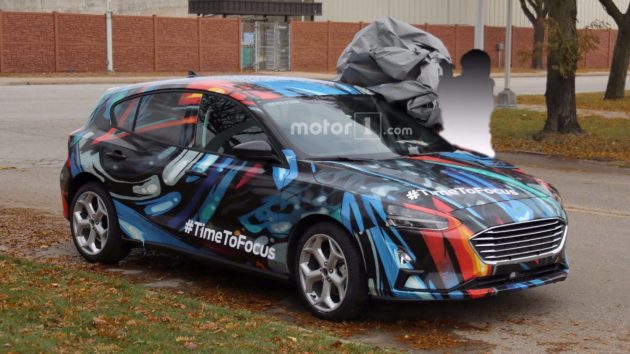 The increase in size should offer more space on the inside. This move was necessary in order for 2019 Focus to stay hand to hand with the models such as Volkswagen Golf and Honda Civic. The size just won’t do it regarding staying competitive. Blue Oval will also need to up both technology and quality of material being used. The interior was the most criticized part of the previous generations of Ford Focus.

As far as the manufacturing of 2019 Ford Focus goes, it will be assembled in China. The models made in Asia will later be shipped in worldwide dealerships. Yes, the same model will be available in Europe, Asia, and in the United States. The units that will power the new Focus haven’t been disclosed yet. What we expect in all markets is a 1.5-liter three-cylinder as the main powertrain, while stronger mills will also be in the mix depending on the market. The transmission will come in both manual and dual-clutch automatic versions.

06/21/2017 UPDATE: 2019 Ford Focus is, well in the ‘focus,’ once again. This time the interior of the upcoming hatch is spied for the first time. The winter tests are behind us, and now we have hot weather testings with interior layout entirely set. The details of the cabin can be seen, and here it seems that Focus took a page from Fiesta playbook.

The spy photographer didn’t let side camo on the door to distract him from the goal. The focal point of photos is the interior. Having Fiesta as its role model 2019 Focus now has a similar arrangement with a large display positioned on top of the dash. The screens in Ford vehicles are getting bigger with every model. This size in Focus suggests that SYNC system is present.

Also Read:  2018 Ford F-150 Will Feature Diesel Engine for the First Time Ever

Moving away from the display, you can see that 2019 Focus has a digital dashboard. The infotainment is getting plenty of changes, but the size will be similar to competing models. The size of the screen will most likely be 12.3-inches just like in the Peugeot and Volkswagen models. 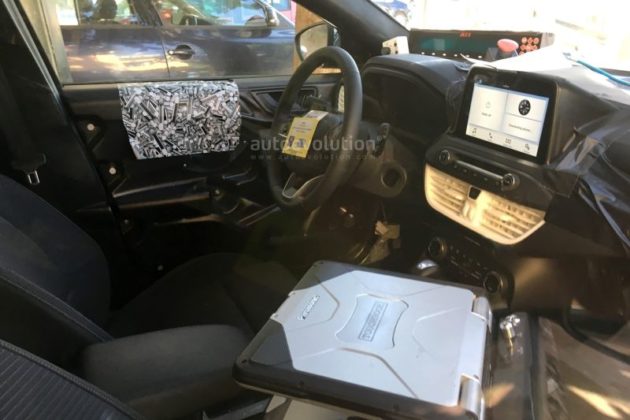 2019 Ford Focus will ride on a highly-flexible global platform. Most of Ford’s cars in a C-segment ride on the same underpinnings. These models include Kuga/Escape crossover. The car will arrive in 2019, but before that, it will be shown during the next year. With this platform, the general size of the hatchback won’t change, but its wheelbase will be longer. Thanks to this the legroom will be improved together with cargo space. With the growing popularity of SUVs, people from Ford will have to do the best job possible with this model.

The engine lineup will be built around 1.0 and 1.5-liter units. For the European market 1.5-liter, TDCi diesel mill will be available. The transmission spotted on the prototype is apparently automatic, but we don’t know which one. Current models use Getrag twin-clutch, but there is a possibility of nine and ten-speed gearboxes in the future.

03/30/2017 UPDATE: 2019 Ford Focus is rapidly preparing for a next year launch. The work on fourth-generation of this model started some time ago, and people from Ford are starting to wrap things up. The crucial evidence to this is the set of new spy photos that we have for you. The pictures bellow show you an almost production ready model, under some light camouflage. The latest set of testing is being conducted in Arctic conditions which are a clear sign that the only work left in the car are some minor details. The tests under extreme conditions serve to finish up the job on car electronics, stability, braking, etc.

The 2019 Focus is going to be presented in first months of 2018, before official launch which will also happen before the end of following year. The new Focus undergone changes that are best described as evolutionary. The Same path that is Focus now walking is the one the Fiesta recently crossed. The new model will be built on Ford’s highly flexible C-class platform. The changes are going to be subtle, because Blue Oval company doesn’t have enough funds to finance cars in this segment. As is the case with many other manufacturers, the Detroit-based company is betting on crossovers rather than on sedans and hatchbacks. 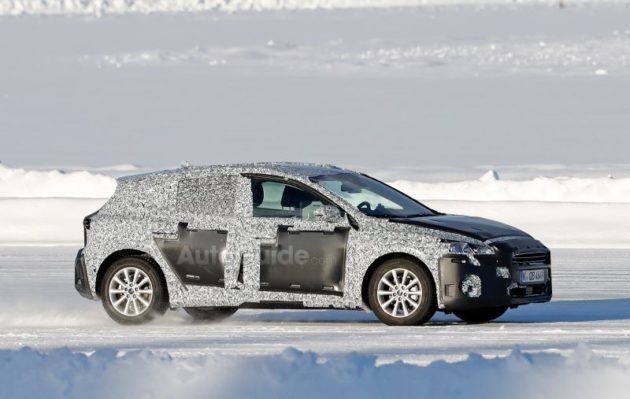 The main improvements on 2019 Focus come in a shape of longer wheelbase which will allow more space on the inside. General size and length won’t grow all that much or even at all. The weight is going to drop thanks to the new platform. Also, people from Michigan are working on improving car’s aerodynamics. These improvements will most likely prompt the vehicle to be more fuel efficient, but that wasn’t confirmed by Ford.

There is also an option of hybrid Focus, or even an all-electric one but this is currently on a level of rumors. On the inside, there are going to be changes which are mostly unknowns so far. It is definitely going to be more refined, and modern and packed with Ford’s latest technology solutions. Spy photos of the interior that we have at our disposal don’t reveal much, so we will just have to bid our time and wait for more information.

09/23/2016 REVIEW: The ongoing Focus has been around for roughly six years now and it went through one major facelift in its lifetime. In order to stay competitive, the car will receive a major update with the 2019 Ford Focus which is expected to debut in the early 2018 as 2019 MY. Even though Ford hasn’t revealed its intentions up until now, numerous test mules of the new Focus have been spied ever since the start of the year. Until the new model will be released though, the current one will have to be discontinued and it seems it will do so with a bang. This will be the 2018 Focus RS500 which is expected to come in a very limited run, both in the US and in Europe. 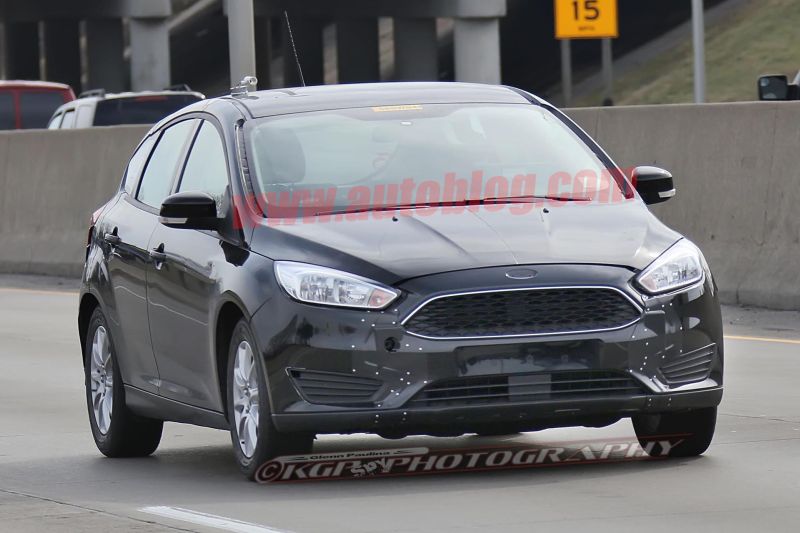 The new car and the old RS?

Both the new Focus and the RS500 should be out roughly at the same time, with the RS being expected a few weeks prior to the release of the new model. This will mark the end of this generation and it is expected to be sold before the official release, similar to what they did with the Ford GT. Not much is known about it but people expect around 500 units for the US market and 500 for Europe. Its price should be just north of $40,000 which would make it around $5,000 more than the regular RS. The new Focus on the other hand won’t cost that much more over the current model. Instead, it will offer more space and likely better features while costing the same which would be a great tradeoff. 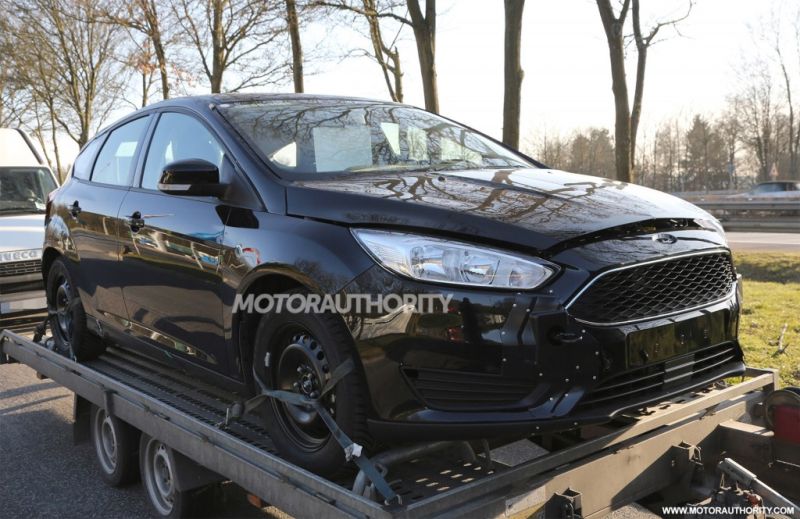 The platform of new 2019 Ford Focus

The new 2018 Ford Focus is going to be based on a new chassis and this has been made clear from the test mules. These were noticeably longer than the current car and also featured a longer wheelbase. Even though it doesn’t seem like it, the new car should also be slightly wider as well as lower. The larger footprint but the shorter height should allow for more space inside the cabin as well as a better driving position. 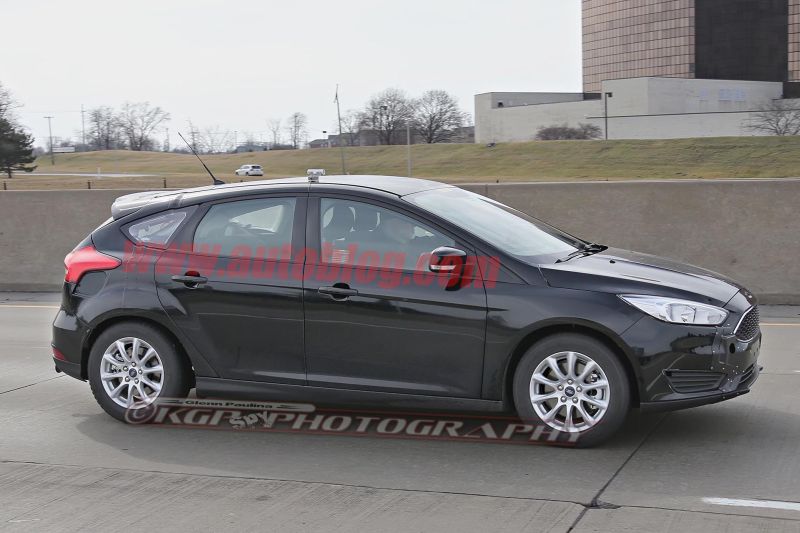 There is no word about the design but some rumors suggest at an evolution of the current design language which has been around for quite some time. With the new Focus, an ST version should also be launched with slightly better performance than before. The interior of the new car will definitely get rid of the rather unusual shaped dashboard. Instead, it seems that the new Focus will receive something a lot closer in terms of feel and design with the Fusion. This will definitely elevate the experience inside the cabin while not adding much to the overall cost of the car. 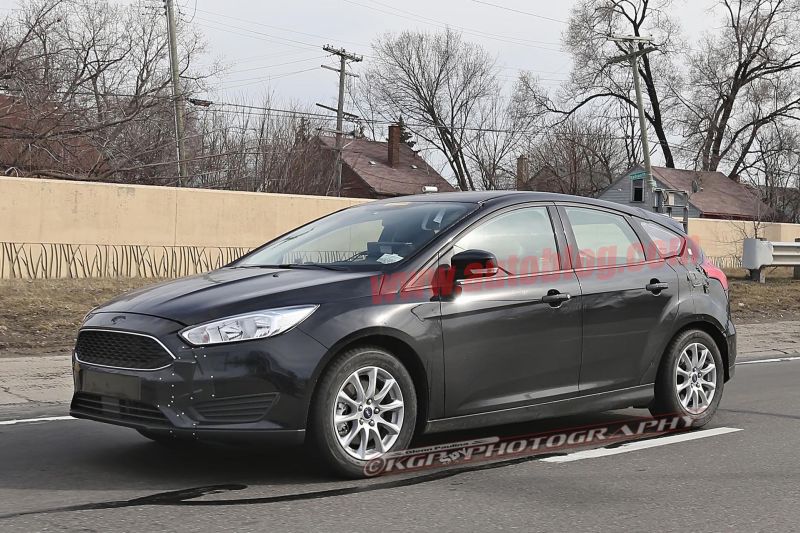 While the European market received the 1 liter engine a lot sooner, the US market was stuck with the older 2 liter inline 4. It seems that the 2019 Ford Focus will ditch all the naturally aspirated engines in the favor of the EcoBoost powertrains. This means that even the base model on the US market will receive an EcoBoost. The most likely contender here is a 1 liter 3 cylinder offering around 140 horsepower and little over 130 lb-ft of torque. This will replace both previous engines and should make for a good compromise between performance and fuel consumption.

Also Read:  How to Put a Roof Rack on Soft Top Bronco

In Europe a 1.5 liter engine with anything between 150 and 200 horsepower should also be available. The rumored ST Focus on the other hand would get to use a heavily updated 2 liter EcoBoost capable to offer close to 280 horsepower. There is still no word on a new RS but considering the current one came more than five years after the release of the regular Focus, a new one could come around 2023. 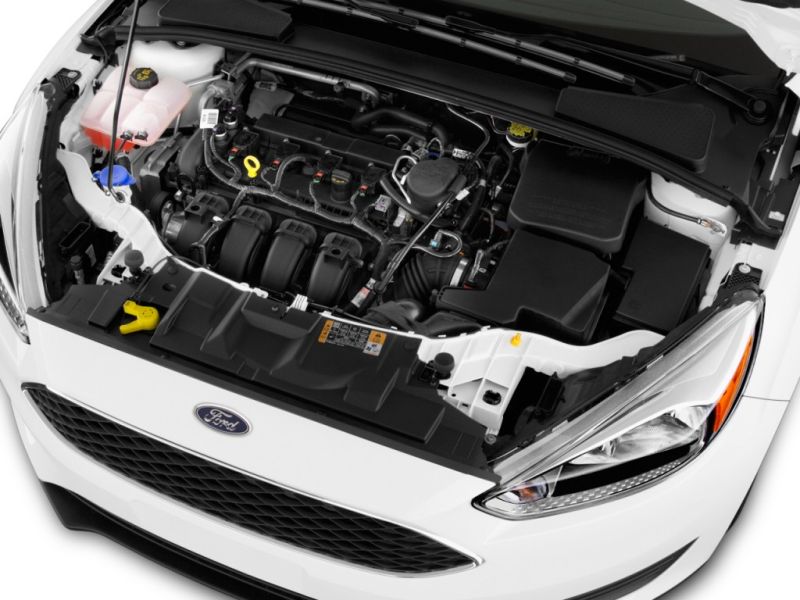 It is too early to talk about the release date at this point in time. Despite test mules being spotted all around the place, the production model is nowhere near its completion phase. What would be safe to assume is that car will be presented publicly at the end of 2017 at one of the American auto shows. After that, the car would enter final phases of production and it would be available for purchase during the first months of 2018. Model year for the new Ford Focus would be 2019.