02/20/2017 UPDATE: 2018 Toyota Sequoia debuted at 2017 Chicago Motor Show a couple of days ago bringing to the world a mid-cycle refresh of Toyota’s largest SUV. The update will span across entire Sequoia lineup, and first among equals that was presented in Chicago was TRD Sport model. This model stands out with its custom-tuned Bilstein shocks and entirely new front and rear anti-sway bars. These two things combined make Sequoia have better handling and improved behavior while entering corners. Both things mentioned were criticized on previous installments.

Regardless of the color of your choice new Toyota Sequoia 2018 comes with changed front grille, more aggressive front fascia, 20-inch black alloy wheels, pitch-black mirror caps, darkened taillights and TRD badges across the vehicle. Colors at your disposal are Super White, Magnetic Gray or a new Midnight Black. On the inside, the latest installment of Toyota’s largest SUV continues on using black shades. The entire interior is clothed in black; seats have TRD badges stitched onto them, floor mats are also branded with TRD letters and doors feature sill protectors. Despite not being a premium trim, it will have leather offered as a material of your choice for the insides. From additional equipment, TRD Sequoia will provide reclining/fold-flat third-row seating, Entune Premium Audio with Integrated Navigation, and power front seats. 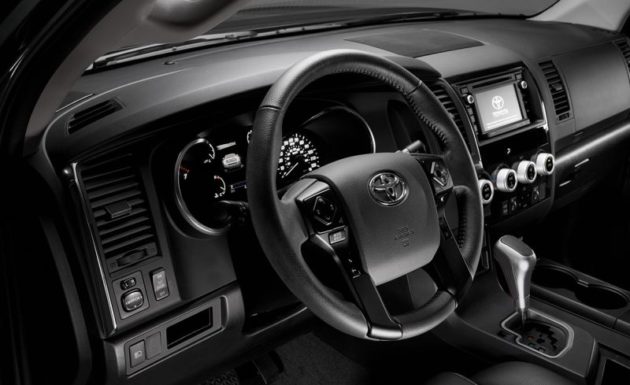 The entire range of new Sequoias is going to have new LED headlights as standard, DRls fog lamps and a variety of colors for interior and exterior to choose. Continuing with the interior most of it will be completely overhauled. The console and instrument cluster will be new and will feature Multi-information display. From the latest tech and safety systems, all and every trim of 2018 Sequoia is going to have Toyota Star Safety System with the more advanced Toyota Safety System (TSS-P) and a range of latest technologies that include Lane Departure Alert, Pedestrian Detection, Auto High Beams and Dynamic Radar Cruise Control.

Moving onto the powertrain new Sequoia ironically won’t offer anything new. All trims will come with the currently available 5.7-liter i-Force V8 mated to a six-speed automatic transmission.

Currently, there is no official pricing information about new Sequoia, but more will be known when the model comes close to its sales date. 2018 Toyota Sequoia will be available in dealerships in September.

The new 2018 Toyota Sequoia will be a real monster. It is a rare sight to see a car of that size being able to compete with much smaller and lighter cars in terms of performance and acceleration. The new Sequoia will feature powerful engine that will give you an enjoyable ride. The new model will also come in six trim levels, namely the SR5, SR5FFV, Limited, Limited FFV, Platinum and the Platinum FFV. Each add a little more features over the lower trim level and increases the cost at the same time. The vehicle is robust, well built and offers plenty of room on the inside. The Toyota has always maintained one of the top positions in this segment and with the new Sequoia, we don’t expect things to change. 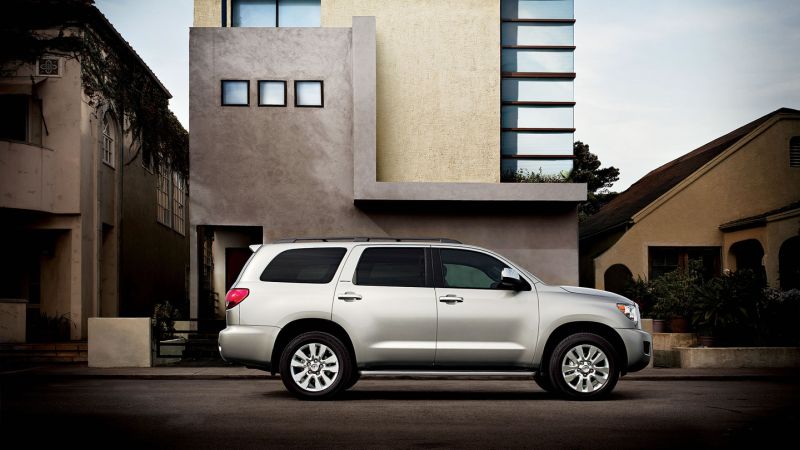 We are pleased to see the new Sequoia gets a new engine, over the previous generation. The old 4.6-liter V8, capable of outputting not so impressive 310 horsepower and a peak torque of 327 pounds-feet will be replaced by a new monstrous iForce 5.7-liter V8 engine, capable of delivering around 400 horsepower, at 5,600 rpm, with a maximum torque output of 401 pounds-feet, at 3,600 rpm. The engine will feature the dual-independent VVT-I, variable valve timing with intelligence technology, that is able to optimize performance and fuel economy at the same time. It does this by varying the timing of the intake valves, by adjusting the relationship between the camshaft drive, the intake camshaft and exhaust camshaft.

The engine will be paired to a 6-speed automatic transmission system that is a little worse choice when it comes to the fuel consumption, but allows for much better gear shifting and overall driving experience. As far as the performance is concerned, the new Sequoia will be able to accelerate like mad, especially for a car of that size. It will be able to reach 60 mph from standing in just 6.7 seconds, which is an amazing result. The top speed is set at 114 mph. The EPA estimated fuel consumption will be 13 mpg in the city and 17 mpg on the highway. Considering the curb weight of almost 5800 pounds and a fuel hungry engine, it is a fairly decent fuel consumption. 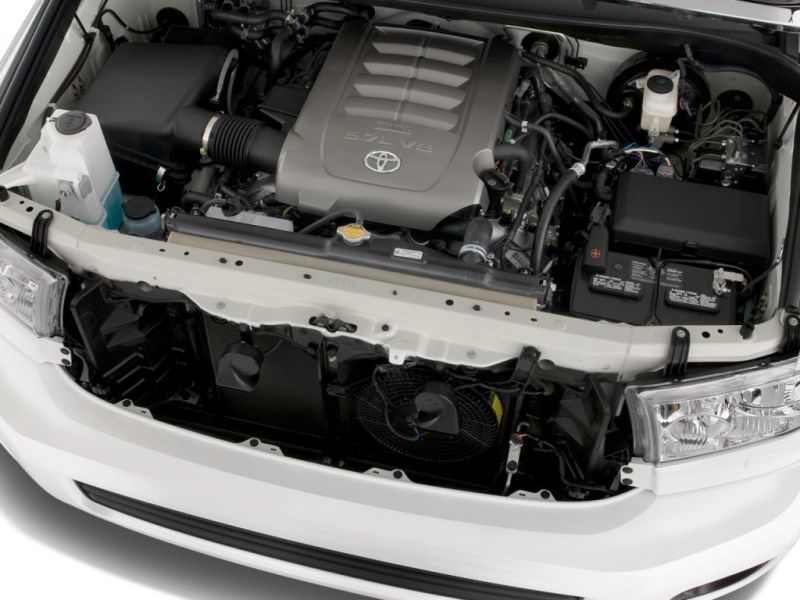 The new Sequoia will feature a new refreshed look over the previous model. At the front, a new revamped grille will be larger and more elegant than before. Same goes with the headlights. The old small, simple rectangular headlights are replaced by sharp, long, wing-like LED lights, that fit the overall design nicely. The front bumper also underwent an overhaul, with longer air intake opening at the bottom. Fog lights remained intact in terms of design, featuring simple circular shape. At the back, new headlights look great and perfectly fit the rest of the design. The car will come with 18 x 8 alloy wheels, all-season and all-terrain tires, roof rack and power glass sunroof. 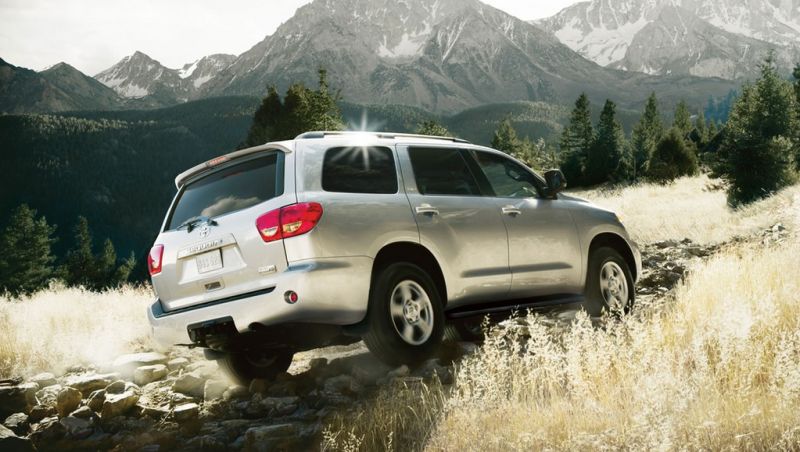 The new Sequoia won’t lack space on the inside, that’s for sure. Spacious cabin and comfortable seats can accommodate up to 8 passengers and offer plenty of head and leg room. Features-wise, the new 2018 Toyota Sequoia will come standard with 60/40-split foldable third row seats and 40/20/40-split foldable second row bench. In addition to this there will also be cruise control, tri-zone automatic climate control and telescopic/tilt-adjustable steering wheel. From standard Toyota equipment it will have: Bluetooth and USB connectivity, rearview camera, Toyota’s Entune Audio System, Siri Eyes free. On the dashboard there will be a 6.1-inch touchscreen with infotainment system, satellite and HD radio and much more. Each trim level adds a bit to the standard equipment. 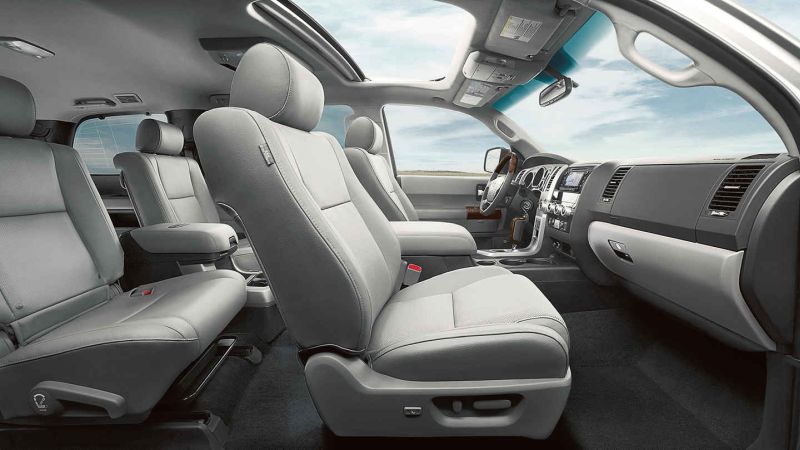 Not much has been said about release date of the New Sequoia. According to available information, the debut of the new Sequoia is scheduled for the second quarter of 2017. As far as the prices are concerned, it is expected to start at around $45,000 for the base model, ranging all the way to $60,000, for the most expensive trims.