BMW’s Z cars have been released with the Z3, a small roadster based on the 3 Series. The trend continued with the Z4 and it now seems that its successor is going to be called the Z5. Like before, the car is expected to share most of its chassis and running gear with the 3 and 4 Series. However, this time around it will also have a sibling based on the same chassis, running gear and engines. This one will be the Toyota Supra, one of the most awaited cars of the decade. However, the 2018 BMW Z5 is at least as impressive as the Supra. For starters, it is expected to get more powerful engines and unlike its sibling, it will remain a convertible. This has been one of the main selling points of the car and things will not change for the new one either.

So far it seems that the car’s new platform will be considerably lighter than that of the 3 Series, despite the many similarities between them. For starters, BMW is expected to use aluminum, magnesium and carbon fiber in its construction. With their help they should be able to keep the weight down to less than 3,000 pounds which would be a more than 300 pounds difference when compared to the current car. Even though the car will be a convertible, it will be considerably more rigid than before due to the addition of carbon fiber and magnesium. A fully independent suspension will be used on all four corners and at this point it seems that inboard suspension might be used for the rear end. This would be needed in order to keep the height as low as possible but it has not been confirmed up to this point. The price will remain close to the current car. This means the base model will start around $50,000 while the top end versions might go past $70,000 this time around. 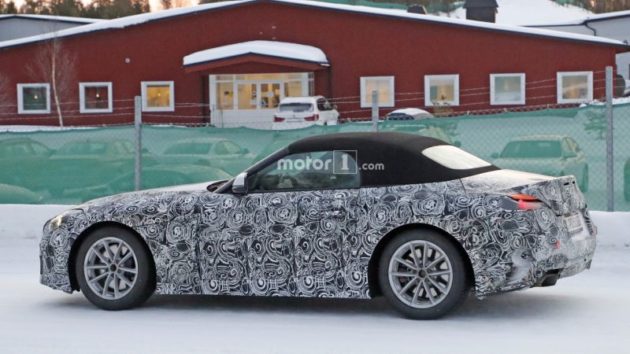 The 2018 BMW Z5 is still well under wraps but spy shots of some development mules have been seen testing a few times. Last spy photos surfaced just a few days ago and gave us new look at the upcoming Z5 roadster. From these we can see that the new car is keeping the long hood and pushed back cabin. However, it also seems to have a longer wheelbase and it seems to be slightly longer than before too. The width seems to be similar but things may change on the actual production model. The design, while hidden quite well with camouflage, seems to be something new. For starters, BMW’s usual kidney grille is now moved down and the bumper seems to boast much larger intakes than before. The hood also seems to end in a much lower nose which could suggest a super-car like appearance. A soft-top has been used on the prototypes and we should see it in the production car as well.

Even though the car is not out yet, it is safe to assume that the 2018 BMW Z5 is going to feature your usual BMW interior. This means that the climate controls, the infotainment system, steering wheel and the HVAC grilles should all be carried over from the 3 or 5 Series. The seats on the other hand might be the same as those found in the i8 super-car only with a different upholstery on them. We do not expect anything too special here but just the regular $50,000 BMW.

The previous car had a mix of 4 and 6 cylinder engines which provided anything between 200 and all the way up to 335 horsepower. The new car will be similar, but not entirely. For starters, the base engine might become a new 2 liter twin-turbo inline 4 with as much as 300 horsepower and well over 300 lb-ft of torque. A six cylinder 3 liter unit is also a big possibility. This could be BMW’s M Division 3 liter twin-turbo unit from the M3 which is capable of over 400 horsepower and 400 lb-ft of torque. Like before, rear wheel drive will be standard and this time around an all wheel drive system might be offered as an option. A six speed manual will likely still be available on certain models which will make it a rather rare breed. A faster seven speed dual-clutch unit will more than likely be offered as an option.

Now that BMW updated most of their cars it looks like the 3-Series is the next one in line. So …