06/20/2017 UPDATE: BMW started a long process of reinventing itself as a company. The Munich giant who made a name for itself by making rear-wheel-drive vehicles is now trying to show that it’s good enough in making FWD models. 2018 BMW X2 is one of the first cars that will retain BMW’s sports side and performance identity while being driven by front wheels.

The first signs than new X2 is going to be an aggressive sport-oriented vehicle was seen at 2016 Paris Motor Show. This claim now looks like it’s true because test mules of this compact crossover are spending most of their time on Nurburgring track. The production version will lose some of its ‘mean sides’ compared to the concept, but it will retain appealing design.

Earlier reports suggested that 2018 X2 is going to be similar to its smaller sibling the X1. This claim is true in some part, but now we can say that new X2 is going to be more compact with an identity of its own. 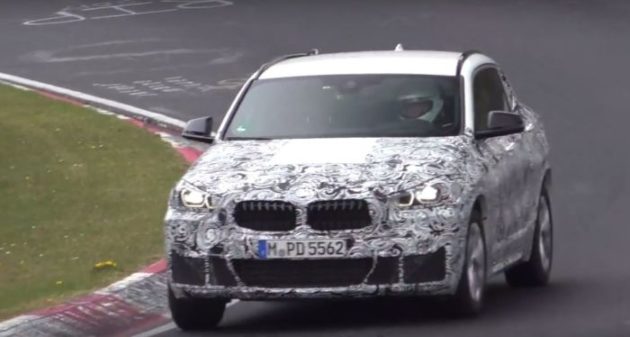 Most of BMW’s ‘mini’ models have UKL platform as its underpinning, and the case is the same with the X2. The FWD mentioned above will be a standard drive, while all-four-drive (xDrive) will come as an option.

From the sound of the vehicle, we can also say that it will be one hell of a driving machine. This statement especially goes when you compare it with competitors such is Jaguar E-Pace. The British model underwent tests at Nurburgring, and it sounded plain in the shadow of the German crossover.

For the American market 2018 BMW X2 will come with the same engine setup as the X1. This structure includes sDrive28i (FWD) and xDrive28i (AWD). The available transmissions are six-speed manual and Toyota-made eight-speed automatic. The Europe gets more in shape of 18i, 20i, and 25i. Also, for diesel lovers there will be output offered in a region between 150 and 231 horsepower.

Like we already stated in the article bellow, new X2 will debut at 2017 Frankfurt Motor Show.

06/15/2017 UPDATE: Here we have another spotting of the upcoming 2018 BMW X2. Once again the vehicle was seen in its prototype form, but this time it wasn’t in motion. Rather than that, we have caught the crossovers lying motionless packed onto the transportation trucks. Also, some parts of the 2018 X2 are more visible than before, especially parts of the front end.

The first glimpses of new X2 we saw at 2016 Paris Motor Show where concept version of this crossover was shown. Now, after seeing the test mules of X2, we can say that the two will share a lot of components. Like we said the things have gotten clearer. The front part of the chassis is almost entirely naked, and the aggressive grille and bumper are dominating the front end of 2018 BMW X2. This was the standout part of the concept, so we are glad that it was transferred to the production vehicle.

The hood is also sharp angled towards the kidney grille, and the headlights will add to its mean look despite the fact that they are still covered in camo. These new pictures only add to our first impression. We are of the opinion that new BMW X2 is going to be one of the most desirable cars in compact SUV segment. 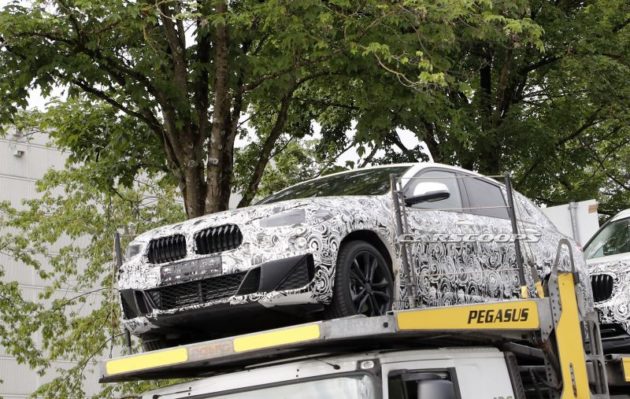 Under the entirely new chassis and new platform upcoming BMW X2 will stay similar in style to its younger sibling, the X1. This notion refers to the standard front-wheel drive and optional all-wheel drive designated for installments with more power under the hood.

As per sources, 2018 BMW X2 will be offered in three different versions to the US market. First one is the base option, and that is sDrive28i; the second in line is xDrive28i, and the last one and the one that tops the range is xDrive35i. In the Europe, there will be a plethora of engines ranging from petrol ones to the inevitable diesel powertrains. Also, you should stay open to the plug-in hybrid version of X2.

The presentation of this model will occur at 2017 Frankfurt Motor Show.

05/16/2017 Review: Not that long ago BMW announced that they plan on releasing 40 new models in the next 2 years. One of these is going to be the all new 2018 BMW X2, a sportier version of their highly successful X1. So far BMW didn’t release much information about it but they did release a concept. The X2 concept was very impressive to look at but it didn’t conform to the standard sports crossover look set by the X6 but more on that later. The X2 is set to slot in right between the X1 and X3 in terms of price. However, its interior will more than likely be nearly identical to that of its cheaper sibling.

The car is going to be based on BMW’s UKL platform which is a departure from the norm. How? Well, this platform is actually front wheel drive which is unusual for BMW and for one of their sports models. However, the X2 will more than likely come with quite a few improvements over its sibling. While it will share its chassis with the X1, it seems the car will receive a bespoke running gear. Expect it to get new shocks and stiffer springs as well as possibly better brakes. These should improve the way the X2 handles in order to match its looks. 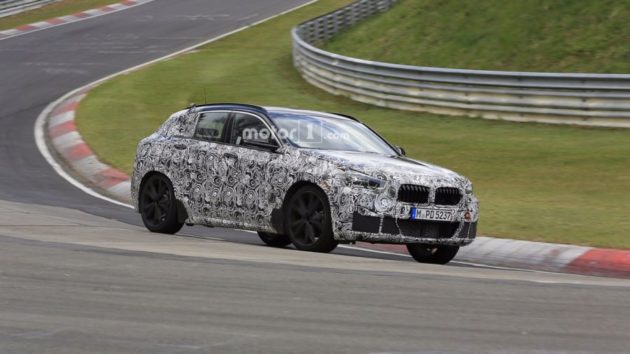 Not that long ago a camouflaged test mule of the 2018 BMW X2 has been seen testing on the Nurburgring. This was just a couple of months after the release of the concept which suggests that BMW pretty much finished the development of the car. Even though details are still scarce, it seems the X2 will be quite close to its concept which is highly unusual. On top of that, the model seen testing was wearing massive rims and it was quite low to the ground but more on that later.

The X2 which was spied at Nurburgring looked like it’s close to a production version. This means that the date of release is not too far away. Despite our saying in the previous part of the article there’s no exact date set for the deliverance of 2018 BMW X2. If we have to guess it right now, it will probably be presented during the Frankfurt Auto Show. If BMW fails to deliver an all-new X2 till autumn don’t worry we will see the final product before the year ends. And, if you are more interested in buying, rather than seeing, this vehicle will go on sale in early 2018.

Price wise there is also no official pricing set for the X2 crossover. Nonetheless, from the signals that are coming from the German automaker, we can put up an orientation price. According to various sources, the entry model of 2018 X2 will start a little above the premium edition of BMW X1. To spare you of Google search for ‘BMW X1 Price’ we will tell you. 2018 BMW X2 price will start at $38,000 and with additional equipment and features it can only go up. How much? We don’t know that yet, but more information will become available as the car approaches the official presentation. Stay tuned as we bring you more details.

The 2018 BMW X2 is more than likely going to receive most of its engine lineup from the X1 and the 1 Series. This means the base model, at least in the US, will receive a 2.0 liter turbocharged inline 4 gas powertrain offering around 228 horsepower and 258 lb-ft of torque. In Europe on the other hand the car could also be offered with the same 2.0 liter engine but with 189 horsepower as well as with a 1.5 liter inline 3 offering around 134 horsepower. The US version of the car is likely going to come equipped with an 8 speed automatic.

The base 1.5 liter European model could also come with a 6 speed manual and front wheel drive in order to keep costs down. At this point an X2 M is also a real possibility. Considering the camouflaged prototype we can safely assume BMW is readying a high performance version of the car. This could boast a 2.0 liter turbo-four with north of 300 horsepower which would definitely allow it to become one of the fastest sports crossovers around. 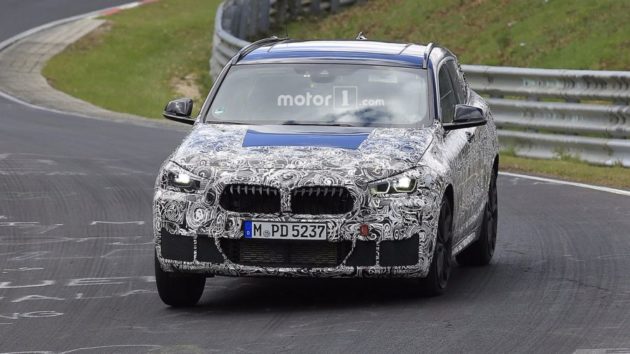 As we said, the 2018 BMW X2 is mostly based on the X1. Fortunately this doesn’t meant the 2 cars will share that many design cues. Taking into consideration the camouflaged test mule, it seems that the only similarity between the two is the kidney grille. Everything else is all new and that’s great. In fact the car seen a while ago looks to be identical to its concept. It boasts swept-back headlights, a coupe-like roof line as well as a subtle curvature to its rear end. The wheels seem to boast large 18 or 19 inch rims which likely suggest its high performance version. The windows are also much smaller than on the X1 so the car is definitely lower than its sibling.

If the rumors are true the 2018 X2 will share most of the cabin with the X1. This isn’t necessarily a bad thing considering how good the little crossover is. While the minimalist dashboard, great materials and above the average equipment level will be carried over, the seats as well as the seating layout won’t. Some suggested the car could come with 4 individual bucket seats with a long center console offering all 4 passengers storage spaces, HVAC vents and an armrest. This would certainly considerably elevate the cabin of the car making it a true premium product.

BMW’s Z cars have been released with the Z3, a small roadster based on the 3 Series. The trend continued …