Home
Dodge
Dodge Challenger Demon: There is no exorcist who calms the demon

The customers, before they can acquire this car that embodies the American philosophy of ‘bigger is better’, are obliged to sign a term of responsibility for its later use. Simply put, in doing so, the brand ceases to be liable for potential hazards that result from misuse. And, looking at the technical features of this Demon Challenger, they are easy to attain.

With the world’s most powerful V8 series – a 6.2-liter Hemi V8 block – this Challenger Demon is also equipped with a larger capacity super compressor and has the redline at 6,500 rpm to charge a total of 840 hp. This model is so intense that the air conditioning system itself is used to cool compressor air and thus improve engine performance. That is – more power. This SRT Power-Chiller system is complemented by the After-Run Chiller which, in practice, helps to cool the engine by means of the cooling system (in its entirety, not just the fan) even after the engine is turned off. The combination of these two systems can help lower the intake air temperature by 7.2 ° C. 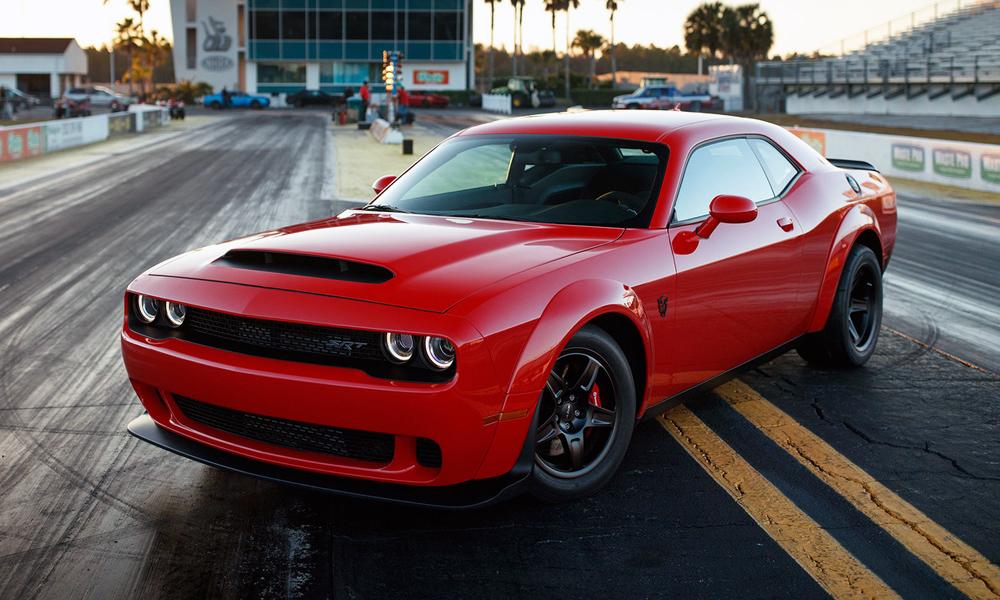 The entire engine has been reinforced to be subjected to greater efforts, including at the piston level, with even a double fuel pump. About this point, the Demon can be powered by 100 octane gasoline. As for technical numbers, in addition to the 840 hp, the Challenger Demon achieves 1,050 Nm of torque, allowing it to reach 96 km / h in just 2.3 seconds, deserving National Hot Rod Association (NHRA) certification as the fastest series production vehicle ever.

The G-forces that the start of this model offer close to the 2 G, being in the 1.8 G, even managing to lift the wheels of the front of the asphalt to the way of ‘horse’, a fact of magnitude between the models of production in series. Tires created specifically for the 315/40 R18, can be replaced by others only for the starting lanes (the famous American drag strips) with narrower tires at the front. To deal with this demonic effort, the entire transmission system was revised and strengthened. With such a beast in your possession, you need to protect it and the garage may not be enough. You can also use car covers to fully shield your vehicle, no matter where you parked it. Go to this website and learn how to obtain a cover for your Demon.

With all these features, it is not surprising that Dodge requires its customers to sign a disclaimer (revealed by the All par website) with which they are alerted to everything that the Demon can and does and does not take responsibility for. One of the items states that although the Nitto NT05R drag radial tires are approved by the United States Department of Transportation “are not intended for use on a motorway” and that such tires “are not recommended for driving in rainy conditions where there are hydroplaning conditions “.

Dodge also advises that “the customer must not move the vehicle in temperatures below 15 ° C, since Drag tires can lose flexibility and this can lead to cracks and other tire damage.” The Dodge also offers the possibility of buying the Demon without passenger seats and behind, so it is also explicit in the statement of responsibility that “if these banks have been removed, no person should travel in those places.” Customers are thus aware that accidents can result in fatalities or serious injuries to those who go there without the banks being properly installed.

You use the black key and everything goes as usual: you can lend the car to your child or leave it in the hand of the valet, almost without scares. Or, use the red key and a new reality opens. Chrysler engineers seem to have seen extra sessions of the movie “Matrix” and their notion of blue pill and red pill (in turn inspired by the works “Alice in Wonderland” and “Through the Looking Glass” by the English author Lewis Carroll) to create the most interesting technology of the new Dodge Challenger SRT Hellcat 2015. As a way to give security to the buyer, Chrysler decided to equip the sport with a pair of keys, instead of using only one (not counting, of course, reservations): the black key disables the maximum force of the car and delivery “only” 507 hp (500 hp); already the red releases the electronic central, which lets the engine work normally and deliver … 717 horsepower maximum.

This configuration of the sports coupe is announced by Chrysler as having the most powerful V8 engine ever made by Dodge, but not only.  According to the manufacturer, now controlled by Fiat, it is also the first Hemi engine with the supercharger by the compressor and also the most powerful muscle car in history.

Since the beginning of the year, an engine with more than 600 hp was expected and Chrysler made a mystery even in the global presentation of the line 2015, last week (when it also presented the unpublished Jeep Renegade, which will be made in Brazil in 2015, and also the new Cherokee, which arrives in September as the most different SUV in the Brazilian market). All in order not to spoil the exaggerated surprise. 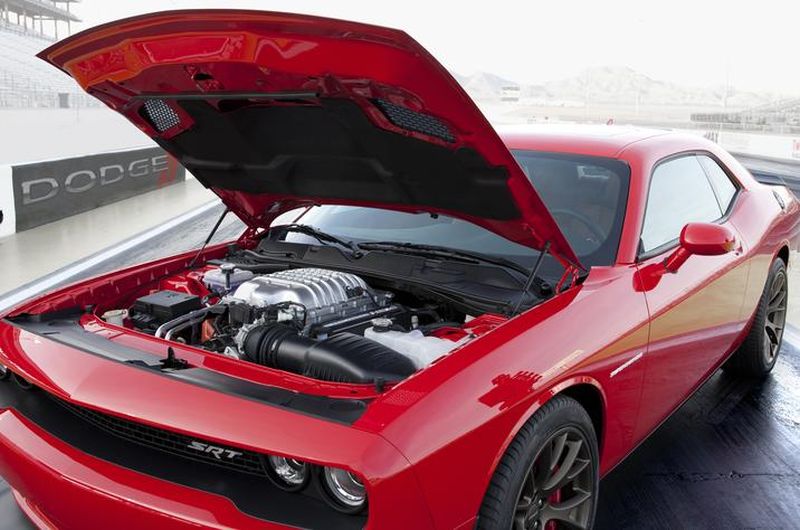 As one of the engineers of the brand explained ironically, “a car with power that certainly no one will be able to explore in life.” The powertrain consists of the 6.2-liter Hemi SRT Hellcat (which surnames the car) with a compressor, producing 717 hp and 89.8 km of torque, plus the six-speed manual gearbox (REMEC, as in Viper) or an eight-speed automatic (HP-90 Torque Flute, unpublished in the model, with possibility of sequential changes by butterflies on the steering wheel).

This technological hand from Fiat also changes how the driver can choose the many configurations of Hellcat, which can behave like a daring “ride” model, to be used by the streets; like a performance car, on tracks; or as a sporty de facto, able to withstand the track days. In total, 125 different settings of engine performance, gearbox, air suspension and differential hit can be chosen from the central console’s touch screen. Prices will only be released in the second half of the year, when the car arrives in US stores, but the Challenger line starts at $ 26,495 (about $ 58,900 cleaned in the United States) and goes to the $ 36,995 ordered by the Shaker version , the most thought-provoking and expensive today. Brazil, however, should remain closed in its small room, isolated from the fun on wheels: according to UOL Cars has learned, it is still “complicated” to homologate Dodge V8 engines based on our fuel. Fiction or reality, black or red key? Please comment in the comments box.

Dodge presents the new Challenger SRT, with more than 600 hp

The Dodge and SRT brands, now reunified within the framework of Dodge in the Chrysler Group, feature the new Dodge Challenger SRT 2015 and its spunky version with Hellcat engine, which develops over 600 hp. The SRT versions come just one month after the new Dodge Challenger 2015 is presented at the New York Motor Show with its 392 HEMI® Scat Pack Shaker engine.

The new Dodge Challenger SRT and Challenger SRT Hellcat have been restyled and fully modified in mechanical suits, aiming to provide customers with the most legitimate muscle cars on the market, packed with performance technologies inside and outside. “The new Dodge Challenger SRT Hellcat is the most radical of high performance muscle cars,” said Tim Kinesis, president and CEO of the Dodge brand. The new super cups will begin production in the last four months of 2014 at the Brampton factory in Canada.

The Challenger SRT Hellcat is powered by the new 6.2 HEMI V8 with supercharger. It is the most potent V8 in the history of the Chrysler Group; with over 600 hp (exact power and torque will be announced soon). It can be coupled to a six-speed manual or the new eight-speed automatic (Torque lite).

The new Challenger SRT features an enhanced 392 HEMI V8. Its power rose from 477 hp to 492 hp, while the maximum torque was 65 km to 65.6 km. It features the same transmission options as the more nervous version.

The entire Dodge Challenger line has received visual changes that refer to the 1971 model, with details such as the separate grille, the larger boss on the hood and the tall console in the center of the panel, which is entirely new. On the outside, still stand out the headlights with LED rings, technology also used in the new taillights.

The hood of the new Dodge Challenger SRT Hellcat includes the unmistakable central air intake, flanked by two air extractors to ensure better heat dissipation and reduced air turbulence in the engine compartment. They can be body-colored or painted black. Both versions of the Challenger SRT feature aluminum hood to reduce weight as well as external differences such as a bulky spoiler under the front bumper and higher rear airfoil. Inside, the all-new, driver-facing cockpit is designed for real high-performance coupe enthusiasts. It brings high-quality materials and a plethora of features on the console, in the 7-inch dashboard (packed with information worthy of a competition car) and in the 8.4-inch Connect central screen.

The Grand Caravan has been one of the better selling minivans in North America for more than two decades. However, …