Julien Montousse, Mazda North American design director talked about the intricate mechanism of the folding roof and he said: “There is definitely a wow factor when you see these three parts moving and coming together in the back like a Bento box.” The RF in the name of the vehicle stands for Retractable Fastback and this car looks good both with its roof raised or lowered. The new 2017 Mazda MX-5 Miata RF looks amazing indeed, but does it feel like that on the roads as well?

The MX-5 Miata RF has been tested on the curvy roads near San Diego and with the top down, you can really enjoy the sun and feel the wind in your hair and it will definitely put a smile on your face. The Miata RF is really responsive and quick, it goes into corners with confidence as well as up and down the rev range, while its shifter is easy to control as you just need to flick it with a finger or two to switch gears.

The 2017 MX-5 Miata RF gained a little weight because of the powered Retractable Fastback, but the extra weight is unnoticeable during the drive. According to Mazda, the RF automatics are 104 pounds heavier, while the versions with the manual gearbox are 113 pounds heavier than equivalent soft-top models. When you think about it, the 113-pound increase in weight is not so significant considering the addition of a complex roof, and the Miata RF remains one of the lightest production cars despite this slight jump.

There are three components to the folding roof and the main overhead part is made of aluminum with a lot of sound-deadening elements to it. The second part is a small steel piece, without which you couldn’t lower the roof back into the trunk, while the third part or parts are the rear haunches produced out of plastic and they only move out of the way so that the roof can move. You can open or close the folding top if you are moving at up to six miles per hour, but the good thing is that you don’t have to do anything manually, except holding the small switch. It takes only 13 seconds for the roof to come into position.

Mazda MX-5 Miata RF doesn’t come with a backup camera just yet, but if the roof is up, there is a heated glass rear window which provides solid visibility. There is a roof bar over the top of the two buttresses is colored in black so it is unnoticeable when you look at the car from the back when the top is down. However, going to a higher speed with the top down is not really a pleasant experience because of the loud noise. The only solution to slightly reduce the noise is to put the windows up. Even though blind-spot warning with rear cross-traffic alert is standard, you would sometimes need to turn over your shoulder and check out what is happening since the visibility is poor. 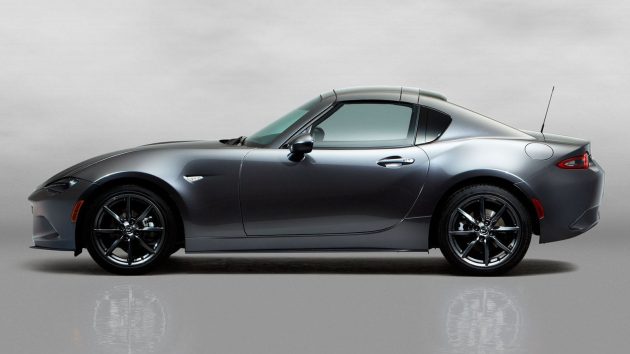 If you put the top up, the sound isolation is really astounding and road and wind noise just cannot penetrate into the cabin. The road noise is heard from the back of the car and there is an almost inaudible whistle from the door seals, but that is about it. According to the Japanese automaker, the Miata RF comes with small changes to the suspension, but these changes were undetectable during the test as this model is eager and easy to drive like any other Miata. However, when you turn, the body roll is impossible to avoid, but the car settles quickly and you will have not any problems controlling it. It is equipped with the 205/45/R17 Bridgestone Potenza S001 tires which provide a solid amount of grip.

There are some differences between the trims and for example, the Grand Touring is comfortable for everyday driving, while the Club model comes with stiffer springs and Bilstein shocks and it is firmer. Under the hood of the 2017 Mazda MX-5 Miata RF is a 2.0-liter I4 engine connected to the six-speed manual transmission and the powertrain is identical to the one on the previous model. The unit is vivacious, it revs quickly and the power it delivers is linear and predictable. You will have to shift a lot because the gearing is short, but shifting is so easy and the gearbox provides great feedback. 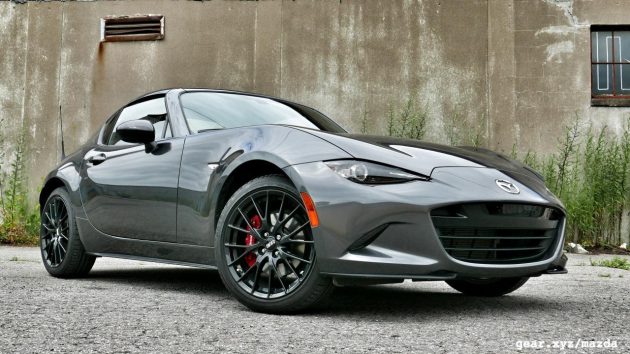 Some of the features implemented in the Miata RF are seven-inch infotainment system located at the top of the dashboard, cloth seats, a limited-slip differential and a nine-speaker Bose sound system. The Grand Touring comes with heated leather seats, navigation, automatic climate control, lane departure warning and push-button start.

The RF is available in Club and Ground Touring Trim and the Sport that is the entry-level model on the standard Miata is skipped here. The MX-5 Miata RF Club is priced at $32,390 for the one with manual transmission, while the automatic model costs $33,120. The Grand Touring is listed for $33,445 with a manual gearbox, whereas the version with an automatic one costs $34,660. For Soul Red and Machine Grey colors, you would have to add $300, while Crystal White Mica paint costs $200. There is also the Brembo brake/BBS wheel pack for Club models that costs $3,400.

The Miata has always been a favorite for everyone looking for a small, cheap and fun sports car and the …