The new 2017 Mazda 3 will come with an updated looks, but it won’t feature a major facelift overhaul, as the main reason for a semi-new model is a brand new piece of technology, the new Mazda 3 will pioneer. Although the updated version is currently announced for the Japanese market, where the model is known as Axela, we expect the rest of the world won’t wait long for the new Mazda 3 to come out. Prices and release date are yet to be confirmed, but, as always, the rumors have proven to be somewhat accurate, but, nevertheless, we should take them with a grain of salt.

Exterior and Interior of 2017 Mazda 3

As stated on the beginning, the new Mazda 3 won’t change much, when the exterior is concerned. The changes are really subtle to say the least, as the new model will include a restyled grille and slightly different headlights with LED lamps forming a slightly different pattern than before. At the rear, you would need a good eyesight to spot few minor changes on the rear bumper. 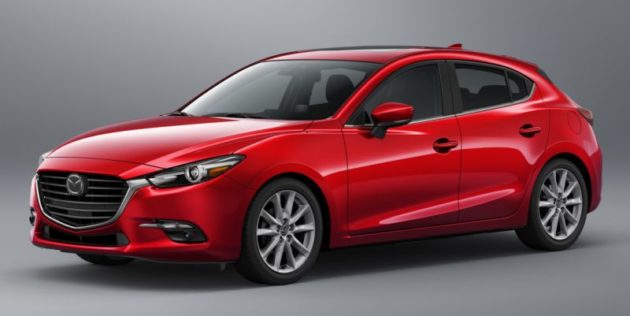 On the inside, things are little different, since the designers made an attempt to make the new Mazda 3 appeal little more premium, with the use of more quality materials on the steering wheel and on the dashboard, as well. The new Mazda 3 will be consistent with the current trim level hierarchy – the 3i and the more powerful 3s version. The standard equipment distributed over al trim levels will include a 7-inch LCD screen with infotainment system, Bluetooth connectivity for audio and phone, height-adjustable driver seat, heated side mirrors, telescopic steering wheel , 60/40-split folding rear seats, voice controls, six-speaker sound system, cruise control, 16-inch aluminum alloy wheels and more. Every higher level trim will add something extra to the basic equipment, but if you opt for the most basic version, you will not be disappointed. 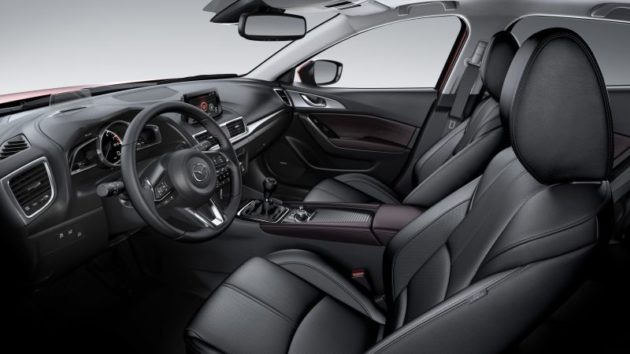 The new 2017 Mazda 3 will feature a truly remarkable piece of new technology called G-Vectoring Control and it’s been said to be the first of many new technologies developed under the Skyactiv-Vehicle Dynamics strategy. The idea is to improve all major aspects of a car, such as engine, transmission, chassis and body in order to improve overall performance and driving quality of the vehicle. The G-Vectoring Control is using the car’s engine to control the level of torque produced by the engine, based on input parameters and be able to adjust the vertical load on each axle, thus improving the traction. The manufacturer also claims the new technology will be able to reduce the steering corrections, improve handling and stability even in off-road conditions. The inertial forces are said to be of lower magnitude, as well, which may reduce the sway when turning. 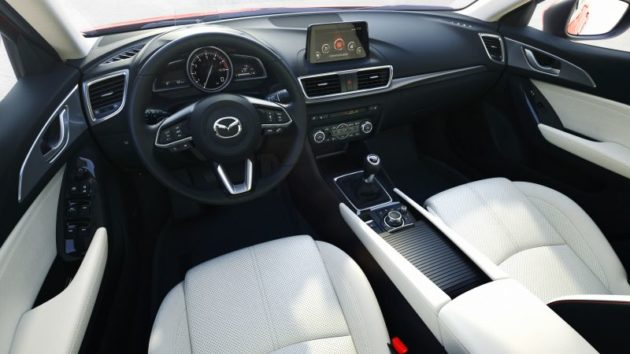 Unfortunately, no changes in the powertrain lineup will be made. The updated version of the new Mazda 3 will feature the same two engine options as before. To recall, it was the 2.0-liter 4-cylinder engine, capable of producing 155 horsepower and 150 pounds-feet of torque, which will serve as a base engine, which will propel the car from 0 to 60 in 8.3 seconds. A more powerful version will include a 2.5-liter, 4-cylinder engine, powerful enough to produce 184 horsepower, with a maximum torque output of 185 pounds-feet. Both engines will be able to be paired to either a six-speed manual or an automatic transmission system. As far as the fuel economy goes, the new Mazda 3 provides promising results on the paper – 28/39/32 mpg in the city/highway/combined. 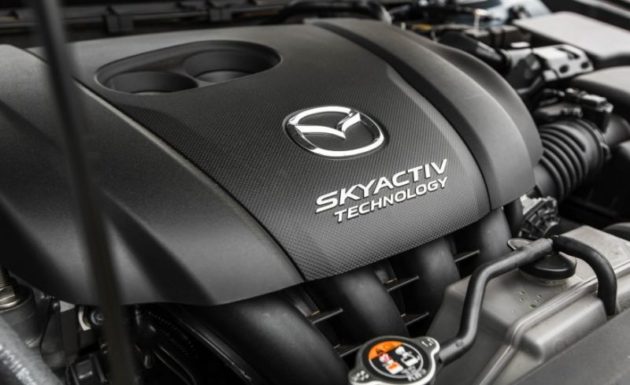 If everything goes according to plan, we should expect the first models to come out this fall. Prices wise, the starting price point for the base model is around $17,800 for the sedan, or $18,500 for the hatchback version.

Here is the video of 2016 Mazda 3 compared to it’s Honda Counterpart – The Civic: