It is quite clear that Suzuki has a rather conservative approach for the design of their cars. The ongoing Swift looks mostly identical to the car originally released in 2004. This is about to change though. A few weeks back the brand new 2018 Suzuki Swift has been seen in Japan and it seems that this model is also heading for Europe and a few other markets. The car uses a new platform, it comes with new engines and it does bring quite a bit of style to the Swift name. So far Suzuki has not said much about it which is still unusual. Despite that, the Japanese model seems to be mostly identical with what we are going to get and things look quite promising.

2018 Suzuki Swift Price and Other Details

The new model uses the same HEARTECT platform as the Baleno. This is a lightweight chassis which uses quite a bit more high strength steel than before. The end result should be a noticeably stiffer and safer car. The new chassis also allowed Suzuki to redesign the floor-pan, so the new Swift should also be roomier inside the cabin. With the new platform they also added a new running gear into the mix. So far not much information is available about this but it seems the car is considerably better to drive than before. This is also thanks to the fact the Baleno took Suzuki’s lower end market, so the Swift can be a better and more expensive car than before. The ongoing model starts at roughly €10,500 depending on the market it’s being sold in. for comparison, the new 2018 Suzuki Swift costs in Japan from the equivalent of €11,900, so it is safe to assume it will cost even more than that when it will hit the European shores. The car is expected to become available for sale in Europe from the third quarter of 2017.

Likely one of the largest steps forward for the new Swift is the way it looks. The older model looked identical to the one before it but this is no longer the case. The car kept only part of the older model’s design and that’s about it. The rear end is all new with its tailgate incorporating two small spoilers. The rear bumper features a center fog-lamp and a diffuser-like construction. The C-pillars have been separated from the roof through a black line which actually spans the entire width of the side windows.

Also Read:  What is the Best Car for Teens and First-Time Drivers in 2022?

The end result is quite impressive and these small updated make the Swift look quite fancy. The front end is all new and it features a new hexagonal grille, elongated headlights, a large black insert in the bumper which spans the width of the entire car as well as a lower overall hood. Everything adds up to a really up to date looking car which could easily become a best seller.

Here the 2018 Suzuki Swift is not as impressive as on the exterior. While they did redesign the entire cabin, some of the materials used are questionable while the design is not really all that modern. The center stack is quite simple and features a large screen, the climate controls are all the way down while the HVAC vents are similar to those in a car from the early 2000s. The steering wheel as well as the instrument cluster on the other hand make up for a really impressive look but everything else seems dated. 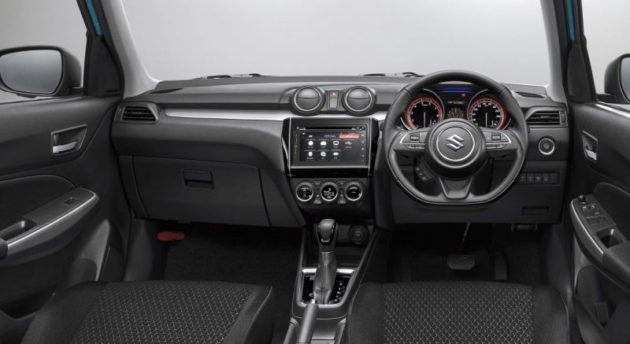 The model features in Japan three engines but in Europe it may ditch one of those and get a diesel. The base engine is a 1.2 liter petrol with 90 horsepower and 118 Nm of torque. This is pretty much on par with most of its rivals. The engine can be had with front or all wheel drive and with either a 5 speed manual or a CVT gearbox. The more powerful 1 liter turbo-three offers 100 horsepower and 150 Nm of torque. This engine can only be had with a 6 speed automatic. These two are also expected on the European 2018 Suzuki Swift. The 1.2 liter hybrid on the other hand is more than likely not going to be available. However, a Sport version of the car with a 1.4 liter turbo-four is a real possibility. This could easily provide north of 150 horsepower to the front wheels through a 6 speed manual.

Suzuki released the ongoing Jimny all the way back in 1997, so the car is two decades old at this …

The Vitara is a compact crossover originally released all the way back in ‘88. The first and second generations of …