After the i30 was restyled for the 2015 model year, Hyundai decided to wait no longer and release the brand new 2018 Hyundai i30 back at the Paris Auto Show. The car is all new so it is based on a new platform, it features new engines and it looks nothing like the one before it. This is both good and bad. While the i30 is definitely a better looking car, we somewhat feel that Hyundai lost their identity as a brand with these new models but more on that later. The new i30 is after all one of the better cars in its class. The car will hit the market in the early 2017 when Hyundai is also going to reveal the prices. So far it seems that the new model might get slightly more expensive than before. In fact, some even suggested that it will cost around $2,000 more which would be quite a bit over the original.

The rather high price tag is there because the car also has a lot more to offer. For starters, the new chassis is considerably stiffer than before and Hyundai claims much better NVH levels. There is a fully independent suspension system on board which is quite impressive for this price range. They also said that the 2018 Hyundai i30 features sport dampers and lower springs than the older model which should translate in much better handling. Also, with the help of the new suspension setup and 10% faster steering rack, the car is said to be one of the sportier models out there. We did say it will be more expensive with the base model being expected at roughly the equivalent of $19,000. This is still less than many of its rivals so Hyundai will still have an edge over them. 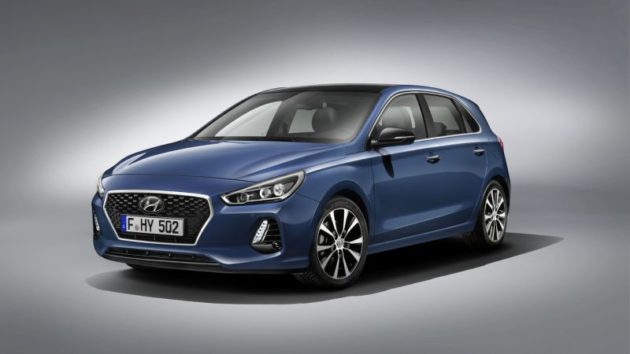 There is no denial about the fact the new i30 looks great! The car offers a nearly perfect set of proportions and the small details set it apart from the rest of Hyundai’s models. Unfortunately though, it also looks pretty much identical to any other European hatchback currently on the market. It reminds us of the Peugeot 308, the Golf and we can even see some influences from the 1 Series BMW. While this is nothing to be ashamed off, considering everyone is doing it, we would have preferred to see something unique. The front end features a similar grille and set of headlights to the Ioniq but the lines on the sides and the roof spoiler seem to be taken straight from one of its rivals. The actual package looks good though and we are sure most people are not even going to notice.

Even though we can see influences from other manufacturers, the 2018 Hyundai i30 did a much better job here. The dashboard is simple and well laid out with a clear instrument cluster, a “floating” LCD panel for the infotainment system and really nice materials for this class. Hyundai might also launch a hot-hatch version in the near future sporting new seats with larger side bolsters, a new steering wheel as well as a few other upgrades. The best part is that even the basic package is well above some of its rivals in terms of materials and equipment and that will give them a definitive edge over them.

Under the hood of new i30

The 2018 Hyundai i30 features three different petrol engines and a diesel. There is a 1.4 liter naturally aspirated unit pushing out 99 horsepower which sends the power to the front wheels via a six speed manual. A 1 liter turbocharged inline 4 with 118 horsepower and 125 lb-ft of torque is also available with the same gearbox. The top end model gets a 1.4 liter turbocharged unit with 138 horsepower and 178 lb-ft of torque mated to either a six speed manual or a seven speed dual-clutch unit. The diesel is a 1.6 liter turbocharged unit offering 94, 108 or 131 horsepower and up to 203 lb-ft of torque. The latter gets the same transmission choices as the top end petrol engine. Later down the road we may also see a more powerful version sporting a 1.6 or 2 liter unit offering in excess of 200 horsepower. However, this has not been confirmed up to this point.

It seems that 2022 Hyundai Tucson is coming our way judging by these spy photos. The prototypes spotted are wearing …

The Veloster is a four-door coupe which boasts a really unusual design that many people love. The car mostly looks …