The Veloster is a four-door coupe which boasts a really unusual design that many people love. The car mostly looks like a hatchback but it features one door on the driver’s side and two doors on the passenger’s side. The fourth door is the tailgate itself which opens to reveal the trunk. Even though most expected it not to succeed, Hyundai surprised everyone and made the car work. However, the current model is getting dated but it seems an update is on its way. Even though the car hasn’t been officially released, it has been seen testing a few times. In fact, not that long ago the 2019 Hyundai Veloster N has been seen on the Nurburgring. “N” will be Hyundai’s designation for their most powerful cars and these particular models are going to be developed by their in-house tuning company.

The new Veloster is expected to be based on a new platform and it should boast a lot of new features too. However, like before, the car will actually share most of its chassis with the small i20 hatchback which is surprising. Despite that it will come with a lot of upgrades over the i20 in order to be able to deliver better performance and a far better driving experience. From the latest spy shots it seems the car will share its wheelbase with the i20. However, it definitely looks to be both wider and lower than the hatchback. On top of that it will still come with a quirky design but more on that later. Likely the biggest change over the hatchback will be the car’s suspension setup. 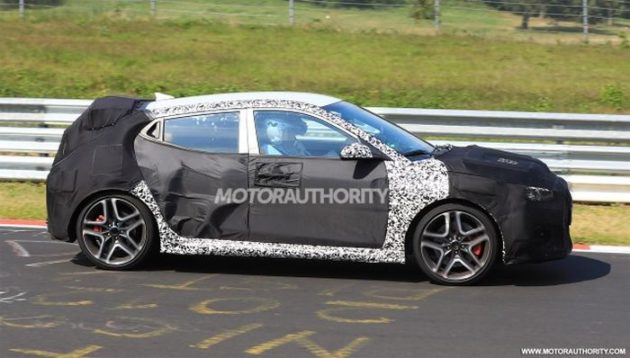 Hyundai is high on making N versions of their vehicles, but they have a plan. The first in line to exit their factory and greet the outside World is i30 N. This model is going to be presented at this year’s Frankfurt Motor Show. In accordance with this none of us shouldn’t expect the 2019 Veloster N during this year. The Korean automaker will leave the induction of this car for one of the 2018 auto shows. The sales will follow that, but at this moment it is hard to guess when exactly. Most likely they will start in the second half of the following year.

The price of 2019 Hyundai Veloster N will be dictated by two things. Its ability to perform and the market. Fiat 500 Abarth, Ford Fiesta ST, Mini Cooper S JCW, Subaru WRX, and Volkswagen GTI are just some of the competitors. With them, in mind, Hyundai’s performance hatch won’t come cheaper than $25,000. 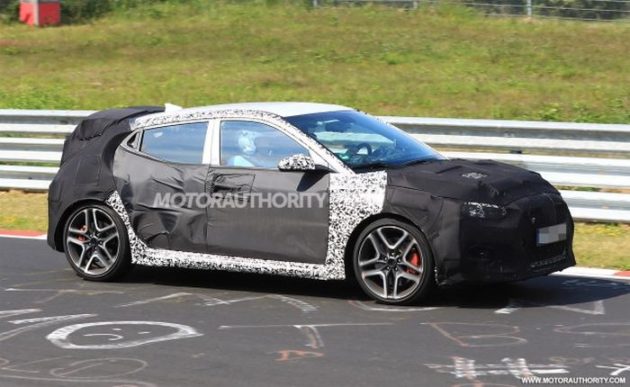 Instead of boasting a rear torsion beam, the 2019 Hyundai Veloster N is more than likely going to feature a fully independent suspension setup in the back. The front suspension might also be different in order to make room for a new engine and also allow the car to drive better than otherwise. The test mule spied on the Nurburgring also seemed to have 18 or 19 inch rims wrapped in really low profile tires. Under those rims we can clearly see some massive brakes. Those in the front seem to use one-piston floating calipers with likely 310mm, or larger, rotors. In the back the same type of setup can be seen but these seem to boast smaller 270 to 290mm rotors.

As polarizing as it may be, the design of its predecessor will be adopted by the upcoming 2019 Hyundai Veloster N. However, the car seems to be much prettier than the one before it. Firstly, in the front it looks like Hyundai will install a much larger hexagonal grille which will likely have a honeycomb insert. The headlights seem to be slightly swept back while the bumper has a really angular design with angular side intakes. Another interesting part about the car is its hood. It looks like the Veloster N will boast hood-vents which is really unusual. The four-doors will stay but this time around the car’s coupe-like roof-line will be less obvious. In the rear it seems a dual exhaust will be used while the rear window will larger than that of its predecessor. 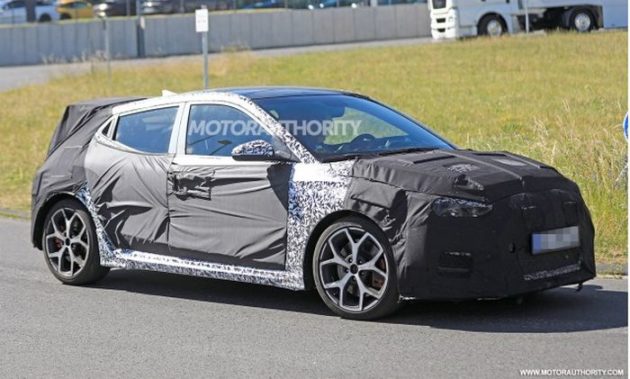 The interior is still well under wraps. Despite that we can safely say the car is likely going to share the most of it with the smaller i20. The big difference between the two will be the seats. These should be far more supportive in the 2019 Hyundai Veloster N and they should be fully electric too. A digital instrument cluster might also be used for the first time on this model.

Unlike all the other versions of the car, the Veloster N will offer a really powerful engine. It looks like the car will boast a 2.0 liter turbocharged inline-four gasoline engine which has been tweaked by Hyundai’s N-division. This engine is expected to boast over 250 horsepower and 260 lb-ft of torque which are all going to be sent to the front wheels. Unfortunately it looks like a manual gearbox is not going to be available. Instead, the Veloster N is expected to be offered with an 8 speed dual-clutch automatic only which is a real shame as a manual would have been far better in terms of driving experience.

It seems that 2022 Hyundai Tucson is coming our way judging by these spy photos. The prototypes spotted are wearing …

The new 2017 Hyundai Tucson was unveiled at the Geneva Motor Show, earlier this year. This small SUV will feature …

After the i30 was restyled for the 2015 model year, Hyundai decided to wait no longer and release the brand …