Ever since the Dakota was discontinued, the FCA Group has been left without a medium-size truck on the market. However, this is going to change in the near future as a brand new truck will be released. The interesting part is that the new truck will not be a RAM but rather a Jeep. That’s right! After more than two decades since their last truck, a new one will be released with the upcoming 2019 Jeep Wrangler Pickup. Up until last year, this was nothing but a rumor. However, since then the new truck has been spied numerous times so we do have a pretty good idea about what it will feature.

The Wrangler truck is going to be based on the same chassis as the Unlimited version of the Wrangler. This means it will boast live front and rear axles, coil springs in the front and leaf springs in the back. Even though at this point the details are still scarce it seems the new truck will share its wheelbase with the Wrangler as well. However, it will be quite a bit longer. From the spy shots it seems the Wrangler truck might just be the longest truck in its class and one of the wider models as well. So far we have only managed to see the four-door version of the new model. Despite that it seems a regular single-cab, as well as a crew-cab, will be added down the line. Multiple bed lengths as well as multiple wheelbases might also be offered. 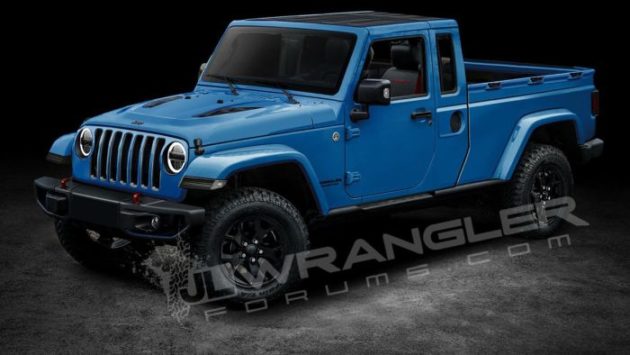 Even though it may seem like it, the 2019 Jeep Wrangler Pickup is going to be one of the most interesting models on the market. It fact it will be a unique truck with a unique styling and a unique set of capabilities. Unlike most others, the Wrangler will offer the iconic off-road capabilities of its SUV sibling. On top of that it will be able to tow more and carry more thanks to a revised suspension system and likely heavier-duty components. This will also affect its weight. So far it seems the Wrangler might just be the heaviest, and the largest, medium-size truck on the US market. 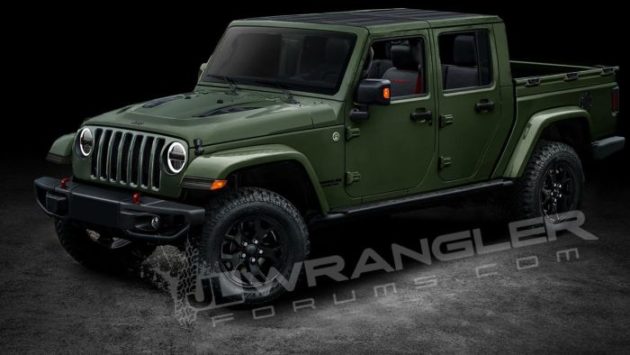 The Wrangler pickup will be quite similar to the SUV. From the latest spy shots it seems the early rumors were true. The front end of the truck will be identical to the SUV. The two cars will share the same grille, headlights, fenders and hood. However, this is where most of the similarities end. For starters, the cab on the truck is much smaller than on the SUV. This is true even for the four-door version which offers a rather small cab. The rear will feature a large bed which seems to be just as wide as the cab. This means the fenders will extend further out which is a trademark look of the SUV. The tail lights are likely going to be quite similar to those found on its sibling too.

Here the truck Wrangler is expected to get the same dashboard design as its SUV counterpart. However, the materials as well as the features are expected to be slightly different. For starters, it seems the truck might receive tougher materials in order to withstand abuse better. On top of that we should see truck-specific features such as a trailer braking system, likely a 360-degree camera system and even a set of auxiliary switches. While the front passengers will benefit from quite a bit of space, those in the rear will receive considerably less due to the size of the cabin. 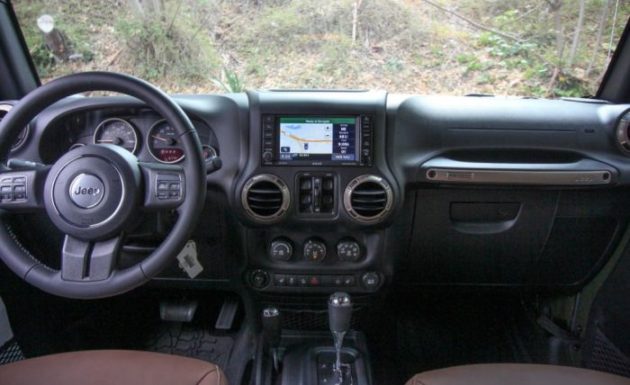 Wrangler Pickup Specs – Under the hood

The 2019 Jeep Wrangler Pickup is expected to hit the market powered by three different engines. The base model is likely going to be powered by the same 3.6 liter naturally aspirated V6 as the current Wrangler. This is set to receive a small bump to around 310 horsepower and over 270 lb-ft of torque. Further up the range we should see a new 2.0 liter turbocharged inline 4. This engine has been in development for a while and it might be the best companion for those not needing towing capabilities. With around 300 horsepower and 300 lb-ft of torque and better fuel efficiency than the V6, it should be a real winner. The top end model is likely going to come with a 3.0 liter turbo-diesel V6 with over 240 horsepower and 400 lb-ft of torque, perfect for those needing to tow large loads.

Any form of Jeep pickup was absent from the market for almost 25 years. The wait is finally over, but not just yet. Mike Manley, the CEO of Jeep previously stated that pickup version of Wrangler would follow the regular version. This decision was changed. 2018 Wrangler will arrive during this year, most likely in the last months. The pickup will, on the other hand, enter as 2019 MY somewhere in 2018. Manley also said that the priority, like always, is the Wrangler SUV. When they complete this vehicle and are made sure that everything is top notch, the truck will come into focus. All that remains is to wait for more news.

The information regarding the price is unavailable. For comparison, we can use the price of its SUV counterpart. With this in mind, we can say that 2019 Jeep Wrangler Pickup is going to start in the region of $30,000. This starting price is a bit above the SUV, which is expected. Also, this estimation counts for the base model. With more power and equipment the price will only go up. It will be in the region between $30,000 and $45,000. This is also in accordance with the prices of the competition. The rivals of this upcoming pickup truck will be Honda Ridgeline, Toyota Tacoma, GMC Canyon, Chevy Colorado, and Nissan frontier.

If you are a proud owner of a Jeep vehicle, we suggest you visit jeepequipment.com, a website with a lot of good tips, tricks, reviews, and spare parts for Jeep vehicles!

The Jeep, once a king in the off-road vehicle manufacturing, gave in to the mainstream paradigm. This happened because Jeep …

03/06/2017 UPDATE: A prototype of 2018 Jeep Wrangler has been spotted once again. This time around spy photographers have caught …