Because trucks and crossovers are more and more successful, there are more and more manufacturers trying to enter the segment. Not that long ago the French manufacturer Renault showcased the Alaskan truck. At first it was nothing but a concept but then they released the production version which is, unsurprisingly, a rebadged version of the Navara. The truck does get its own flair but it still is a more expensive Navara which may hurt its sales in the future. Unlike some of their other models, the 2018 Renault Alaskan will become available in Columbia and it will spread shortly after that. It is expected in Europe, Africa and some parts of Asia as well.

The basic chassis of the Navara remained unchanged which means it still offers the body of frame construction, the rugged suspension system and its great engine. The Navara currently retails in the UK for £22,000 for a base model. It seems that the Alaskan might be quite a bit more than that. Some rumors even suggested closer to £25,000 in which case it would become interesting to see what Renault will offer more than Nissan. The truck will likely become available for sale in Europe in the late 2017 and it should become available in the rest of the World by 2018. 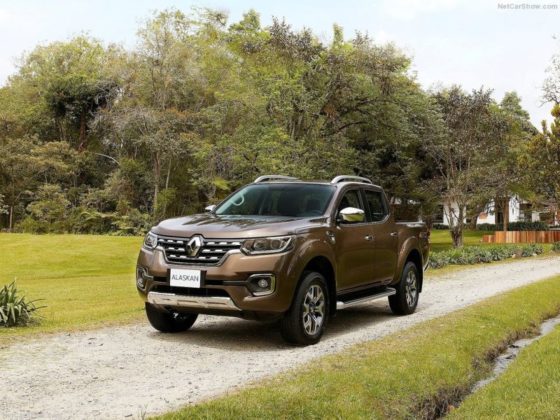 The design of 2018 Renault Alaskan

The 2018 Renault Alaskan is interesting to say the least. While it does get the body of the Navara, Renault worked on its front and rear ends in order to make it more interesting. The front of the truck features a large grille, similar to what Renault has on their newer cars. The headlights feature wraparound LED daytime running lights which actually extend the lines started by the grille. The fog-lamps are surrounded by C-shaped chrome inserts and both in the front and at the back there are silver metal shields. The large Renault badge in the front is quite imposing and the truck’s new tail lights do complete the look. Unlike the Navara, it seems that the Alaskan will only be available in a crew-cab configuration.

There are no surprises here either. While we would have loved to see Renault’s own design here, the Alaskan is mostly identical to the Navara. Even the steering wheel is the same with the only difference being the badge and the airbag housing. The instrument cluster is nicely laid out, there are plenty of blank buttons around the cabin and the wide center stack makes everything look complete. The Alaskan will come with a basic radio and MP3 player but buyers will get the chance of a 7 inch infotainment unit which can also be seen in Renault’s other cars. It still is unclear at this point if Renault will offer a more road-oriented version but considering what they want from it, this is highly unlikely.

Under the hood or Renault Alaskan 2018

The 2018 Renault Alaskan will be available with a single engine choice and not more like the Navara. This will be the 2.3 liter twin-turbocharged inline 4 diesel which will offer up to 190 horsepower and well over 300 lb-ft of torque. Some rumors suggested that the lesser single-turbo version with 160 horsepower might be offered at a later date. The engine will come with a six speed manual gearbox as standard while a seven speed automatic is going to be an option. Some markets will also receive a 2.5 liter diesel which is an older generation unit. This will be offered in less developed areas that need a highly reliable engine. Unlike the others, this one will only come with a six speed manual. Rear wheel drive is going to be offered as standard while all wheel drive will be an option.