New 2019 Ram 1500 will debut at the beginning of 2018, but that isn’t the only truck on which company is working. 2018 RAM HD Power Wagon is also thoroughly tested. The latest spy photos are showing a Ram 2500 Power Wagon which will feature a small facelift. For an entirely new truck, we will have to wait few more years, but let’s see what will this slightly updated version offer.

Under the wraps that cover the front end of this vehicle, you will find standard Ram crosshair grille. The same grill features on the ongoing model, and it will probably be there for any upcoming Ram vehicle. The changes we mention will occur on the lower fascia and around the headlights. Regardless of the camouflage, the new HD Power Wagon looks very much like the current model. The fenders under the covering are painted black, which suggest that there is the possibility that new fascia is tested on the ongoing version. 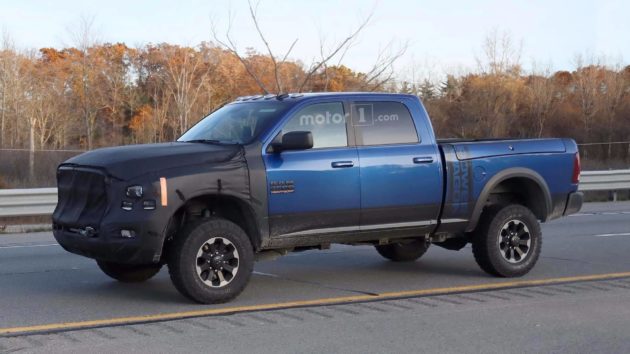 From the things that we love on this truck, and one that won’t change with the upcoming model, there is a Hemi V8 unit equipped with 410 horsepower, and 12,000 pounds warn winch.

07/27/2017 Review: Despite being released in 2010 it seems the heavy duty version of the RAM will be kept on the market for at least a few more years. In fact not that long ago the upcoming 2018 RAM HD Power Wagon has been spied testing and it seems the changes have been kept to a minimum. Even though the official details are still scarce, it seems the RAM will get more power, a more up to date design and a few extras which were previously unavailable. The end result should allow RAM to remain competitive for a few more years until a brand new generation of the HD2500/3500 will be released.

So far it seems the new Power Wagon will not change much over the ongoing model. The chassis is more than likely the same as before. This means the Power Wagon shares its running gear and ladder frame chassis with the HD2500 or the 3500. This means it should be more than capable of towing north of 12,000 pounds. The heavy duty construction also means heavy duty shocks, springs and axles. These should go great with the Power Wagon which is meant as an off-road machine rather than a workhorse. The beefed up suspension components should take the stress with ease making the truck one of the most reliable models in RAM’s range of trucks.

From the early spy shots it seems the upcoming 2018 RAM HD Power Wagon might get a slightly better suspension system than before. The truck seen testing had blue shocks as well as larger than usual differentials front and back. However, it still had the regular 17 inch rims which suggests the brakes didn’t change much from its predecessor. 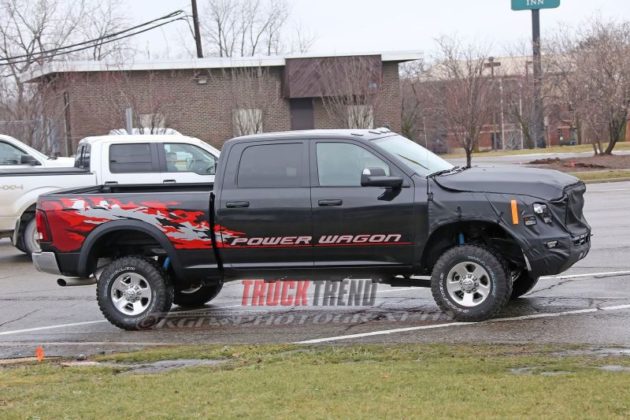 One of the largest differences over the previous model has to be the way it looks. Even though it won’t be that dramatic, the upcoming Power Wagon will definitely look different. For starters, it will now have quite a bit more in common with the outgoing HD1500 trucks. This means it will get the same hexagonal grille, the new slimmer and slightly curved headlights as well as the new fog-lamps locations. These alone should make the 2018 RAM HD Power Wagon a bit more up to date when it comes to its styling. Even though it still is unclear, the truck may also receive a large hood scoop. This has been rumored ever since 2016 and it might finally happen. This would give the truck a bit more cooling capacity and it would definitely elevate the way it looks. The rear of the truck doesn’t seem all that different from the previous year. Here a new set of tail lights as well as a slightly different exhaust can be expected. 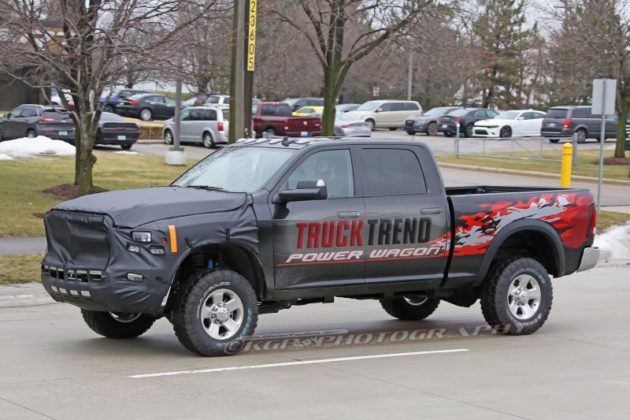 Inside the cabin of new Power Wagon

The interior of the HD Power Wagon, as well as that of the other HD models, is definitely not going to change all that much. We will likely find here a new steering wheel, similar to that in the Chrysler Pacifica, as well as Chrysler’s newest infotainment system which not only offers better software but also a better screen and touch-interface. A few new extra safety features such as a frontal collision avoidance system might be added into the mix as well.

Most rumors suggest the upcoming 2018 RAM HD Power Wagon is going to be available with two different engines. The base model will come equipped with a 6.4 liter naturally aspirated HEMI V8 good for around 410 horsepower and 429 lb-ft of torque. The option will be the already well known inline-six Cummins turbocharged diesel. It seems this engine will receive a power bump over its predecessor. This will be achieved with the help of a revised engine management system as well as a different exhaust. These should allow RAM to push the output to north of 385 horsepower and 930 lb-ft of torque which would easily make it the most powerful in its class. As before, all versions of the Power Wagon are set to come as standard with a 6 speed automatic which will send the power to either the rear or all four wheels. It seems an 8 speed gearbox is still unlikely on the heavy duty version of the RAM which is a bit of a shame. 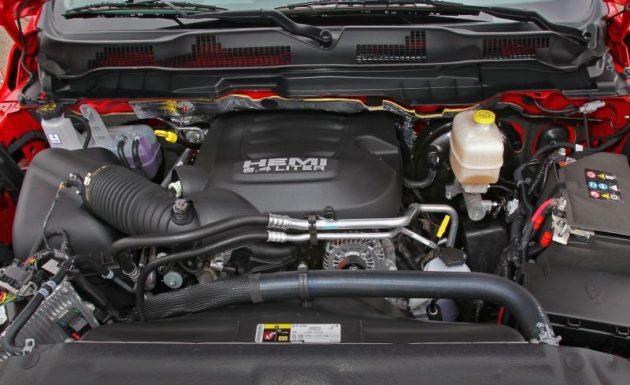 Although reports suggested that 2018 RAM HD Power Wagon would be presented during the first months of this year, this didn’t happen. We don’t know the reasons for the delay, but this vehicle should be arriving this year. We are not sure for the exact date, but RAM company has given signs that the truck lineup for 2018 will be shown during this year. It is strange that after the spotting of the first test mules there were no signs of other prototypes or even a final product. Despite this we know that 2018 HD Power Wagon is on the way, we just need to wait for it a little longer. Stay with us for more news.

Considering that entire RAM lineup will be revamped in the next few years the price of the upcoming Power Wagon won’t change too much. With a minor facelift, minimal interior, and no powertrain change the price has no reason to rise. Staying close to the current version means that 2018 MY will start at a base price of $48,315.

Since the Dakota has been discontinued a few years ago, Dodge didn’t really have a small compact truck to offer …

Trough history of pickups, its buyers expected a lot from towing capacity, they wanted large payload, and torque to support …