Home
Pagani
2017 Pagani Huayra BC – the Best Huayra Ever

The 2017 Pagani Huayra BC was released back in March 2016 at the Geneva Auto Show. The car’s name has been actually given by Pagani in order to commemorate their first customer, Benny Caiola. The car is the hardcore version of the original and comes with more power, a rather impressive aerodynamic kit and one of the best looking exteriors ever made. The car was sold for little over $2,5 million and all 20 units were sold before the car was released. However, not everything is lost mainly because Pagani is also going to release a convertible version of the same car. The Huayra BC Roadster is expected to debut in the early 2017 and it is expected to cost in excess of $3 million. Because of that it would become one of the most expensive new cars ever made and it should give collectors a really good run for their money. It still is unclear how many units Pagani is going to build but at this point it seems only 20 will be sold.

Well, all the Pagani cars are built in a factory with just 55 employees. This means that Pagani himself can supervise the build process. The Huayra is also one of the very few cars that are still built by hand. The car is using a rather impressive carbon fiber tub which is then covered by a carbon fiber skin. The entire car weighs just under 3,000 pounds while the BC is even lighter at little less than 2,750 pounds. This makes it one of the lightest hyper-cars ever made which is quite impressive. The 2018 Pagani Huayra BC Roadster on the other hand is expected to be around 100 pounds heavier due to the extra reinforcements used in the chassis but it will still be well under 3,000 pounds. 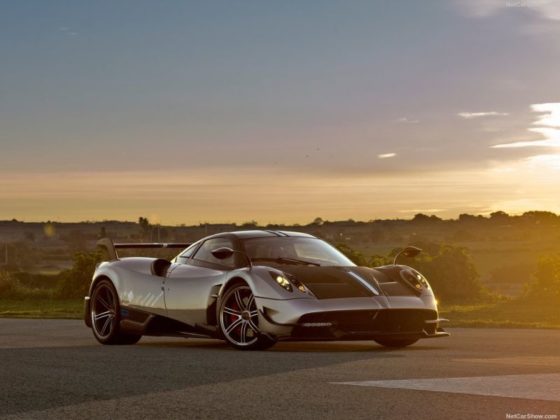 Specs of 2017 Pagani Huayra BC

The Huayra BC uses a 6 liter twin-turbocharged V12 gas engine developed, and built, by AMG in Germany. Even though the engine is in fact based on a Mercedes powertrain, it has been developed specifically for the Huayra and its BC high performance version. Unfortunately though Pagani had a set number of engines dedicated for him. This means that after they build the Huayra the contract will end and they will have to turn either to another manufacturer or to AMG for a new engine. The 6 liter twin-turbo V12 from the BC offers 739 horsepower and 737 lb-ft of torque.

While this may seem down on power in comparison to its rivals such as the LaFerrari, the BC does not have a hybrid aid. This means that the power is delivered in a rather predictable way and the driving experience offered is superior to its rivals. Unfortunately though, even though it has plenty of power and it is quite light, the Huayra BC still can’t match its rivals. On a track it is usually faster but only because most of its rivals struggle with traction. In a drag race or even a faster track, such as Nurburgring, all the three main hyper-cars of today outrun it. This will not change for the roadster which is to be expected, especially now when it will add up to 100 pounds.

Most people who bought a 2017 Pagani Huayra BC got it for the way it looked. There is no denial about the fact that the Huayra is one of the best looking cars ever made. The BC version has to do without some of the interesting parts of the car but it still looks amazing. The front end features a massive splitter, the wheels are wrapped in high performance tires, the sides feature massive intakes and the rear end has a massive fixed wing. All the active aerodynamic features are gone but the new fixed ones offer better downforce while being considerably lighter.

Unfortunately Pagani decided to use black carbon fiber on the car which does look good but it does take from the subtle beauty of the original. The cabin is similar to that of the regular Huayra with some changes. There are a lot of red accents throughout the cabin and the usual leather and aluminum are all gone. Instead Pagani decided to install carbon fiber and Alcantara which are both lighter and more suitable for a race car.