It comes naturally that after new Silverado was spied a few days back, that the photos of 2019 GMC Sierra will reach the surface. Same as with 2019 Silverado, the latest Sierra photos are our best look at this truck up to date. Like you can see almost all parts of the previously used heavy camouflage are gone. Hence, the bodywork can be seen with more clarity. The first look gave us the impression that both Silverado and Sierra will be different from their ongoing versions.

In years past GMC vehicles were considered to be a Chevrolet rebadged into GMC brand. Those who thought like that were partially right. Now, in the last few years, and car mid-cycles things change. With every new model, the difference between the two is more significant. From these photos of the 2019 Sierra, the grille looks much larger than it’s on its sibling Silverado. In the space between the hood and the grille, there seems to be a small inlet. A feature which is not available on Chevy’s truck. Side profile reveals even more dissimilarities. Both the fenders and the bed are different. The wheel wells on the Silverado are round at the rear, while on 2019 Sierra they come in square shape. 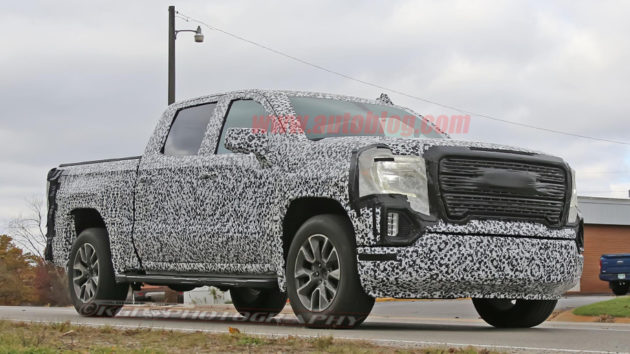 At the far end, there are fewer differences compared to the rest of the truck. The exhaust pipes are facing rear on both models. The taillights also have almost same shape. The bulge in the middle of the tailgate is hiding GMC badge, while on the other truck it hides Chevy’s.

This is all with this update; more info will come to us during upcoming auto show season. For more info about 2019 GMC Sierra, read the rest of our article.

09/12/2017 Review: After being around for nearly 5 years, it looks like GM’s half-a-ton truck is about to receive a major update. Even though so far Chevrolet and GMC kept quiet about their future trucks, these have already been spied on the open road and the results seem quite impressive. It looks like the new model is going to be released with the future 2019 GMC Sierra. Even though the changes might seem minimal at first, this is not really the case. The trucks are expected to feature new technologies, better fuel efficiency as well as considerably higher towing ratings. Thanks to that the new Sierra might finally become the leader of its class alongside the Silverado.

Inside sources suggest the truck will benefit from an entirely new ladder-frame chassis. So far GM didn’t say anything about this which likely means it is true. It looks like this chassis is a fully boxed-in frame which will be made out of ultra-high and high strength steel. This massive change would give the Sierra considerably better structural rigidity than before without affecting its total weight by much. On top of that, it looks like the new truck may use an all aluminum body. 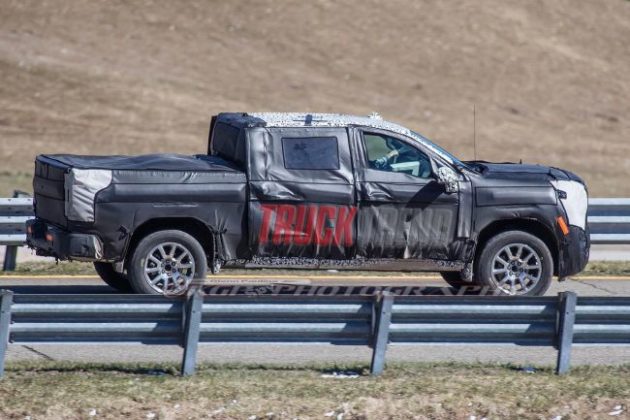 This comes as a huge surprise because GM has been heavily criticizing some of their rivals for using this technology. Even so, it looks like the gains are much bigger than that so they are going to use it on their future trucks. This alone should allow the new 2019 GMC Sierra to be with up to 700 pounds less than before. Some also suggested the bed might still be made out of steel in order to retain as much durability as possible. This remains to be seen if it will actually be used on the production version.

The spotted mules of the upcoming 2019 Sierra are still heavy on the camouflage, so the release date is not so close. We should expect new Sierra in the first months of 2018. The stage in Detroit is a possibility, but also the debut might happen later in the year. GM is working simultaneously on both the Sierra and Silverado, but we don’t know whether will both of them debut in Michigan. More will be known in the following months so stay tuned as we update this article.

The GMC Sierra comes in various shapes and trims and as such has different prices for everything that it offers. The range is so broad that the entry level 2WD Regular Cab costs $28,700 while on the other end you have 4WD Crew Cab Denali priced at $56,000. The prices for 2019 MY will remain in this range with slight adjustments possible. 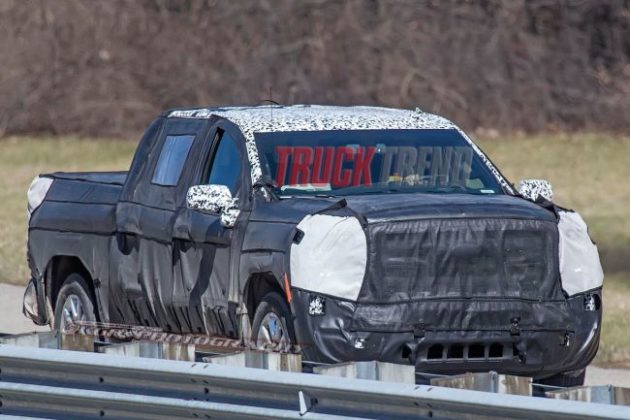 The camouflaged prototype of the new Sierra gives us a pretty good idea about how the truck is going to look like. In the front it seems it won’t receive the same grille or even the same headlights as its predecessor. Instead, the new truck definitely boasts a slimmer grille and larger headlights. On top of that we can clearly see an intercooler intake in the bumper but more on that later. On the sides we can also see curvier wheel arches as well as less bulky lines than on its predecessor. This move has likely been made in order to make the Sierra a bit more appealing to a wider market audience. In terms of size the new Sierra doesn’t seem that different from its predecessor which is to be expected.

The interior of 2019 GMC Sierra

Likely one of the biggest upgrades on the upcoming 2019 GMC Sierra is going to be its cabin. So far it seems like GM will install quite a bit more technology than in the older model. Expect a much larger infotainment screen, a better hardware for the navigation system and even a digital instrument cluster. The truck is also expected to offer far more safety features in the base trim levels. Things like frontal collision and avoidance system or a lane-keep assist are expected as standard. So far not much has been said about the materials used inside. It looks like the upcoming 2019 GMC Sierra might finally become the premium product it was always meant to be. 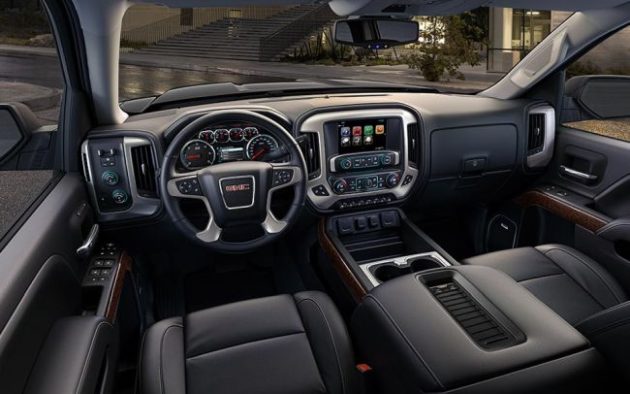 The most important upgrade here is going to be the fuel efficiency. The new Sierra is expected to be with up to 10% more fuel efficient than its predecessor. This would be a huge step forward for GM which has been struggling with their past trucks. This improvement is expected to be made with all new engines. The base trucks are likely going to receive a new 3.0 liter twin-turbo V6 instead of the older 4.3 liter engine.

This should provide around 300 horsepower and over 330 lb-ft of torque, enough to outrun its main rivals. Higher up the range, the old 5.3 liter engine might be replaced with a 3.6 liter V6 offering north of 400 horsepower and 400 lb-ft of torque. Both of these are expected to be mated to GM’s new 10 speed automatic and either the rear or all four wheels. Some also suggested a diesel but considering the latest turn of events, this is highly unlikely.

The Sierra is the more expensive, and usually better equipped, brother of the Silverado which not too long ago it …

Although many of us would thing that all GMC models come with a long history behind them, some of them …